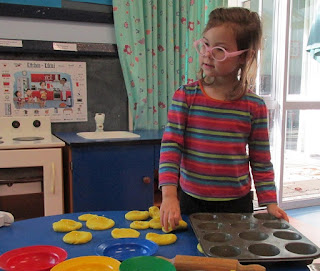 Tuesday 4th: We were especially glad to get out the house to the Champion Centre again today. Asher is getting a bit of cabin fever with missing her hours at preschool.
This afternoon we got a surprise call to ask if we would like 5 chooks, including their cage. They are moving and have decided it's easier for the chooks to stay in the area. So we were so very grateful that they thought of us. Brendon was able to pick them up after work (and I got the photo below on Wednesday). They normally spend the morning in their cage and then enjoy the garden in the afternoon. I was a little nervous about our property, hoping they would stay close - which so far they have. We also decided to put their cage close to the house so that it's easier for kids to collect eggs and check their food and water. It's also nice to be able to see them from the kitchen window.

It just means that I feel sorry for them in their, and they get let out earlier than what they are used to. :-) Hopefully those who have not laid by the time I let them out, will come back to lay.
Wednesday 5th: At 7:45pm Asher had a 1 minute Tonic Clonic. I had just said goodnight to her minutes before, and it just got to me more emotionally. 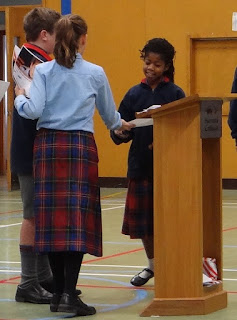 Perhaps I wonder if I had missed some of it on the monitor. Brendon pointed out that I must be grateful we got the monitor on straight away and that I did notice. I think it's just harder when you are not there when it starts. At least she didn't have a fall with this one.
Ruth at full school assembly today - very pleased to be among the top 5 fundraisers for their 40-hour famine. She did so incredibly well. She raised $260. The school's goal was $1,500 - which they reached. It was great that Ruth herself was able to raise 1/6th of their goal.

Thursday 6th: Asher had a 1 1/2 minute TC at midday today, just before her new carer left. So one advantage was that the carer got to experience it. She again had the extra 10 seconds of jerking around 30 seconds after it had stopped. This has been happening since the end of May and is rather unpleasant to witness. I took this photo during her nap. Little Miss was already on the bed when I brought her, but once Asher was settled, Little Miss had come up closer to cuddle up right next to her. 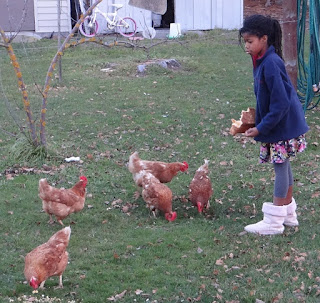 And then we were again thankful for the video monitor we have as she had a 1 min TC at 8:30pm. She had a lot of shivering, shaking and jerking after this one.
Ruth enjoying "putting the chooks away" this evening. We know they will go on their own later, but feel better knowing that they are in before it's really dark out. Ruth also enjoys getting them to follow her (with the help of bread crumbs).
Friday 7th: Thankfully Asher had a good night but at 8:15, just as I was getting ready to take the kids to school, she had a 1 min TC. This time she had a full minute of jerking after the seizure. Previously the real jerking would only last around 10 seconds. We don't really know what is causing this. Rachel sat with her so that I could get the children to school (although a little late).
She woke at 9:15, just minutes before a different carer arrived. 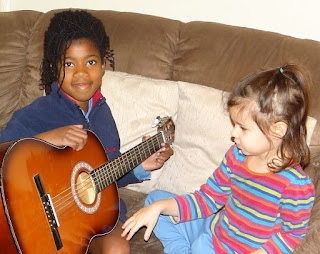 And at 9:30 she had a 2 1/2 min TC. I head the thud of her fall from the kitchen, so the carer didn't even have time to call, I just called "I'm coming". She is having such a rough time. That's 8 seizures within the last week (after only 6 in the whole of June).
Asher enjoying playing a bit of guitar with Ruth this afternoon. We discovered that Ruth had gotten tired of Asher just strumming on this guitar, so she re-tuned it to be more like a harp (the strings are all in one key). Now we finally understand why it sounded so nice when Asher fiddled on it. Good thinking Ruth - and good skills too (just tuning it by ear to sound so nice).
Saturday 8th: Wonderfully Asher had a day without seizures today. At this point each day without is treasured.
Photo below: Enjoying playing cars with Hezekiah today. 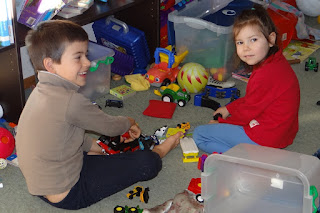 Sunday 9th: She had a seizure free day but it ended with a 2 minute TC at 8:15pm. It changed after the first minute and seemed to stop at 2 min. The jerking that she has had afterwards was a bit different this time. It was very violent and we were not sure if the seizure had actually stopped. We stopped timing eventually at around 5 minutes, as we just didn't know what was going on. It took her a long time to finally settle down to sleep, with lots of shivering and jerking. Brendon lay with her so that I could carry on and finish off Ruth's hair that I had been re-braiding.
The rest of Sunday's photos are from a bit of a party that Ruth had with a few friends over to celebrate her birthday. I'll leave those photos for their own post.
10
Posted by Buckland at 10:00 PM