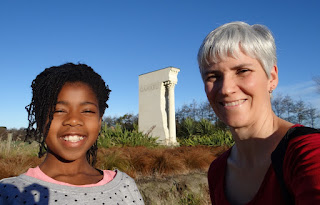 Monday 10th: An unpleasant start to the day with Asher having a 1 minute TC at 6:30am. She had been lying on me since before 6 and her jerking was getting so bad that I had actually asked Brnedon to get her morning meds (to give them a bit early). While he was getting it, the seizure started. What made it horrible was that after half a minute break, it started up again (although different) and went on in total for 13 minutes before she finally went to sleep. It looked far more like seizure activity this time, so we gave her the extra meds at 7 minutes.

By 8am Ruth and I were on the road down to Oamaru (around 330km away). She had an appointment after lunch to do blood analysis under a dark field microscope. Glen has a clinic in Auckland and was suggested by friends. We were pleased to hear he has a clinic in Oamaru every couple of months. Much easier than trying to get to Auckland. I tried to take as many notes as I could, but didn't think at the time of taking a photo of the screen as he showed us things. So I got some photos on-line to give a bit of an idea. This first one shows closer to how health red blood cells are spaced and shaped. All next to each other and nice clear circles. 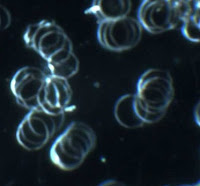 Ruth's looked more like this photo (although not as bad). Most of her cells were in twos. This immediately indicated that she will have low energy as the cells are stuck together and so can't get as much oxygen (from all their sides). He could also see that her body is having to re-make red blood cells every month rather than every 4 months. On a closer look, it's also clear to see that many are mis-shaped (with bumps around them) and some were even flattened (more oval than circles). So he explained what we were seeing and what causes the change. He would also mention what "symptoms" these variations would cause - and many were exactly what Ruth struggles with. He could tell she has low iron, chronic inflammation, allergies (hayfever in her case) and malabsorption of her food.
On blood tests her B12 was excessively high but he explained that she was actually low on B12 because her body was just storing it (thus high on blood test) but not absorbing it at all (therefore actually needing more of it). 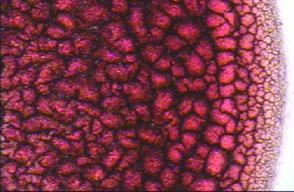 So she got a B12 supplement that is absorbed in the mouth, directly into the blood stream, to help with this. She got a number of other things to help with healing of her gut and lifting the levels that are low.
We also looked at a few dry blood samples (just an example on the right). He could clearly see that she doesn't drink enough water as there were white cracks through the sample (she has not been drinking at all lately). Thankfully she didn't have as much toxins (the black areas) as many children he sees, but she still does have - mainly due to her gut being compromised. 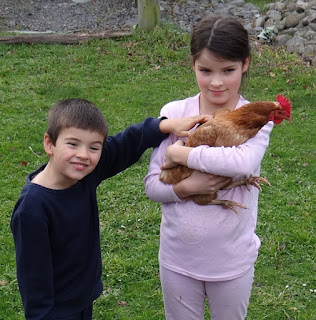 Ruth has had the low iron and inflammation for many years (since she was a toddler really) and the doctors don't really have any idea how to help (other than suggesting arthritis medication which is like chemotherapy). Her joint pain has increased over the last year, so we really do pray that this will help her.
Glen also suggested two products for Asher. She has been jerking so much today that Brendon eventually called the hospital for advice on what to do. They have suggested giving her a double dose of meds at night for 3 nights and then re-evaluate (possibly then needing to give a double dose in the morning as well). I'm really hoping these products can help, as it's always so hard putting extra toxic medication into her little body.
Tuesday 11th: Hannah enjoying holding one of the chooks for a bit today. 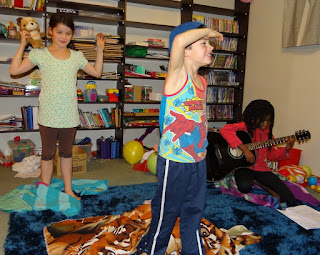 This evening we were invited to see a show by the "blanket band". First was "Where oh where has my little dog gone." Hezekiah was looking and Hannah was the dog. 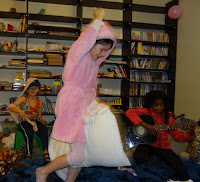 Then "She will be coming round the mountain when she comes". This verse was "she will be wearing pink pyjamas". 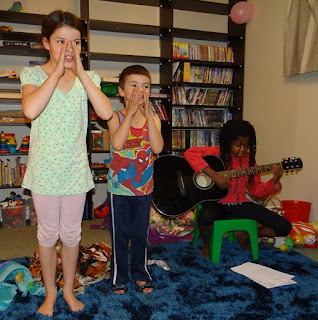 Then "On top of spaghetti" where Ruth did most of the singing and Hannah and Hezekiah whispered the endings of each line. 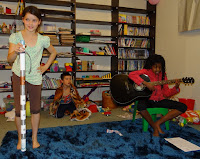 The last item was "This old man" where Hannah was the man and Hezekiah was the dog that kept getting a bone.
Thanks Ruth for creating such a fun afternoon for them as they practiced. We enjoyed the show too.
Wednesday 12th: Rachel had a day out with the St John competition teams in town today. There had been a lot of talk of all the snow that was coming, but it wasn't as much as we hoped. 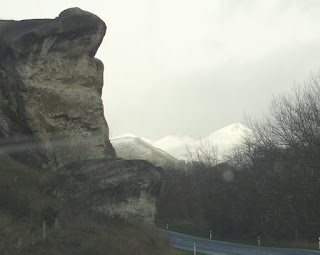 The mountains through the Weka Pass did get a bit of snow and did look very pretty.
We spotted a higher mountain behind Frog Rock which looked loved solidly covered in snow. The mountains around our home were completely white like this, but as it was still very overcast we could get any photos of them. 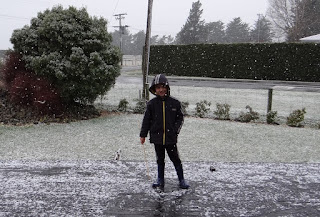 So much excitement every time it actually started to snow. This photo was around midday. We really thought it would start  settling well around the garden now, but id didn't last long.
Just a few km down the road towards the mountains there was a lot of snow, but we just missed it this time.

The chooks had come up onto the deck on Tuesday a few times, so we decided to move their cage up here so that they could have more protection from the cold.

It didn't snow as much as we thought it would, but I'm still glad we moved them up here. Now we don't have to wait till midday for them to lay, as they are laying as early as 9am. Once they have laid their eggs we let them out - so they are enjoying the extra time in the garden. Although they still often come up here when it gets a bit too cold out. 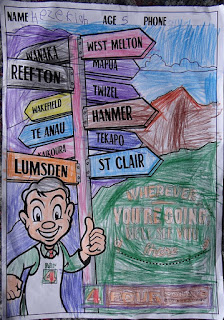 Thursday 13th: When we went to fetch Rachel today Ruth and Hezekiah handed in their colouring in competitions. I was so impressed with Hezekiah's one. He put so much effort in. Especially with the 4 square man. He has never enjoyed colouring in and it was often a problem at school as he would rush to get things done, use just one colour to do a whole picture and not bother with keeping in the lines. 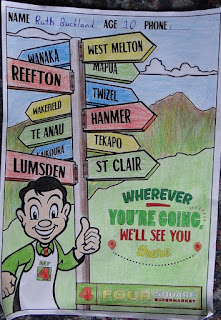 So when I look at this it just amazes me. Well done Hezekiah.
Ruth put a lot of effort into her one too. She would love to win one of the mini iPad prizes - so she always puts a lot of effort in. And it shows. Beautifully done Ruth. 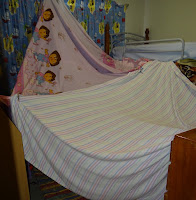 Friday 14th: Ruth built a massive "fort" in Hezekiah's room today. Without the snow to play in outside, it was just cold. So it was nice that they had some good ideas for inside play. Thank you again Ruth for getting something started for them.
After 3 nights of extra meds Asher's jerking was still continuing. We decided to just give it a day or two before considering the extra morning dose (as we notice negative effects if she has double dose during the day). So we went back to normal dose on Thursday and were so very thankful when there was huge improvement on Friday. 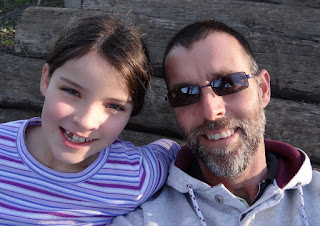 We had worried that it would get worse with less medication in her system. What an answer to prayer. It had been a really hard week with all her jerking, not knowing what was causing it. Time will tell if the supplements are helping. We were just relieved to not have to keep giving her extra doses of her AEDs.
Saturday 15th: Rachel had St John competition training today, so Brendon and Hannah used the pick up as an opportunity to have an outing at the Amberley park.

In the evening Ruth got Asher and Hezekiah doing some "exercises" with her before bed. Asher copied nicely putting her legs up and then her arms. 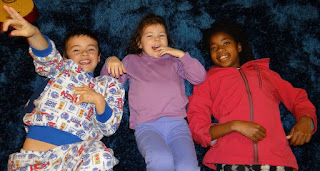 Sunday 16th: A change of plans for today as Brendon started feeling terribly nauseous through the night. It looks like it may have been a 24 hour tummy bug. As Brendon doesn't easily vomit, it tends to be really hard on him. He spent almost the entire day in bed. 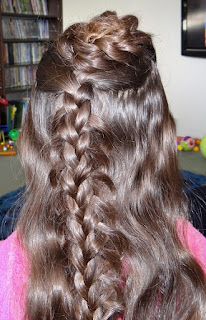 Asher had a 1 minute TC at 2pm. The extra jerking started again a little after it had stopped, but thankfully only went on for about a minute. We were so relieved. We are also thankful there haven't been any more seizures this week (since Monday morning) as that jerking kept me on edge the whole week. Now we just pray that the tummy bug doesn't go through the whole family, and that Asher especially can avoid it.
Rachel did Ruth's nails today and Rachel and Ruth also spent time doing Hannah's hair in different styles. I've started just doing 3 braids at a time of Ruth's hair (rather than doing 6 to 8 on the weekend). We can generally get 3 done within an hour. We had 5 sessions this week (managing 5 on one of the days) so we got 17 done this week. Just 113 to go. At 3 per session that's another 37 sessions. I'm hoping to get it done before it gets totally uncomfortable with my big tummy in front of me. In total it will be around 90 hours of work to undo and re-braid it all. I'm glad we are already over half way.
Posted by Buckland at 10:00 PM