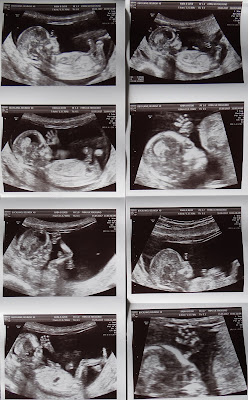 Monday 15th: I had an appointment with Foetal Medicine this morning to discuss the results of the 12 week scan and blood tests. With my age and the fact that baby's nasal bone was not visible on the 12 week scan, I am at an increased risk of baby having Down Syndrome. With previous pregnancies I have not really been concerned about assessing the risk. With having a special needs child already though, I wanted to be more mentally prepared. The doctor was lovely and explained all the aspects of the testing. She told me about more accurate blood tests that can be done, but as they are very expensive I said we could not afford them.
She then asked if I wanted to have a look at baby. Yes, of course! :-) So we headed next door for another scan. It was lovely to get to see baby again, growing so nicely. She asked if I wanted her to check for any Down Syndrome indications which I did. Again she was not able to see the nasal bone and another negative was that the middle bone of the small finger was also not visible. On a positive note though - baby's arm and leg measurements were looking perfect (with Down Syndrome they are often a bit slower in developing).
While on the topic I will finish the details of the rest of the week. 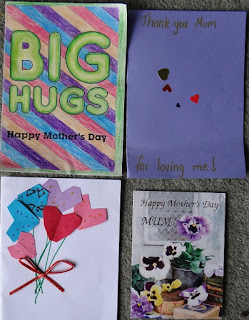 On Tuesday evening I got a call from our local Doctors rooms. They had gotten the referral report from Monday where the doc mentioned that the blood test was recommended but not done due to cost. To our utter amazement - the doctors rooms said that they would like to use some of their extra funding to pay for the test. So on Thursday morning I was able to head back into town for the tests. They had to be done at their lab as they need to be sent overseas to get done. The results will take around 10 days, so a bit of a wait ahead for more info. I felt so very blessed by the support that we have. Our journey with Asher is a hard one - but made so much better by all the wonderful people around us who give help and support in so many ways.

And now back to Monday. Or even Sunday. This year I got so many mother's day cards and gifts. Thank you to Brendon and my precious children. I love you all so very much. 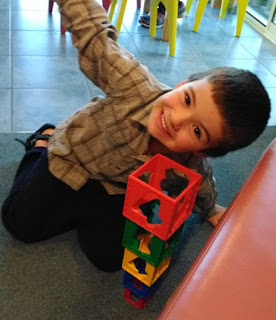 Hannah was the only one who went to school today as the others all had coughs. Ruth had developed a fever on the way home from the Sampson's yesterday and was feeling really sick this morning. So in the afternoon we took the 3 sick ones (Ruth, Hezekiah and Asher) to the doctor to just get them checked out (especially chest, heart and ears).
Although Hezekiah has been coughing for 2 weeks now, as seen in this photo, he is feeling fine. The cough has gotten worse over the last couple of days, so I wanted to just check that his chest was clear. Asher was so busy during the visit that the doctor said although she has a very sore throat, it is most likely all viral. It was good to know we were not missing anything more serious and it's just a matter of giving them time to get over it. 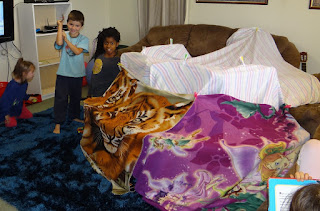 Tuesday 16th: Asher missed Champion Centre this morning and I suggested that Ruth stay home too. By morning tea she was already looking much better, but just used the day to rest. She was clearly feeling better though as she created this huge tent for them to play in this afternoon.
Wednesday 17th: Asher was well enough to go to preschool today and had a great time. 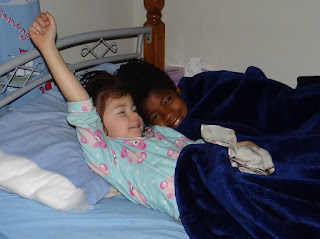 Thursday 18th: With Rachel away this week Ruth has been sleeping on the bottom of Hezekiah's bunk bed. Asher has gotten into the habit of heading to her in the morning. Ruth likes this alarm.
I got a call yesterday afternoon to ask if I could get to the lab in town for my blood test. It would normally be rather hard as Rachel works on Thursday morning. Brendon however had seen the doctor yesterday and started antibiotics this morning. His cough had developed into a chest infection, so he had two days at home to properly rest and recover. His chest was so sore this morning that I was relieved he could get started on the antibiotics today. I think we both just assumed his was also viral and left it a bit long before getting it sorted. 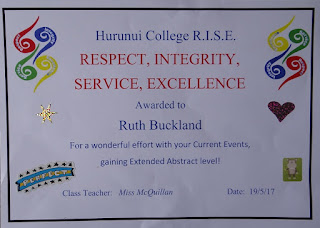 Friday 19th: The primary school alternates between a primary assembly (with parents invited) and then a singing assembly. Today was a singing assembly and Ruth got a certificate for "a wonderful effort with your Current Events, gaining Extended Abstract level!" She worked really hard this week to achieve it (especially having lost out on Monday and Tuesday). Her goal was to get this level as she knew she would be the first in her class to achieve it. Well done Ruth. 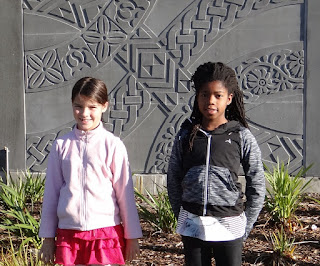 Saturday 20th: Today Ruth and Hannah attended a "Sibling day" in town run by Parent to Parent. The Sampson's brought Rachel to the venue as they got back from camp yesterday. Rachel and I then headed to an audition for Sound of Music. Rachel didn't get a call back, but made a new friend and thoroughly enjoyed the experience. The director who was on stage with them through the audition was so eccentric and so much fun. It sounded like a wonderful experience and so I am glad she got to try out.
Rachel and I then got some shopping done and she got to get some driving time in town. She did really well on the roads, however the parking was a challenge. So we need to get time to practice parking in a quiet environment.
We enjoyed a magnificent sunset on our way home. 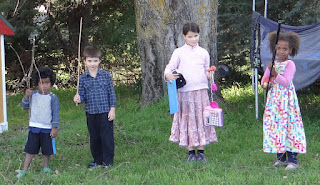 Sunday 21st: New friends joined us at church this morning and then came and had lunch with us afterwards. The children had a great time playing. 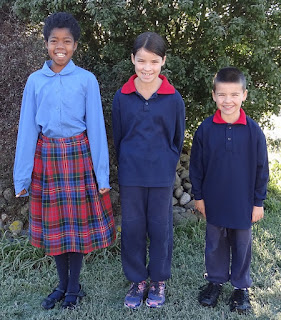 Monday 22nd: School photos today. So I thought it would be a great time to get a family school photo each year. Ruth is in Year 7 now and so they have to wear the "proper" winter uniform for Year 7-10. Year 11-13 change to white shirts with ties. 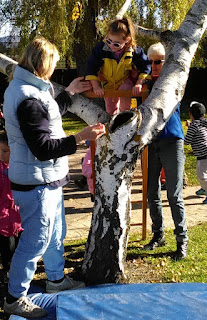 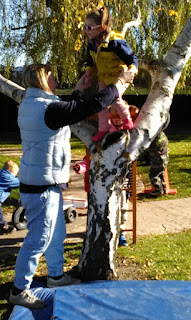 Asher had a great time at preschool today. Normally, when I arrive she spots me (often when the car pulls up), stops what she is doing and runs over. She asks for up, gives me a hug and then heads to get her bag. Today I snuck in and managed to get some photos before she spotted me. She came over for the hug and then went straight back for another turn. She enjoyed this activity so much she then went for another turn and I told her that would be the last one.
For the two turns after the photo I came over and held her other hand. She got a much nicer jump down with hands to either side. Some of the children are able to jump down on their own and others need one hand held. Asher only feels comfortable having both hands held, but so enjoys it and is learning about taking turns and waiting patiently. Such fun and learning. 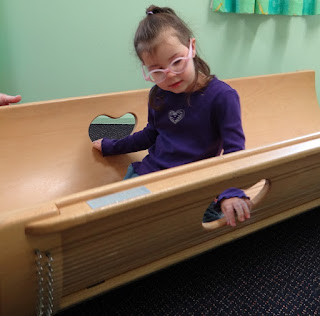 Tue 23rd: Another first today at Champion Centre. Asher sat and played with the cradle's strings. She loves playing on guitars, but obviously never saw it as the same. It was lovely to have her enjoying making some music. It is such a beautiful instrument.
It was cross country this afternoon. I will leave all the photos for the next post.
While I was out with Rachel for St John, Asher had a 1 min Tonic Clonic (6:30pm). It was great that she had a 10 day break.
Posted by Buckland at 10:00 PM