Cross country and the rest of the week 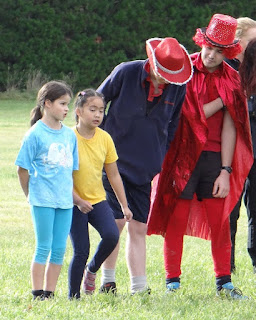 Wed 24th: The children have all been practicing for cross country over the last couple of weeks. Ruth was especially looking forward to it and so was disappointed that she had missed out on extra training last week with being sick.
The school has managed to keep the event both fun (for those who aren't runners) and competitive (for those who are and who want to get good times). Our children are in the blue house - so they chose some blue things to wear and stand out. Some of the older kids really put a lot of effort to dress in their house colours. :-)
Hannah seems to be really good at short races. She is not too pleased with having to run this long one (over 4km). Here she is chatting away to her friend Grace. The social side of the event was much more important to Hannah. :-)

Ruth looking great in her blue tutu. :-) I'm glad she has the courage to do things like this. She was also very motivated to do well today.

And they are off.

The 5 to 7 year olds do a shorter route.
Beth and Hezekiah waiting patiently for their race to start. 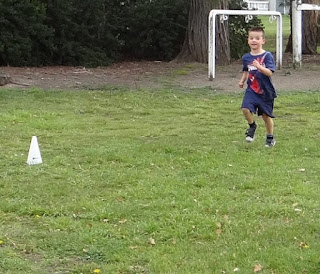 Hezekiah did so very well. I thought I had spotted his spider man shirt coming in the field close to the front. He came in 6th. And as he is only 5 1/2 and it's for up to 7 year olds, I was very proud of him.
I was even more proud when he told me that he didn't stop. He ran the whole way. Every time they had practiced he tried to walk for less of the course. I had encouraged him to do a "Scout's pace" if he got tired. So if he wanted to walk, to only walk for the count of 10 and then try to run for at least the count of 10 again. 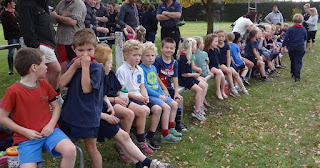 So he was very pleased to tell me that he didn't walk at all. He said he was very close to walking at one point, but just decided to keep going.
Well done Hezekiah.

And then I spotted Ruth coming in. The headmaster was just ahead of her and she did try to catch him. It was just a bit too much of a push though. She managed to run most of this last section though and did amazingly well. 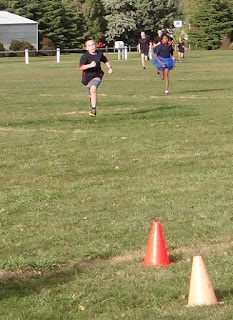 Last year she came in at number 121 and so her goal was to beat that. I did point out to her that some of the older children had now left the school, so perhaps getting closer to 100 would be really good goal. Well, she surprised us all and came in at just 75! A brilliant effort Ruth. Well done.
And no surprise - Hannah was still chatting away to Grace when they came in. She did well though and came in at 133. There were a number of older children coming in after them, so it was a good effort from them. 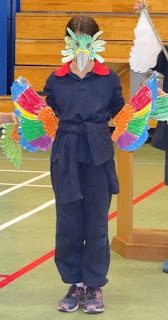 Friday 26th: Primary assembly today and Hannah's class showed their Kea masks and wings. They learnt a lot about Kea on their school camp.
Ruth's class each read a bit about their favourite part of camp. 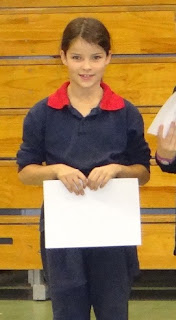 Well done to Hannah for getting a certificate for "outstanding effort and attitude in spelling, reading and maths." She has been doing really well this year. Good job Hannah! 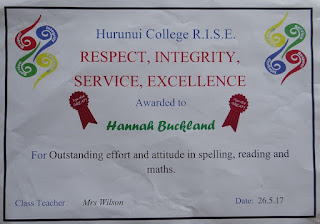 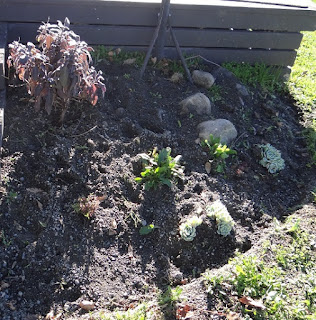 On Friday afternoons (if the weather is good) I am blessed to have a lady come and spend an hour helping in our garden. It's the one area that has really taken strain over the last couple of years with Asher's extra care needs. Brendon often spends the time he would have in the garden, inside helping with Asher so that I can get other things done. So this is a huge blessing to us both. She did some weeding last week and this week came with a whole selection of plants to put in. She transformed this messy area into a lovely little bed. 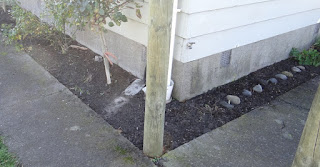 She wanted to plant in this area too. When she got looking she found that a bulb that was there had reproduced itself till there were more than a dozen in the one area. So she thinned them out, planted a whole lot of them (nicely spaced) and even had a few to take home.
Just as the lady arrived today Asher had a 1 1/2 min Tonic Clonic. I'm always so grateful when they stop under 2 minutes. 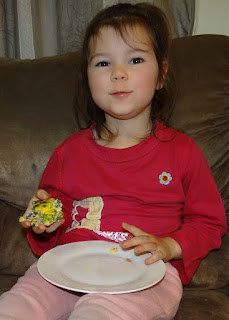 Saturday 27th: I have spent much time this week making quiches. There are 5 different options depending on what people are able to eat, and what they like, as well as medical requirements.
Asher has not been wanting to eat her frankfurters and olives as much since her sore throat, so I thought this would be a great way to get them in. I added broccoli to hers too (which she loves) and she is so pleased with them. Which makes me so happy.
I have made at least a dozen of each (2 dozen of Asher's as they are a snack size - so she will eat 2 - 3 a day). They freeze really well and I just need to remember to take some out the freezer the night before. Thankfully they do all look different - so everyone knows what their own one looks like. There is no way Brendon will mistakenly take the ones with broccoli or olives in. :-) 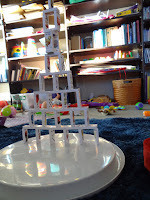 Sunday 28th: Ruth having some fun with the dominoes this afternoon. :-)
Posted by Buckland at 10:00 PM