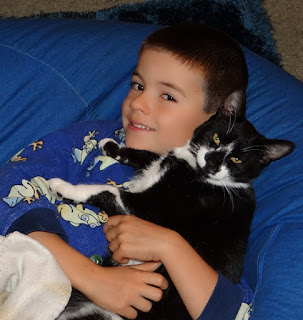 Monday 29th: Hezekiah is most often up quite a while before the rest of us. So he puts a movie on to watch while he waits for all the females to wake up. When Brendon leaves for work he leaves a light on in the lounge so that Hezekiah knows it's morning and he is allowed to get up.
Anakin gets up with him and often enjoys this time to cuddle.
At 4pm Asher had a 1 1/2 min Tonic Clonic. That brings the total for May to just 7!!! This is excellent. She averaged 8 a month when she was on 2 AEDs and she is only on 1 now. When she stopped the AED they went up to 18 a month. So we are really pleased with this improvement. We are praying that the diet will continue to make even more improvements. 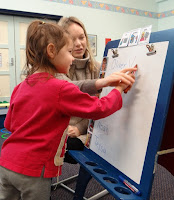 Tuesday 30th: Asher has also made wonderful improvement at Champion Centre this year. Here she is during "roll" ticking off her name. At the start of the year this whole "group time" at the start of the day saw Asher screaming and hitting me. So it is wonderful to see how far we have come. 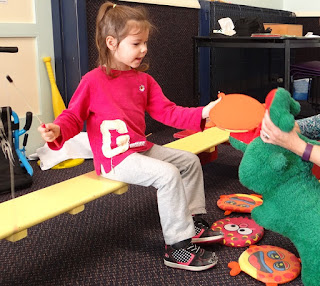 Her OT has also been really impressed with her improvement in allowing change. In the past she would "feed" the crocodile the frogs that she loves playing with. Today the frogs had disappeared and there were fish instead. She had to "catch" the fish first, and then feed them to croc. It is so sweet hearing her say "yum yum yum" every time she gives croc some food.
She had a great time during her music session too. I didn't get a photo of her at the keyboard but I was amazed as she normally only lasts for 20 to 30 seconds. Today she spent a few minutes there, playing away and enjoying it so much. 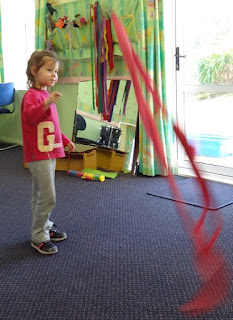 After Champion Centre we headed to the hospital for a follow up EEG. Asher started playing with one of her boxes of puzzles while we waited. She was half way when we were called in and moving the box into the room was a great help. She didn't even look around at the room and just carried on with her puzzles. It got harder from here though. They have to put a tight cap on which is attached tightly to a strap around her chest (so it all stays in place). They then have to get each contact connected to the scalp and they do this by scratching the scalp a bit (with some lubricant). Asher tolerated with it for a while, but eventually didn't even want to finish the last puzzle. They got all the connections done but by that time she was totally stressed. So they discounted the cap and we were able to get out the room to walk around. Unfortunately she was beyond a walk getting her back. She was just screaming and hitting and so totally stressed out.
Through the visit we had a Autism representative present, Helen. I thought she was there to meet me, but it was actually to be a support for me. She was so encouraging and often said things like "you don't even need me - you have this all under control".
During this time of not being ale to get Asher to calm down, she told me that there was no rush, that we had plenty of time, and that I was doing a great job. The encouragement was much appreciated. I then thought of using the lift to calm Asher, as she does always love the lift rides. And it worked. The crying finally stopped.
As soon as we got out the lift though, she started getting stressed again, so I asked Helen to fetch her mini iPad from the room. We had tried before to entice her, but she wanted nothing to do with anything she was so past it all. In the lift though, with her calm, I was able to entice her with an Old MacDonald song app. She loves touching the different animals and getting their reactions. So we were able to leave the lift without crying. With the promise of "room then lift" we got back into the room for the test. 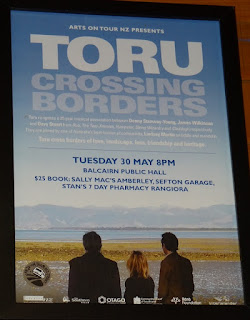 She played with the mini for a while but as soon as her interest decreased, Helen started blowing bubbles for her. A bit hit with Asher. And that saw us through the rest of the test. I asked them to do the photosensitivity part of the test again as she was photosensitive at the last one. I think it may even be worse now though because she had two clear jerks while the lights were flashing.
So although a really hard thing to go through, we managed in the end. I'm especially thankful that they had booked her for a much longer session (it was more than twice as long as the previous ones with the stress factor).
Rachel's ballet teacher had asked if we wanted to attend a show at their hall this evening. We bought tickets last week and I was so glad we had this special ending to a rather stressful day. The music was so enjoyable and it was exactly what I needed. Just to relax and enjoy the beauty of music and people's creativity and talent.
As a bonus, the one musician was an older Scottish man. Even though he has been in NZ for most of his life, he still has a very Scottish accent. So not only did he look like my Dad (with is grey hair and beard) but he sounded like my Mom's parents (my mother only moved to South Africa from Scottland when she was 7). So it was extra special for me to be thinking of them both. 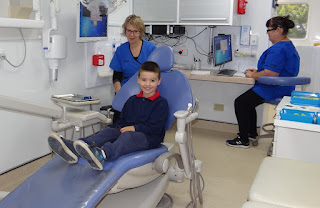 Wed 31st: Dental nurse for the 3 school children this morning. I took a few extra photos of Hezekiah today so that we can make a social story for Asher (for next year).
I am so thankful for how well it went today. I was not asked once about doing any fluoride treatments and x-rays where only a quick passing discussion. I had refused them last year, so thought I would be pushed to do them this year. There was no real indication of their necessity though. What a relief. 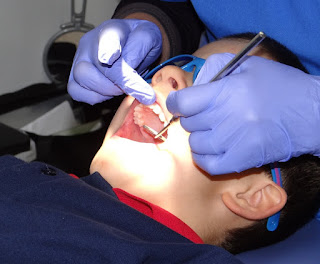 It was so good to just be respected for my opinion. She told Hezekiah "I can see your mother feeds you good healthy food" and then she asked him if I still made our toothpaste. He said yes to which she replied "aren't you lucky".
Ruth has old holes in some molars. There does not seem to be major change since last year. On the other side of the mouth (with worse holdes) the teeth have fallen out. So I was pleased I refused fillings for them last year (and they didn't cause any pain before the teeth did fall out). So it worked out really well.
Hannah had a filling fall out almost a year ago. She doesn't have any pain in the area, but it is a pain to clean (as it takes so much more effort). So she offered to just "fill it up". It was no performance at all - just cleaning it out and re-filling the spot. No injection, no hassle and over so quickly. So all in all it went so very well. 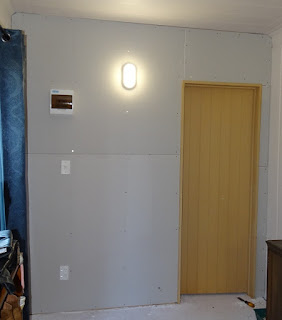 Asher had her appointment on Thursday morning. That didn't go very well, but there was not much expectation. The ladies were really great, singing with her to relax her and eventually quickly just having a look and counting the teeth. She is also happy that they all look fine.
I have learnt from how well Asher did entering the EEG room on Tuesday, that she needs to be busy with something. I should have had her little box of 4 books. She always reads them ALL, so if she had started them outside while we waited, she would have wanted to carry on once inside, which would of help distract her from this "strange new place". As soon as we walked in she had started screaming. So hopefully I have learnt for next year. :-)
Wednesday also saw the internal container walls being finished up alone with the electricity. What a wonderful blessing this father and son have been to us in getting this all set up. We are overwhelmed with appreciation and gratitude.

On Wednesday evening I travelled with a friend in to town for a Parent to Parent Coffee and Craft night. I had a great time making this banner and an even better time chatting with the other mothers. It is always so very encouraging and so helpful to talk with people who understand in a deeper way what we are going through. 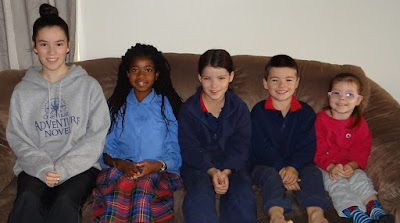 On Thursday 1st June Asher had a 2 minute Tonic Clonic at around 5:30 while I was out with the girls at dancing. I always start worrying when it goes over 1 1/2 minutes that it may end up a really long one, so I'm glad I didn't have to be there for it, and I am also very thankful it did stop when it did.
Friday 2nd: Got the monthly children's photo this morning before the school ones headed off.

We had expected to wait 2 weeks to get the blood results from the extra chromosome test that I had done. Wonderfully I got the results this morning already (just a day after 1 week!) and we are no a LOW risk! Thank you Lord.
They can't say with 100% accuracy that the baby will not have Down Syndrome, but it is very unlikely. We are so very grateful.
An added bonus from this extra test (being focused on chromosomes) is that we could get confirmation of baby's gender (which I did want to know).
It's a girl!
Although we all would have loved for Hezekiah to have a brother, I do think that a little sister for Asher will be a huge blessing to her. God does have a very good plan in this all. 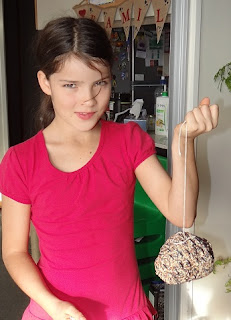 And just to clarify about the Down Syndrome testing. I have nothing against people who have Down Syndrome. Asher has had some Down Syndrome children in her groups at Champion Centre and they are lovely children. They do have challenges though and there can be a lot of extra work for the family in helping them overcome those challenges. So for us it was more about getting mentally prepared for that extra work if there was a strong possibility. I am glad we did the testing as Ruth specifically said she is so glad. She says she has forgotten what it is like to have a "normal" baby. Ruth loves Asher dearly and is the sibling that spends the most effort teaching Asher new things. I think this does however make Ruth very aware of the extra effort that it takes.

Hannah made this bird feeder at school this week. As our cats catch birds, she is going to give it to a friend to hand up. :-)
Posted by Buckland at 10:00 PM