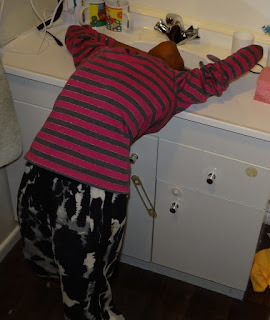 Sunday 16th: I did 11 braids of Ruth's hair today. Our goal is 5 per week, so that was great. We had a nice relaxing afternoon watching movies together while I worked on them. Normally I just rinse off each bit before re-braiding them, but as there were so many I suggested she just shower. She decided to just rinse off anyway. It helps being so flexible as she just dumped her hair back in the sink.
With the week that lay ahead, I was especially glad we had such a relaxing Sunday afternoon.
At 7pm on Sunday evening, Asher had a 1 minute Tonic Clonic, so she went to bed early.
Unfortunately just before midnight she had another 1 min TC. That made me wonder if something was brewing. She hasn't had a night seizure for a long time now, and they often go with illness (and a cluster of seizures). At 12:45am, she had another 1 min TC. So then we knew something was up. Thankfully she slept well the rest of the night. 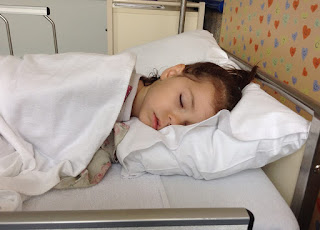 Monday 17th: At 9:45am she had the 4th 1 min TC and then just 15 minutes later she had a 8 1/2 min Vacant. Only now did her temperature go up.
I called her dietician to find out what we needed to do about food as she wasn't eating. She suggested I find out if there was someone local to put a Nasal Gastric Tube in for her. As it was a public holiday, I ended up at the Health Line and after giving her the details of what had happened, she said the advice she is getting is that she needs to call an ambulance. So that happened and we headed off to hospital.
We arrived around lunch time and not long afterwards, she got sick. So it looks like she has gotten the tummy bug Hezekiah had last week.
I tried to get more food (keto shake) in with a syringe through the afternoon. Every time the doc came in Asher would perk up and so she said she wasn't sick enough to get a NG tube in (we both suspected she would just pull it out). At 5pm she got sick again, so I just stopped giving the food and she got sick again at 6pm. As she hadn't had any more seizures through the afternoon, the doc was happy for us to head home. 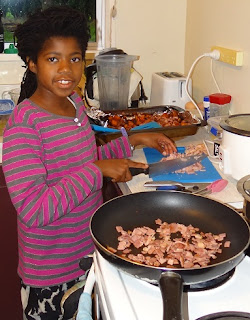 Thankfully the nurses saw her struggling so much at 6 with the gagging that they suggested getting something to help with the nausea. That seemed to help settle things and we were able to get her home and into bed without any more issues.
Unfortunately she didn't have a good night though and I had wished I had asked for an extra dose or two of the meds they gave her earlier. She spent at least 2 hours in the night vomiting every 10 minutes or so. Eventually there was just nothing left in her stomach and she was just gaging. It was horrible. We were so relieved when she finally got back to sleep.
Tuesday 18th: Brendon thankfully took the day off today after the hard night we had had. This allowed Asher and I to have some much needed sleep through the day.
Ruth was a star and prepared food. She made some chips which were so good they got eaten before a photo could be taken. Then she did a nice big vegetable bake with bacon. 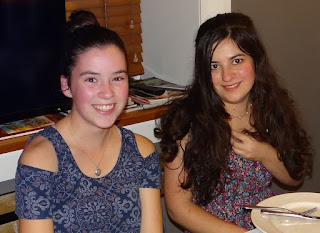 Thursday 20th: Rachel, Ruth, Hannah and I attended a Sedar meal that our church put on this evening. We had a baby sitter lined up, but as Asher got sick again early this morning, we had to cancel that and Brendon said he would stay home with the younger two.
Rachel was so pleased to get to meet up with Aviel again. Her father ran the Sedar and we were so pleased when we heard that she would be up with him. The last time the girls saw each other was at Aviel's Bat Mitzvah 3 years ago.
Rachel only just arrived back from Clinical Training. So she has had a week away and ended with an evening out. I suspect she will need the weekend to catch up. 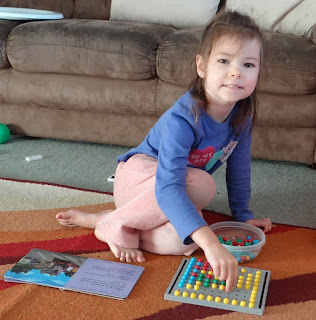 Friday 21st: Asher looking much better today. She hasn't played with this peg board in a while. It was again very cute to watch her playing with it and alternating with "reading" the book.
Unfortunately I went downhill today and ended up with the tummy bug too. Brendon started feeling ill this evening too. Thankfully he was feeling better by the morning. I had a really bad night though. So Saturday and Sunday were just quiet days at home. 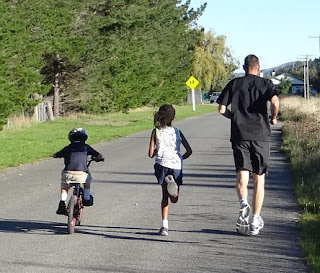 Sunday 23rd: Ruth knows that the cross country will be coming up soon, so she asked Brendon if they could try to get out running regularly. So they made a start this afternoon.
Hezekiah headed out to join them on his bike.


Below: What a beautiful view as they run around the block. (Can you spot them - bottom left corner.)

Hezekiah stayed with them until he was on the home straight - then he headed off at his own speed. 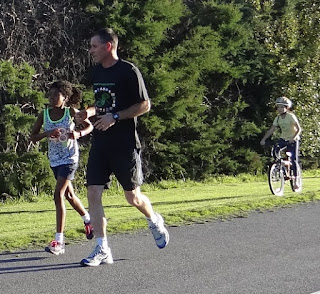 Hannah was in the shower when they left, so she left a bit late and just joined them for the last bit.
Unfortunately Ruth's inflammation has flared up a bit as her knees were a bit sore after the run. She has been eating more potato lately - which she knows aggravates it. So she has decided to cut back for a while.
Posted by Buckland at 10:00 PM