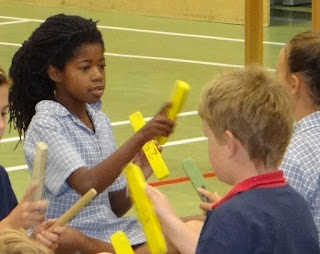 Ruth's class and the one below her presented "Hei tama tu tama" with Rakau sticks. 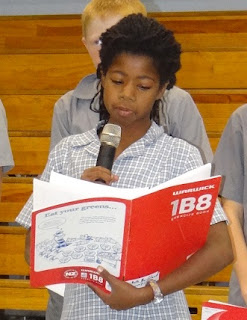 Ruth's class also presented some of their writing. Ruth introduced the postcards that they wrote and was one of the children who read theirs out. All so very creative. 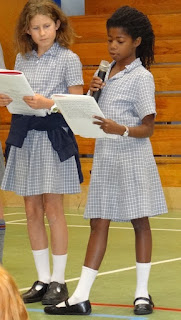 Then they each chose a favourite verse from their "That was summer" poems and shared those too. 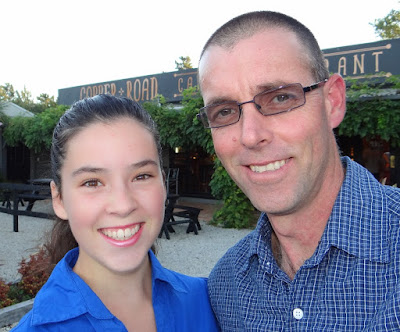 Part 2 of the 16th Birthday celebrations was: Dinner with Dad. Rachel drove them to dinner too. 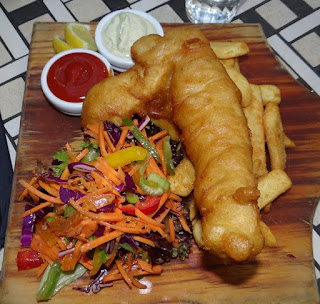 I had to smile when I heard that Rachel had fish and chips. Such a fancy restaurant - but she said it was really fancy fish and chips. :-) The main thing is that she enjoyed it - which she did. 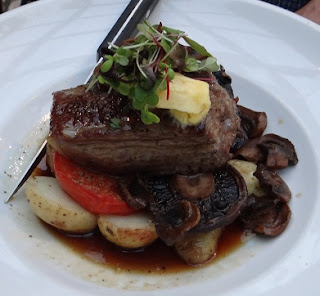 Brendon enjoyed a steak. Just a bit small but thankfully Rachel didn't eat her salad or all her chips, so that helped fill him up. :-) 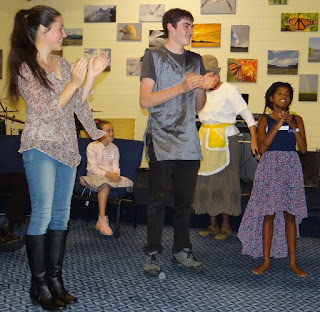 Saturday 8th: After lunch the older 3 girls and I headed off to David's 21st birthday (Daniel's eldest brother). It was a wonderful afternoon of celebrations with loads of fun games and even a bit of dancing. Nan led some Jewish dancing and then they did the chicken dance. I just couldn't manage to get them with "wings" out. :-)

Monday 10th: Final full school assembly for the term today. It was nice to be there as the children are always so pleased to see me there. Even if there were no specific photos to be taken. There were not that many parents there, so Hezekiah especially, was thrilled that I was there. I'm again so thankful to be able to leave Asher with Rachel so that I can do this for the others. 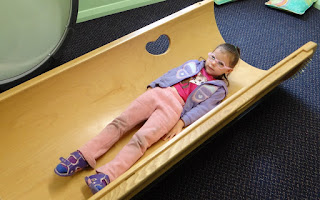 Tuesday 11th: Lynda (her EIE at preschool) attends a session at the Champion Centre with us each term. So she was with today. It was a little confusing for Asher during music to have Lynda and Linda. :-) She had fun in the music cradle. Mostly walking through it though - I was just to busy having fun with her to take a photo. On the whole she had a really good day today and is really settling into this new group. 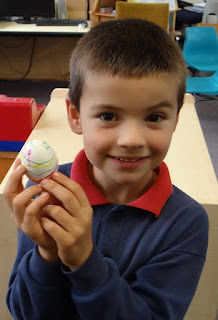 Last week I attended the girls "Student Led Conferences" and today it was Hezekiah's turn. So after school he got to spend a bit of time with me in his class room. The teacher gave some info to all the parents on what they have been doing, and then the children have time to show their parents their work. Even though he is just 5 1/2, he has been at school for 6 months, and so got his first "report". It was good to talk through this with one of his teachers (it ended up being the one who did the assessment with him).
He is doing so very well with his reading and is so diligent with getting his "home work" done when he gets home. He has a reader from school and then he works on his Reading Eggs and Math Seeds. I never even have to ask him to do it, he is so self motivated. I hope it lasts as it is helping him so much. 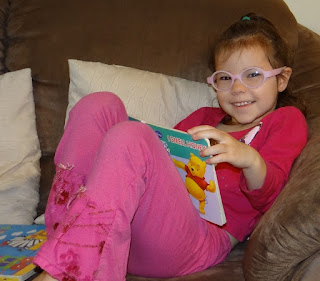 Wednesday 12th: At midday Asher had a 1 minute seimi-conscious episode. She came over to me and was clearly just not feeling right. Not a full blown seizure, but something happening neurologically. What a blessing that this was the first event of this month.

Thursday 13th: Asher enjoying a book this morning. Unfortunately at 5:30pm she had a 1 1/2 minute Tonic seizure.

Rachel and I headed off this afternoon to get her to her lift to Easter Camp. This is the leadership camp they have each year. She went two years ago for her Corporal training, and this year she is going for her Sargent training. 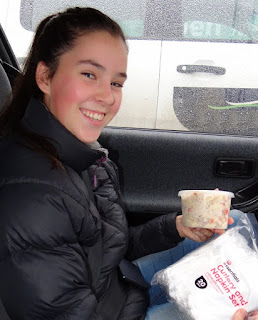 She had planned to buy some dinner at either the Sushi shop (which closed at 5, so we missed them) or Countdown.
She got a lovely looking chicken pasta salad at Countdown, but we realized that we had forgotten to bring a fork. So for $5 she bought a whole 20 pack of cutlery sets. We have a few of these in each car now, so we won't get caught again. :-) We had a good laugh about it - so I thought it would be a fun picture. And a nice record of her heading off. She will be away for a whole week as this camp finishes on Monday afternoon and then she needs to be back at the Waddington camp site really early on Wednesday morning. She is attending Clinic Training on Wednesday and Thursday and has been looking forward to getting this training done for ages. So it's great to get both done. Thankfully she will be staying at friends who stay close for Monday and Tuesday evening. So that saves her the long trip home and back between the two camps. 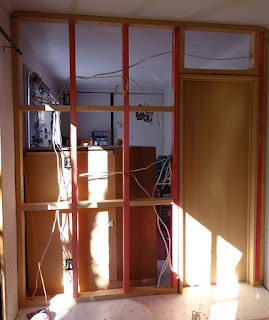 Friday 14th: A couple of weeks back a friend came over and did the framing for Ruth's wall, including installing a door. Today he came back with his electrician son to get the wiring into the walls. 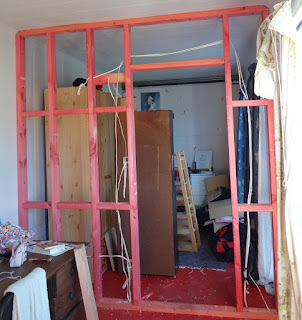 So Rachel's wall is also framed up now, and the wiring is set up for the next step of finishing the walls. 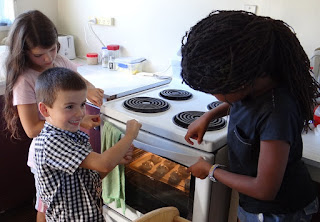 Saturday 15th: We made resurrection cookies again this year. The photo is of them putting their tape on the oven.
It's been a long time since we did them last. I was a bit unsure about turning the oven off straight away, and my instinct was right. They didn't cook well enough at the start, so they were not hollow as desired. They were also still a bit sticky in the morning, so I quickly cooked them for a bit more and they could at least be enjoyed at church - even if the illustration of the hollow tomb was lost. There was enough learnt and enjoyed through the experience. Hopefully next year we will get it right.
Posted by Buckland at 10:00 PM