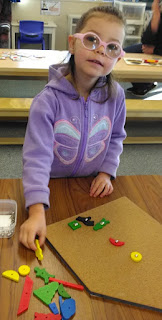 Monday 24th: As Lynda was away for a week during the term, she offered to do a week in the holidays instead. Asher was too ill last week, but was able to attend this week. She had a lovely time. I think she had cabin fever from being at home for a solid week. And it was a great help to me, especially after the hard week last week.
Asher had her "normal" morning snack for the first time in a week, and unfortunately got sick after lunch. A similar thing happened last week on Wednesday night. We gave her just 2 teaspoons of her "normal" evening snack, and she got sick in the middle of the night. At the time I wondered if it was perhaps the fresh cream in the snack, but we cancelled the baby sitter for Thursday evening, just in case it was still the tummy bug. She has been absolutely fine since then (and not had any fresh cream). So this was clear for me that it was a reaction to the fresh cream. (Almost exaclty the same amount of time after the fresh cream to being sick.) This is a huge blow for her diet as it was a major source of fat in every meal and snack.
She has now lost almost 1kg in the last week and hasn't got her normal appetite back. It's a real juggle to try and tempt her to eat (anything) but then also try and keep the fat to protein & carb ration right. I have given up trying to limit her protein and just focus on the total of protein and carbs. At this stage protein is more palatable for her - so we go with that. 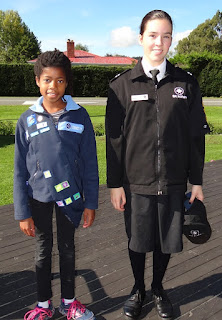 I have been praying much for wisdom to know what to do with her food. She is not enjoying things as she used to. So I need to be creative and find ways to make it work. I praise God each day that goes without seizures though. Thankfully the diet challenges have not been resulting in her ketones dropping (if anything they get too high when she doesn't eat enough). So at this point it looks like the higher ketones are indeed helping with seizure control.
Tuesday 25th: ANZAC day today and Brendon is working again. The service was in Waikari this year, but Lynda graciously gave the girls a lift to the service. Rachel even got to lay the wreath on behalf of the St John attendees.
Last night Ruth and I made some ANZAC biscuits as a part of her guiding badge. I just used my "Crunchie" recipe from over 20 years ago, as it's almost identical. It was the first time I had made the recipe into biscuits though, and that worked really nicely. Normally I would just push the mixture into a pan and then cut it into squares after baking. I think biscuits are the way to go though - and a perfect ANZAC fit (wheat free as I used rice flour rather than wheat flour - and not officially GF because of the oats). 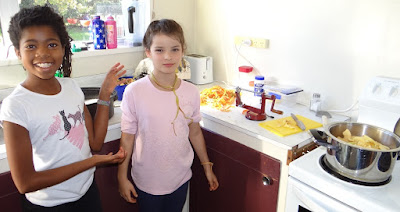 This afternoon Ruth made some apple sauce and had fun using the apple peeler and slicer. Hannah and Hezekiah had some fun with her too. She "peeled and sliced" a carrot for them each too. They loved having the twirly apple and carrot to eat and then Ruth even created some jewellery with the apple skins. :-) 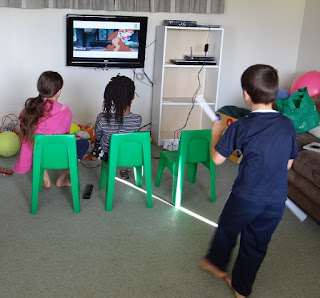 Wednesday 26th: Asher was at preschool again this morning and so the others made the most of using the TV and did some Sing Star. At this point Hezekiah was just dancing behind them. They had so much fun. Thanks for suggesting it Ruth. 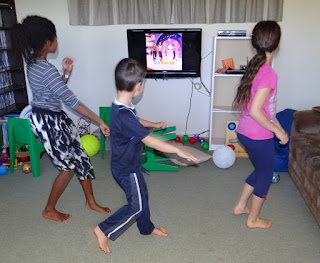 This afternoon while Asher was enjoying some time on the bed with me, Ruth had another great suggestion and got my Zumba DVDs out and got them all doing some exercise. So much fun. 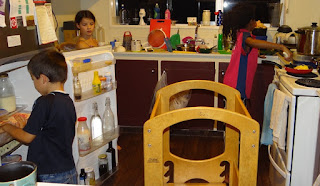 Thursday 27th: Asher had the best day by far today, without her ketones spiking. I made sure I fed her regularly (almost 2 hourly) and was sensitive to if she was even slightly "grizzly" and after a bit of food she was happy again. She is still not enjoying her food as before the illness, but it was a good improvement today. 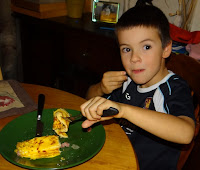 Ruth made herself an omelette this evening and decided to give Hannah and Hezekiah a taste. So they then asked for their own. :-) 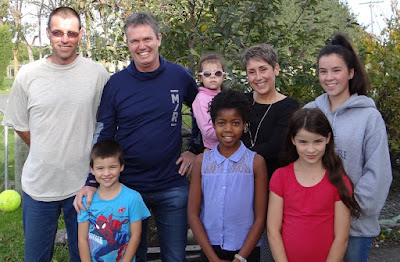 Friday 28th: It was wonderful to have Brian and Tanya join us for lunch today. They are having a South Island holiday, so we were thrilled they put us on their agenda as they made their way up the island. We saw them last in 2010 on our North Island trip. Brendon took the afternoon off, so we had a lovely time visiting and catching up. 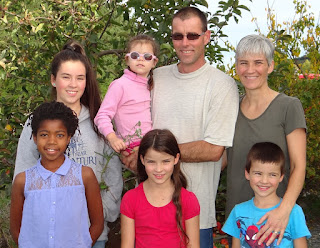 It was a good opportunity to get a new family photo too. :-)
Unfortunately Asher had a seizure at midday. A 7 minute Tonic Clonic. Thankfully she had already asked for food not long after 11, so didn't go to sleep with an empty stomach. She was rather unsettled after the seizure but thankfully did have a good sleep in her bed while we had lunch.
I wasn't too surprised to see a seizure today. Her ketone levels have been nice and high since her tummy bug, only twice dropping just under 4 in the mornings. She has been eating a lot better since Wednesday though, and this morning her ketone level was only 2.4 - so rather low. A good indication to me that the higher ketone levels do seem to be helping with seizure control.
Posted by Buckland at 10:00 PM