Monday 27th: Hezekiah wanted to go to Karate today, so I walked up with him at 6. The yellow belts start at 5:30 and the rest at 6. Ruth has decided to not continue with karate, so she rode her bike with Hezekiah while I pushed Asher. 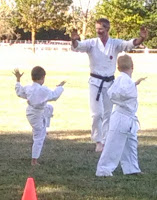 I stayed to take a couple of photos (just on my phone - so I apologise for the poor quality). He had so much fun he wanted to go again on Wednesday. He had a fall on his bike on the way up though. 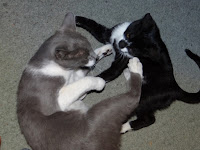 At first he said he just wants to go home, but I encouraged him and he was so brave and stayed. Well done Hezekiah.

Ruth took this photo of the cats playing. 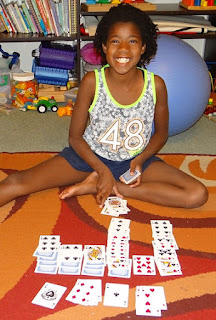 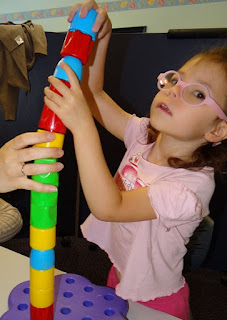 Tuesday 28th: Asher having fun at Champion Centre. She was really concentrating on her tower that was getting rather tall. She noticed me with the camera though, and it was so cute to see her looking at me, but keeping so still so that the tower would not fall.
Unfortunately in the last session (before group music) she had a seizure while on the play equipment outside. I noticed as soon as it started as I saw the way her arms were moving up, so I ran up the stairs quickly and got to her before the other ladies around even realised what was going on. 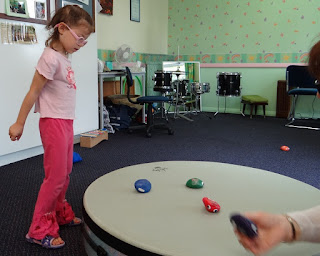 Thankfully it was just a 1 minute Tonic Clonic and she had a good sleep afterwards. I sat with her on my lap through group music.

Note: The next week she sat quietly for the first time with the 2 new songs during group music. Normally she just wants to get up and run away. I wonder if perhaps this time of sleeping and having the music going, allowed her to hear them subconsciously, without any stress, and therefore helped her to accept them. They don't seem as "new" to her anymore. 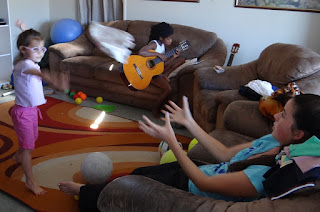 Playing with Rachel this afternoon.
Ruth was home this afternoon as she had gotten sick at school this morning. Brendon brought her home and thankfully she didn't get sick again. Protocol though is that she stay home for another day, so will spend Wednesday at home to make sure she is over it. 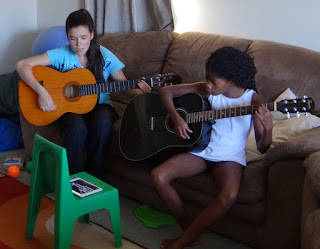 It was nice listenieng to them singing and playing together this afternoon.
Wednesday 1 March: Unfortunately Asher had 2 seizures at preschool this morning. A little after 9am she went to Lynda for a cuddle and when Lynda checked her eyes, she saw they were up. The vacant seizure only lasted for about a minute and a half and then she "woke up" and just wanted to go outside. She was really wobbly on her feet though and so Lynda gave me a call. I quickly got there and as I arrived Asher had a 1 1/2 minute Tonic seizure. It was again really strange as she didn't want to sleep when it stopped, but trying to walk wasn't wonderfully successful as she was rather wobbly. 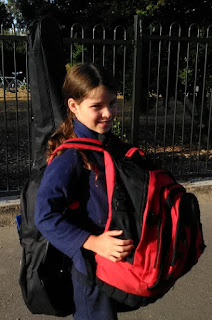 Once realising I was there, she just wanted to go home. Thankfully, by the time we got home she was 100% again. She had a nice quiet morning at home.
LEFT: I finally got the girls some bags for their guitars. So Hannah took hers in it's cover for the first time today. 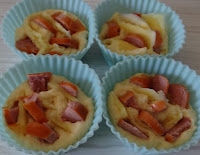 RIGHT: I have been trying to work out a muffin recipe for Asher so that she can have an easy "all in one" meal that I can have already prepared and in the freezer or fridge. These ones worked ok. I'm not quite there yet. Interestingly, my biggest struggle is not getting the carbs down, but getting them up, and keeping the protein down. Thankfully a fellow keto mum gave me a great idea - using "normal flour". So by using some Gluten Free flour I have, I was able to get more of a natural "muffin" texture. Still needing to perfect it though.

After the Port Hills fires just weeks ago, we had another massive fire on the other side of us this time - up at Hanmer Springs. Just look at all that smoke (this is taken from our deck). Although we have gotten a bit more rain over the last few months, the drought still continues in our area and things are just so terribly dry. The fires are spreading so quickly. 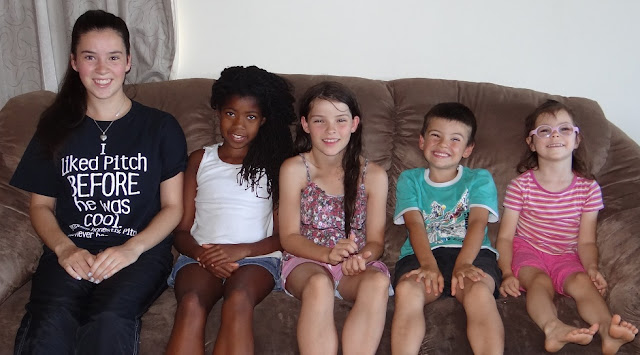 Our March photo. :-)
With Ruth being at home today, I managed to do some work on her hair. We had been chatting about it as she was saying that is is getting just too heavy. It's been 6 years of doing these "braid locks", so it's 6 years of hair trapped in there too. When we brush our hair every day, we loose hair. The hair that is falling out for Ruth, is just trapped in the braid. So we discussed trying to "undo" each braid and then re-braid it. She was very excited about this plan, and we got 2 braids done today. She is holding up the three phases: Old braid in the middle, un-done on the right, and then a new braid on the left. You can see how much less hair there is.
Ruth has 260 braids on her head, so we are very aware of how very long this is going to take. Ruth is hoping that it will be done by Christmas, while I am hoping we can get it done within a year. If we get 5 done a week, we will make it in a year. I don't think one every day is practical as the weeks are so busy already. Ruth has already chosen to stop Karate and St John as she is just too busy. I think weekends will be our main time for doing hair. So we will try to keep up with at least 5 each weekend, and we will see how we go. 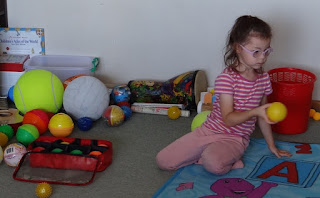 And for those wondering, no - we can't just leave the hair and not braid it. The curls are so tight that if it's left for just one day it will just knot up into itself and it is very painful to untangle.
She is so blessed to have her own hair this long, so we will put the effort in to keep it. :-)
Thursday 2nd March: Asher is just loving playing with her balls again. She has over 30 that she throws across the room (excluding the 30 odd table tennis balls). We made sure we had a nice range of sizes and textures for her. She does keep the carpet bowls (in the red bag) separate though, and they get rolled to a different section of the room. 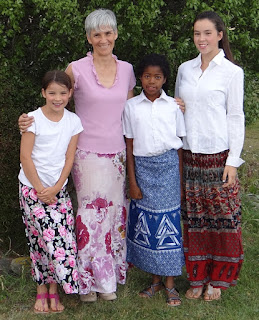 If you ever come for a visit, be prepared to have Asher give you a cuddle and then tell you to "sit down" so that she can throw balls to you. :-) 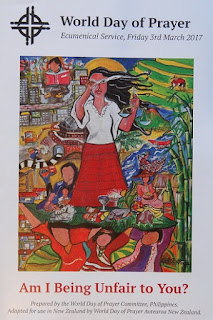 Friday 3rd March: Lynda had invited us to join her at the World Day of Prayer this evening. Rachel, Ruth and I had parts in the service. Hannah decided to join us and was so glad she did as two of her best friends where there too.
We had a good evening learning about some of the struggles for people in the Philippines. We then enjoyed a nice time of chatting to different people after the service. 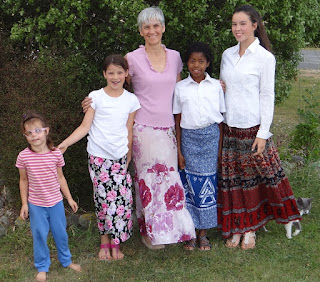 I asked Brendon to take a photo before we left, and when Asher heard that, she hopped on the lounge chair (for their monthly children's photo). It was so cute. She quickly realised it was something else though, and so came down and joined us standing for our photo.
I often think about the happiness she brings to our family. She was very well named. :-)
Posted by Buckland at 10:00 PM

Ruth's hair is so long!!! I'm really excited to hear that you can undo and rebraid. Learning new things all the time. Thanks for sharing your experiences!