Boat, balls, assembly and an app 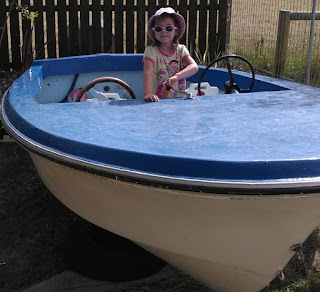 Photos I forgot to put on the previous blog post - from my phone. This one from Mon 6 March. Normally Asher is aware of the time getting close to home time, and so she hangs around at the gate. Today she wasn't close, so I managed to get in without her seeing me. She had just climbed in the boat when she saw me - and wanted to get out straight away. I convinced her to stay for a photo first. And then it was clearly home time. :-)

Tuesday 7 March: Sitting outside the library (using their free wifi) while Rachel was at St John, I spotted this house drive past. :-) 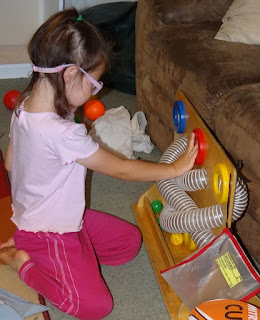 Wed 8 March: I went past the special needs library yesterday and got Asher a couple more puzzles as well as this ball toy. I have finally picked a toy that she enjoys playing with. :-) 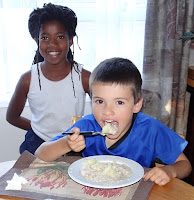 Brendon and Rachel were off at karate this evening and Hezekiah decided he wanted some oats. So his big sister Ruth made him some. Oats are being eaten again by some in the house (Rachel, Ruth and Hezekiah - who are not as sensitive to gluten). They don't generally have it for breakfast though - so it wasn't too strange. :-) We normally have the main meal prepared at lunch time (which the school kids eat when they get home) so "dinner" is often a smaller meal (like a sandwich or oats). 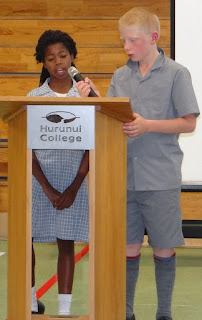 Thursday 9th: While I had the girls at dancing this afternoon, Asher had a 1 1/2 minute Tonic Clonic (at 5:45). This was the first one that has happened after midday, since starting the diet. 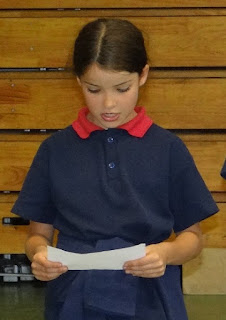 Friday 10 March: Ruth and Caleb were the Assembly Leaders today. Well done to them both.
Hannah was pleased to be reading something for her class about the art they have been doing (below on the left). Then they all had a turn reading about the story that they had read (below on the right). 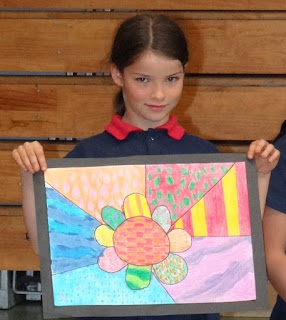 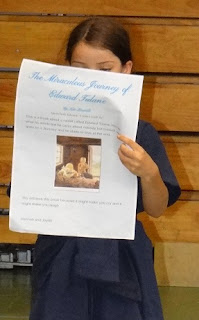 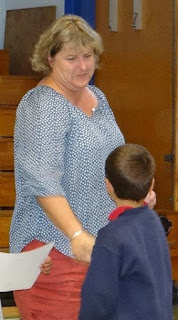 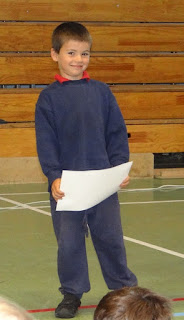 Hezekiah got his first RISE certificate today. He pointed out to me later that it wasn't his first certificate, because he got a welcome pencil when he joined school. 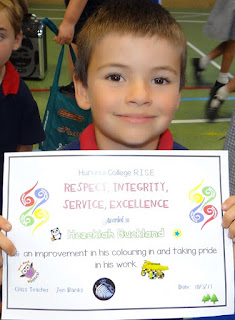 Well done Hezekiah. We are very proud of you.

He really has improved so much with his colouring in. For a boy who is not at all interested in this, he is putting in so much effort. I was amazed at the detail he put into that top butterfly, and he clearly spend much more time that he would have liked on the rest too. :-) I'm so proud of you Hezekiah. Well done.

Hezekiah brought a book home from the library and asked Rachel to read it to him. So she sat reading while Hannah and he ate. He kept asking her to read another chapter. He wanted her to keep reading until the monster came into the story. That ended up being the 2nd last chapter - so they just read the whole book in one go. :-)

Yesterday afternoon we were looking for Hezekiah and he called from outside, saying he was "working". Brendon had loaded a wheelbarrow of wood for us (it's been cold) and so when he saw it, he decided it was his job to pack the wood into the wood box. So kind. So to encourage him, Brendon thanked him for doing that job, and asked if he would help him with another job.
So this afternoon he helped Dad put the cover over the wood. We have gotten a bit of rain, so need to keep it dry. Hezekiah was so pleased to be able to help, and it encourages him to keep up his helpful attitude. 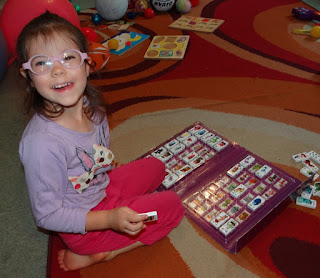 Saturday 11th: Ladies lunch with the church for me again today. It was nice to get time to chat and get to know them a bit more. It was a very wet day, so no other outings happened. Rachel and Ruth did spend a bit of time in the garage painting though. No finished products to photograph though.
Sunday 12th: Another wet day today. We watched a movie together and I worked on Ruth's hair some more. We got 6 braids re-done this weekend.
I took this photo of Asher this evening. It was so fun to watch her put all these dominoes back in their places. The whole thing was upside down, but she has them memorized and was putting them back so quickly.
Monday 13th: My computer crashed over the weekend. I had some warning though, so at least made a current backup onto my external hard drive. This morning I took the computer to a computer shop to ask them to transfer my info onto an All-In-One that is not used as much now that the younger girls are in school. I was a bit emotional when I realized he was only going to copy the photos and documents. And oh - if I gave him info on pregames, he would copy that data over too. And then I would have to load all my programs again. I was upset when I realized he couldn't just "transfer" it all over, but didn't know what to do. 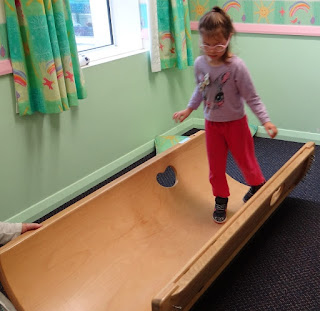 That afternoon I was trying to update Asher's records document, but was having such a hard time as the other computers don't have Microsoft office. So I decided to just transfer the photos and documents myself (I had copied those files separately onto the external), so picked it up on the way home from Champion Center. At least now my Microsoft office is loaded as well as Asher's food calculator. I don't have all my data, so it's not ideal, but it's working.
Tuesday 14th: Fun at Champion Center this morning. Linda held the cradle steady for her first few times across, and then let her go without support. It rocks quite a bit, so it was really fun for her to keep her balance.
Wed 15th: At 1:20pm Asher had a 1 minute Tonic Clonic. She went so blue, I have never seen it like that before. Her face was this terrible mix of colours and her hands were even blue. So I was exteremly relieved when it stopped so quickly. 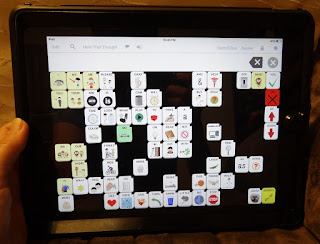 Thursday 16th: This morning Lynda came over and we both got a quick introduction to an app that Asher is going to be able to trial for the next 2 weeks (the iPad and app are on load to us). We applied for the assessment over a year ago (recommended through the Champion Center) and so it's exciting to see how it goes.
Long story shorter: the app will hopefully help her to communicate without the barrier of her speech delay. We give feedback after the 2 weeks. I think I will ask for another trial with the app on a mini. And if we feel she would benefit from it, then we start the process of applying for funding for it (as the app is excessively expensive).
Again at 1:20pm today, she had a 1 minute Tonic Clonic. It started with shouting and she went blue again, but not as bad as Wed. I got a bit of a fright though, because at 1 minute she took a deep breath and I relaxed, thinking it was over. And then the shaking started again. I was incredibly thankful when it stopped just seconds later. What an emotional roller-coaster ride though.
Posted by Buckland at 10:00 PM