Sunday 19th: Daniel and Rachel had discussed him coming for another Sunday visit. So I had suggested he rather just come on a Saturday and then stay over. Hezekiah has a bunk bed, so there is room for him. So he arrived yesterday morning, enjoyed the day at the show, and they got to have the Sunday visit too.
After church Brendon got meat cooking on the BBQ while Daniel got the kids bikes set up with noise makers on their wheels. Hezekiah was so excited about having his bike sound like a motor bike. :-) Ruth even had one put on hers (although she took it off before school on Monday). I was thankful for a bit of a warmer day today.
At around 1pm, while at the BBQ (on her tower watching) Asher had a 2 minute Vacant seizure. She was still moving a bit, but could not talk. Later in the afternoon a teenager from the neighbourhood came over to chat about first aid care for Asher. She is going to do some carer support hours for us, and there will be times when the older girls won't be here. Before she has always had them here as a backup for medical stuff. After we had gone through things she hung around for visit. It ended up being a blessing that she did as Asher had a 1 minute Tonic Colonic at 5pm. It was good for the neighbour to at least get to experience one with us all around and handling it. It makes it that little bit less scary if it happens when she is here without us.

Monday 20th: Ruth doesn't do karate anymore, and so I encourage her to use that evening time to get Guiding things done. This evening she did some more of her weather badge. Lovely clouds you created Ruth.
Hezekiah didn't attend karate last week, but decided he wanted to go again today. So we went up with him. Ruth and Hezekiah on bikes and me pushing Asher. Wonderfully he decided to go again on Wednesday night. I told him not to worry if his legs get sore - that just means they are getting stronger. When he got home he told me "my legs are a bit sore - but that's ok". Such a brave strong boy. 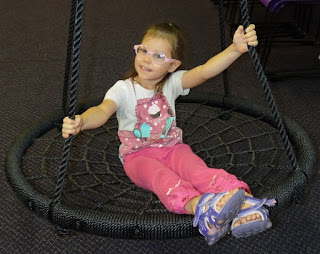 Tuesday 21st: Champion Centre this morning. When Margi (OT) tried to introduce a new game to Asher, she just got very agitated and wanted to leave. Thankfully this swing helped calm her down a bit and then we tried again. 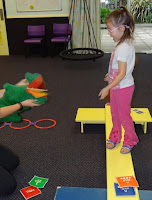 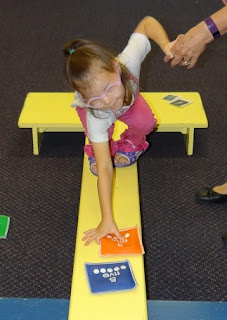 Margi had already shown her how to walk along this plank and then around the semi-circle of rings. She had done that with no issue earlier. Thankfully, after the swing, she was willing to give this new addition to the game a try.
At first she had either Margi or I holding her hand as she leaned over to pick them bean bags up, but after a couple of goes, she could do it all on her own. She then enjoyed it so much she didn't want to stop.
On the way home I wanted to try and exchange a faulty bread machine. I didn't need to be in the shop long, but it was far too long for Asher. As the box itself was rather big, I didn't bring her buggy with. BIG mistake. I had some puzzles, but after doing 2 of the 4, she looked around and just lost it. She just screamed and hit me in her attempt to get loose and get out. Eventually I had to just leave. It was an incredibly hard thing to go through. On reflection, it also makes me so sad. This is how stressful new and different situations are to her. I think if I had her buggy with, she would have a sense of security in it. So I have learnt that lesson well. 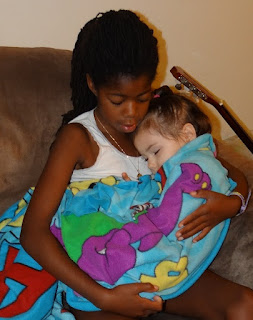 Wednesday 22nd: Asher had a 1 minute Tonic Clonic at 7:15 this morning. Thankfully once she was asleep I could give her to Ruth and get her breakfast finished as well as the rest of the packing for the day. She woke at 8:15 and had to have her breakfast. So we dropped the older children at school first (they need a lift on a Wed because of the guitars) and then I took her. She normally arrives at 8:30 and is one of the first to arrive. Today it was closer to 9 and because it was so cold out - they were all inside. This was really overwhelming for Asher. It was loud (even for me) and then she was stuck inside too. So she had a bit of a rough morning and was looking forward to coming home, even half an hour before I was due to arrive.
She had a nice relaxing afternoon though and I managed to go through an IP (Individual Plan) preparation document in preparation for the IP for her at Champion Centre next week. It is such a blessing to have a whole team of ladies working with me at developing strategies to help with issues, and ways to help Asher reach her potential. 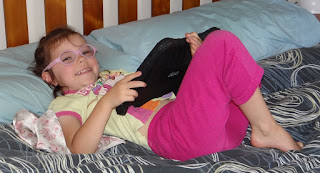 Friday 24th: This is Asher's new favourite spot and activity. On our bed with an iPad.
Rachel worked almost a full day yesterday instead of just the morning, and worked till 2 today, so I was especially thankful for Josie's help with watching Asher this morning. After lunch we just chilled out in the room till we had to fetch Rachel. 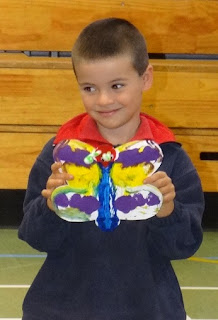 Thankfully Rachel could then watch Asher while I headed up to assembly.
Whero class read either a bit about a butterfly, or about the Hawarden Show. Hezekiah had written a nice story about the show, so he read that.
Then they all showed their butterfly art. 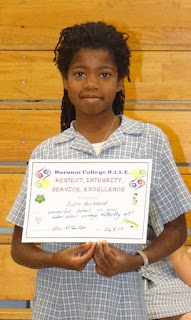 Ruth got a certificate today for "wonderful detail on your water colour vintage butterfly art!"
Well done Ruth. You do enjoy your art and I know you always put a lot of effort in. 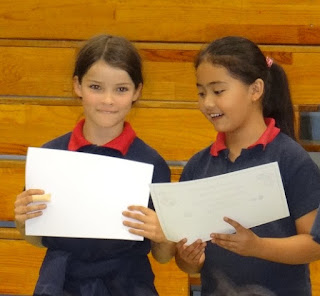 Hannah also got a certificate today for "being confident and enthusiastic at maths problem solving and being convincing with "I Think That Means" in Reading." Well done Hannah.
Your teacher noted that even though you have gotten a certificate recently, you have done so very well that she had to award you one for all your effort.
Hannah was pleased that one of her best friends got a certificate too. :-) 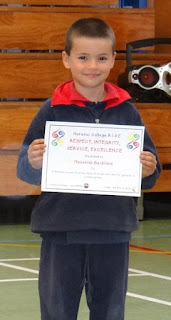 And then Hezekiah got one too for "A brilliant recount from the show all on his own, and for going up a reading group." Well done Hezekiah. You are doing so well on your reading and it was great that you got to share you show account at assembly too.
Previously when they had to do "writing" he was rather intimidated by the whole process as he knew he could not spell the words. So he stuck to really simple things. It is great that he now realizes that he just has to do his best at trying to write the words that he wants. He then reads it to the teacher and it gets typed up for him to read at assembly. I remember him telling me during the week that his teacher had said he had done a really good job at sounding out the words.
He is also really enjoying his new reading books.
Posted by Buckland at 10:00 PM