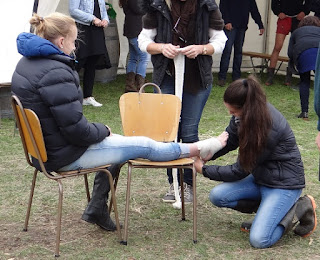 I encouraged Rachel and Daniel to enter the Youth Challenge today. It started a bit later than expected, but Ruth and I stayed to watch them.
Rachel was getting so nervous through the afternoon and started wishing she hadn't registered. She got over her nerves though and had a great time. Now looking forward to doing it again next year. :-) 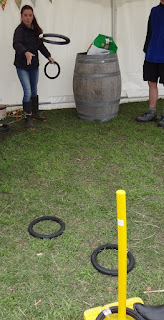 Rachel was confused as to why bandaging someone's ankle would be a challenge - as that was easy for her. It was a nice range of challenges. 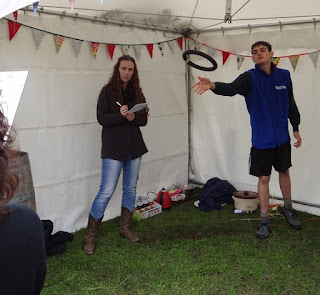 Ring toss (they had horse shoes last year, and both are quite a challenge).
They also had to answer some questions that a police officer had (on car and gun safety). 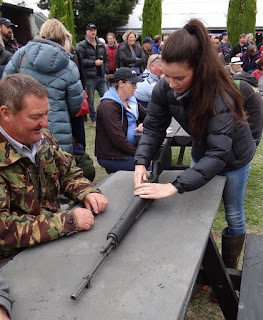 Rachel got really worried when she heard that she would have to disassemble and reassemble a rifle. They did give a demonstration though. She was doing incredibly well actually, when she just didn't push the trigger part hard enough to get it to click in. She then took it out to try again, and it then took her over half a minute to get it back into the right place. It's a lot harder than it sounds. There is a real trick to getting that part to sit sweetly. And it takes a lot of strength too. Everyone would have done a lot better if they had a 2nd try. And that was in itself the challenge. 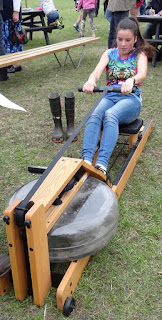 Some rowing. The guys did 250m and the girls did 200m. Rachel said she struggled to go faster, and wished it was rather a longer challenge, seeing how far you could go. 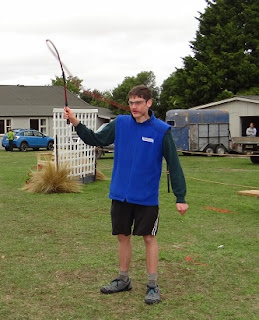 And then to crack a whip. This is way harder than it sounds too. Almost everyone struggled with this. Rachel got so frustrated because when she picked it up for a bit of practice, she got a perfect crack. She couldn't get another perfect one after that. She still got 2.25 points, so they must have given 1/4 points and even 1/2 points for different "results" in the whipping sound. She did get close a couple of times.
There was one guy who clearly had experience. He was swinging it around his head and cracking it both sides as she changed direction. It was amazing. And so loud that the whole area just stopped and watched him. When he finished he got a huge round of applause. It was great to watch, and not a huge surprise that he won overall too. :-)
Posted by Buckland at 10:00 PM