Certificate, cloud and a cuddle 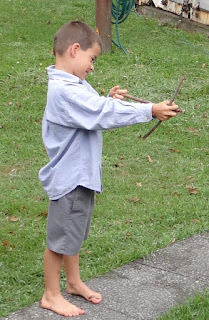 Saturday 25th: Ruth headed off on another Kiwi Watch today. This time just a day trip. So 14km in just one day. Some very tired legs when she got home. Well done Ruth.
For this trip they didn't need to re-bate the traps, but just check them and empty any animals that had been caught. 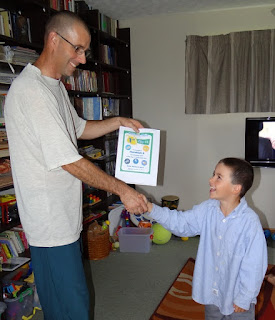 LEFT: I often see Hezekiah outside with two sticks as a bow and arrow. :-)
RIGHT: Certificate time at home too. He loves getting her Reading Eggs and Math Seeds certificates from Dad. He is so diligent with doing work on both of them as soon as he gets home from school. And the work is paying off as he is reading so well and his math is also constantly improving. Well done Hezekiah.
Sunday 26th: Hezekiah has really gotten into this "writing" thing for school now. He was thinking today about what he could write about this coming week, and wanted to practice.
Monday 27th: Just as we were getting ready to take Hezekiah up to karate (he goes a bit later at 6pm), Asher had a Tonic Clonic seizure that eventually lasted for 11 minutes. It is always so emotional for me to watch these longer ones. They are so violent on her little body. Thankfully she had been having a little play on the iPad on our bed when it happened, and so I was thankful her head (and her whole body really) had a nice soft surface. I am really grateful that it has been over 2 months since her last long one. When it got to 1 minute and her lips were nice and pink and it didn't stop, I was concerned that it may go on for a while. I'm glad Ruth was at least home with me as it was nice to just have someone else with me. 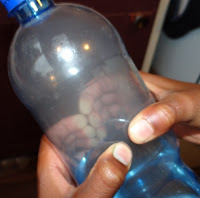 While Asher slept Ruth did a experiment for her Guiding Weather badge. Today she learnt about what is needed to make clouds. Water vapour (hot water in the bottle), particles like dust (we lit a match and then dropped it in and quickly closed the lid - trapping some smoke). And then air pressure. When she holds the bottle normally it all looks clear, but when she pushes (and created pressure) then a "cloud" appears inside the bottle. Cool experiment Ruth.
Unfortunately Asher was so tired that I struggled to wake her for her evening snack. So I made a keto shake and syringed that in. I must have gone way too fast though, as a few minutes later she vomited it all up. Thankfully "missing" that snack didn't cause her ketone levels to drop too drastically overnight and she was fine in the morning. 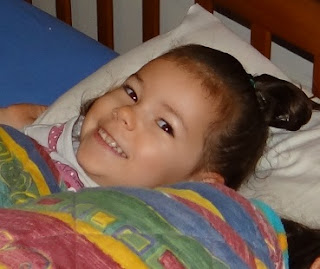 Tuesday 28th: Today Asher stayed home with Rachel and I headed off to the Champion Centre for her 6 monthly IP (Individual Plan). It was great brain storming with the whole team (including her EIE and another teacher from preschool) on ideas on how to help Asher in the areas that are most challenging for her.
I then got a few other things done on my way home. I'm so thankful for Rachel watching Asher so that I could have such a productive time out.
Friday 31st: Such a cute little face. Asher sort of discovered where Hannah sleeps this week, and so as soon as I had brushed her hair, she headed to Hannah and hopped into bed with her. 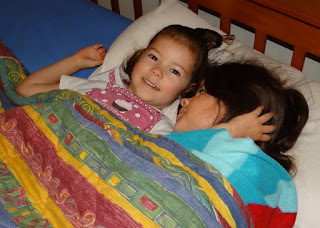 Such a nice alarm clock for Hannah. :-)
At 4:15pm Asher had another long Tonic Clonic seizure. This time thankfully under 10 minutes (so not needing a 2nd dose of the extra meds), but still 8 1/2 minutes. Again so emotional for me to watch. It was again so hard on her little body. And that was event especially on how she slept afterwards. 3 hours later we could still not wake her. So she missed dinner and her snack. I knew not to try the keto shake again, so just took her "juice" part of her dinner and syringed that in (only 30ml compared to 100ml on Monday). I thought it would wake her as it did on Monday, but she just slept through it. Thankfully she got that bit of fat in, as her ketone levels were fine the next morning.
Posted by Buckland at 10:00 PM