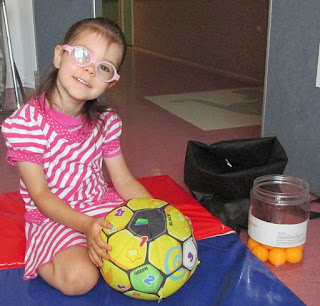 At 6:25 Asher had a 1 minute Tonic Clonic. She shivered quite a bit afterwards, so I lay with her on me for a while, helping her to breath deeply and relax. Thankfully she did get into a deep sleep and slept till 7:30. This also allowed me to have my breakfast before she woke up.
She wasn't interested in drinking it this morning, so I just used a syringe again. It only took 20 minutes, so I didn't mind. It's a new ratio and a new taste too as and I am using a vanilla flavoured powder today. I was sure she would quickly get used to it.
Her game while we waited for the dietitian and the doc was alternating between throwing a ball to me, and putting the table tennis balls into the black bag. I'm glad I brought those balls with (the big ball was from the play room).
They were just as pleased as we were with how well Asher had drank her meals yesterday, that they were willing to consider going to 4:1 as an option after today if it's necessary. It all depends on her ketone levels and how we can get them to be nice and stable. It is a matter of just waiting and seeing how her body responds.
At 10am she drank her meal in 5 minutes and so we headed off to the Botanical gardens again. I picked some weed flowers before we reached the gardens and so that helped keep Asher relaxed.

She loves pulling them apart. It allowed me to stop and take some photos. Normally she just gets upset when you stop walking. The funny thing was that at one area there are loads of wild looking plants (including her favourite weed) and I felt guilty for picking some for her. I had picked her some yesterday, but there were so many more people this morning that I felt quite shy doing it.

Interestingly I didn't see any signs saying to not pick the flowers (only to not stand in the flower beds). :-)
I have never really liked these flowers even though I have special memories of my grandparents house with them outside. They did look really pretty in this area though as there were so many (and nothing much else). 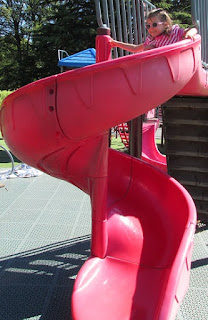 Although Asher again asked to go to the "water" (shallow pools) she didn't ask a 2nd time today. She found this little slide she missed yesterday (left). Then she did loads of swinging, and then she found this bigger slide (right) which she so loved. I didn't show it to her yesterday as it was so hot in this area - we kept to the slide in the shade.
We then headed back for lunch. She drank half of it and I used the syringe for the other half. It took about 30 minutes, but that also included a trip to the toilet. She is a bit constipated (a side effect of this diet) and so she has started on laxatives to make sure she doesn't get uncomfortable. 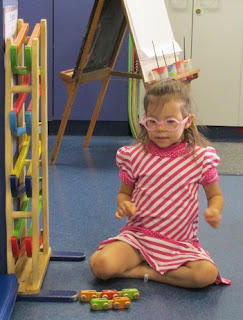 Off to the play area where she spent 45 minutes alternating between throwing a ball to me and putting these "cards" on the track. She had such a little routine going. 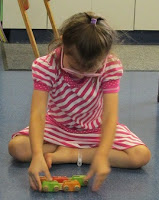 Throw, place big car on top of track, throw, place small car on top of track, throw, take big car out the bottom (and place straight), throw, take small car out the bottom (and place on the further side of the big one) throw. Repeat this entire pattern over and over and over again. And don't forget the vocal accompaniment for the throws. A solid 45 minutes. I tried to change things up a bit by changing the balls (she tolerated this) and then I got some skittles but she wasn't interested. The furthest I got variation was throwing 3 balls to her and so she created a bit of a new routine for that at the end. 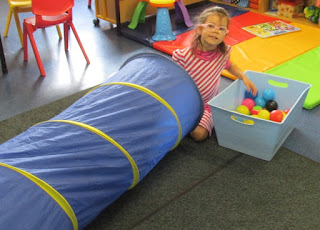 At 2pm we headed back to the room to do blood tests. I was thrilled to see her ketones level up to 3.3. It was only 0.8 this morning. So this was wonderful. The dietitian was saying we need to at least get it up to 2 as a starting point, so this was wonderful progress.
For her 2:30 meal she was actually asking me for "juice". So I wasn't surprised when she had it done in under 5 minutes.
Then we headed back to the play room. I was feeling more rested now and so was more creative in finding different things for Asher to do. 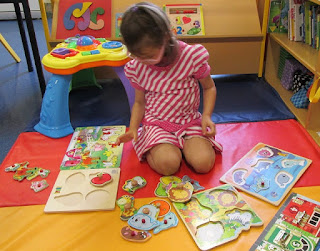 Surprisingly she wasn't too interested in the balls I found, but did throw them all into the tunnel I got out.
She spent loads of time getting tickled, but eventually I needed a break from that too. So we read a couple of books (more tickles) and then she picked up one of the wooden puzzles. So I encouraged her to do all 4 of these. I had expected her to just gravitate to them, but she obviously just feels comfortable with the ones at home. Up to this point she just goes constantly to the "doors" one that is also at the Champion Centre. Perhaps the familiarity is what is so calming her for (not the puzzle themselves). 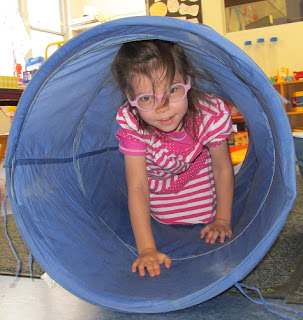 It was great to have Daniel drop in for a visit this afternoon. He found us in the play room and could get to see some of Asher's energy. She really has been quite hyperactive at times today. So it's something I need to chat through with the dietitian to understand more what is happening.
I managed to get her playing a little game with me where she would go through the tunnel and then come for a big hug (and a shake). I added a few extra things and changes and that was a nice way to keep her busy for a bit.
By 4pm she was asking for food and she had to wait till 5. It was similar with her last one at 7:30. So we have let the dietitian know and she will be increasing her calories tomorrow. I don't quite understand how Asher can be both hungry and have all this boundless energy. 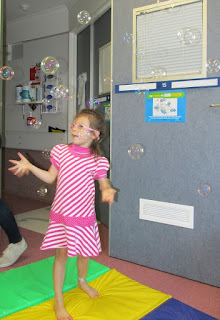 I was thankful for the Radio Lollypop people who came around again this evening. Again the request was for bubbles and the two of them blew so many. Asher had a ball. Squealing "pop" all the time. She had a great time, and got some of the at exta energy out again (she keeps asking for tickles and eventually I'm exhausted from tickling). So it was more a help to me. :-) There is no way I could blow that many bubbles, I would be totally light headed. 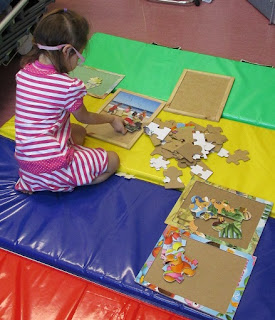 Her 5pm and 7:20pm feeds went really well (under 5 min). It was a long wait between them though but thankfully she went through all these puzzles again after the Radio Lollipop people left. She had a routine of putting a piece in and then throwing her blanket at me. Again with vocal accompaniment.
Earlier I had even tried to give her a bath to give her something different to do (and kill some time). She wasn't too comfortable with the metal bath though (and I even wonder if she had a little episode when I first put her in). It didn't last anywhere as long as it would at home. 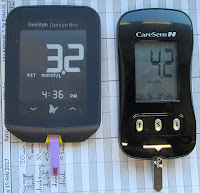 Blood tests before bed. Ketones still nicely up over 3 and blood sugar stable (it was 4.1 at 2pm).
Thank you again for all those who are praying for us through this time. We are so grateful for how well Asher is doing and now for the great ketone levels too. I have no idea what the plan will be tomorrow, but I have total peace and calm about it all. We really do just trust her dietitian and doctors to guide and direct us through this all. I have a few questions (like her hunger and energy levels) but know that they will instruct and guide and that they really do listen.

And a last photo for today - for my children who asked if my "bed" was comfortable. It really is. I am so glad it's a proper stretcher and good mattress (and not just a chair that folds sort of open - as I have had before).
I'm getting tired earlier and earlier each night. So I'm off to bed now (once I have made it - that photo was from last night). :-)
Posted by Buckland at 10:24 PM