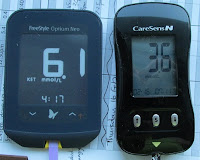 Asher woke at 6am gagging. Thankfully she fell asleep but when she woke again at 7, she was gagging again (and spitting up a little bit). I got a bit of a fright when her ketone levels was up above 6. It normally drops overnight, so with it just 3.2 last night, it was a real shock for me. Toby was onto it though and quickly checked the "standard procedures". When it's above 6 a bit of extra sugar / carbs is given. So I added the 3g of extra carb to her morning meal and gave that to her very slowly. I didn't want to put too much in her tummy and give her something to throw up. I learnt later that the elevated levels were possibly a cause of the gagging. Thankfully the food did help things settle and she felt better within the hour. 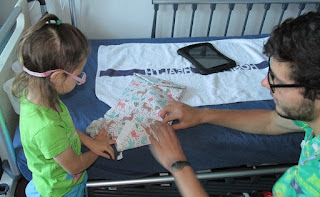 Toby then surprised me by bringing a present for Asher. The nurses had bought these for her and we had a number of staff saying "Happy Birthday" through the morning. So very kind of them.
I then had a good chat with her dietitian and neurologist. We had her play mat on the floor and again they both joined us on the mat. The neurologist was on his haunches and so Asher headed over to take a seat on his lap. She enjoyed some cuddle time with him and got some tickles out of him too. 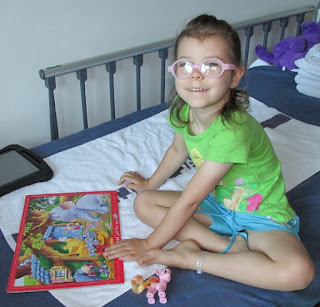 They were not too stressed about the high Ketone level and explained that levels can peak and fluctuate through the first few days. So they said that if I was comfortable, we could head home. We know that the 3:1 ratio is as high as what we will need to go. We will wait a few days and if it keeps spiking then the dietitian will look at slowly adjusting the ratio (we could even just drop it to 2.75:1). At least I now knew how to "treat" her if the levels go above 6 again. I will also have easy contact with the dietitian over the whole weekend, so I am not on my own and I can always call her if I'm really worried about something.
So I spent the morning packing. A much bigger task that what that sounds. I had the big rucksack on my back, 3 bags over the back of Asher's pram, and then Toby organised a trolley for me that we loaded up (and one of the available nurses pushed to the entrance for me). 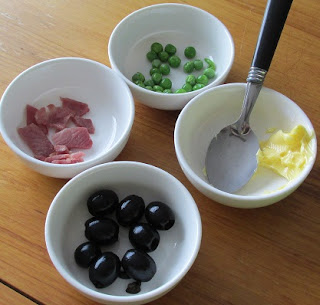 We eventually got home just before 4, I quickly got some important things unpacked (like the scale) and then Brendon headed off with the 3 older girls for dancing. It was their first day back and Rachel has been so looking forward to it.
I then got Asher's prescription into the Keto calculator that I had downloaded and started trying to sort out a menu for dinner for her. She had seen the others eating pasta when we got home and she desperately wanted some. So I knew I couldn't give her a shake but had to give her something to chew. So I came up with a menu and although she was at first upset about not getting pasta, she then accepted the "no" and so enjoyed her dinner. After these she had a bowl of strawberries in a floor of cream.
By 6 she was a bit restless, so Hezekiah joined us for a walk up to check the post. She was so happy to get out. 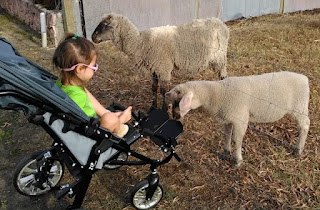 Brendon and the girls got back just before Asher headed to bed (earlier than I expected). Her ketones were up to 6.1 again. Knowing that levels can drop overnight, I checked with her dietitian if we should treat it. She said yes, but as Asher had already had her evening snack we gave her the extra 3g Polycal (the carbs) separately. We didn't want her waking during the night gagging.
So that was Asher's 4th birthday. I was so busy I didn't get to take many pictures. I was thankful we had her cake and celebrated last week (hopefully I will get that blog post done soon).
It was so funny today as she didn't want Happy Birthday sung for her and refused to sing it. She enjoyed it last week and sang it herself a number of times. So I think she saw it as having happened last week and it was done. So at least she isn't aware of the strange birthday she has had.
Thank you so much to all those who have been praying for us through this week.
Posted by Buckland at 10:00 PM