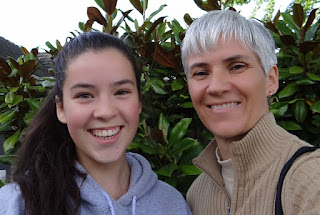 Rachel and I had a really early start this morning, leaving just after 6 for her orthodontist appointment at 8. We had no idea what the traffic would be like, so we planned to arrive a bit early rather than hitting peak traffic. Rachel's teeth are always really sensitive when she has anything done on them, so it was rather uncomfortable having the braces taken off. She was thrilled when it was done though. So a great time for a selfie. Then we had some girl time and got some shopping done before heading home. 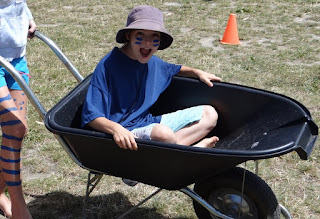 Brendon headed up to the school with Asher to get some photos of the Tabloid sports. Asher didn't want to stay very long though, so he got a few photos and then had to head back home with her. 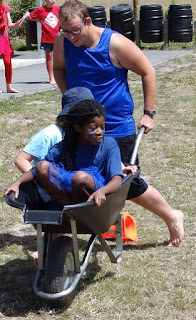 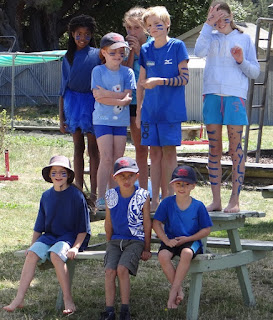 It was nice that the children were all in the same group - so he could get photos of all of them in the same area. 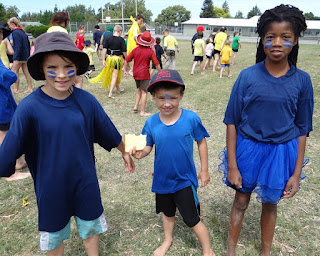 When we got home I headed up to the school to fetch the children's uniforms so that I could get them washed before school was finished. They want us to head off to camp as soon as we can once they are home.
I then got as much packing done at home as I could but still wanted to get back to the school to get some more photos. I eventually arrived just as it finished and got this photo. I should have brought some extra clothes for them though, as they were so wet. They had a fun time though and were really excited about us heading off for the combined church camp.

We left a little later than anticipated, but arrived with enough time to get unpacked. Thankfully the girls had help with putting up the tent we borrowed again for them. 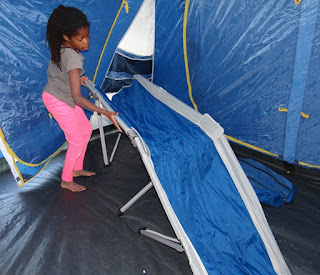 We borrowed a different stretcher for Ruth this time and she was so impressed with it. Unfortunately the valve for the blow up mattress for Rachel was not in the box. Thankfully there was an extra mattress in one of the rooms that we could borrow for her.
Asher struggled a lot to get to sleep tonight, even though she went to bed later than normal. It was all just so new for her. Eventually I had to go in to give Hezekiah some water, and she showed me her Barnie blanket, the Dora on her pillow, her dog teddy and her cuddly blanket. So she was finally focusing on all the things that we had brought with to help it feel a bit more like home, and she was asleep not long after that.
Posted by Buckland at 10:00 PM