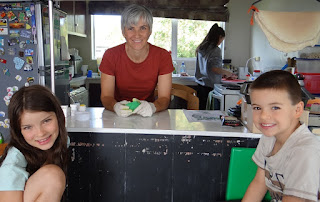 Mon 30 Jan: Only Asher starting at preschool today. We arrived a bit early so that I could do the termly seizure training with the teachers. Ruth came with which was a great help as she kept an eye on Asher while we chatted and I answered questions. Then I headed up to the school for a quick meeting with the older girls teachers.
We had someone come to have a look at the automatic Nissan Pulsar today, and we are so pleased to have it sold. 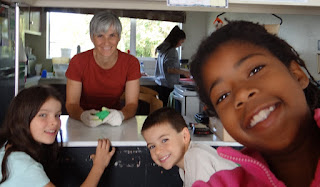 My big job for this morning while Asher was out - was to get the "cake topper" made for her birthday cake. I had two very eager spectators. I asked Ruth to take a photo and then she decided to include herself in one too. :-) 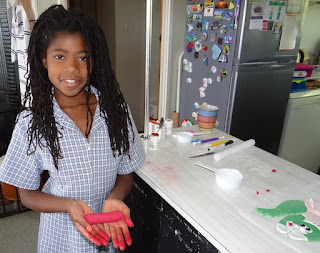 I then enlisted Ruth's help to colour some of the icing to red for the roses (Dorothy loves red roses). Only after I took this photo did she say "Oh - I suppose I shouldn't be wearing my school uniform". I had not even realised. She had tried it on to check the length and we both forgot. 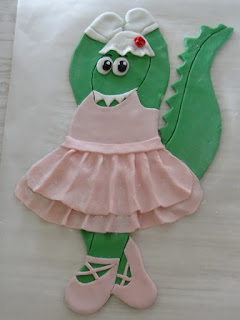 I got most of Dorothy done. I just need to add some yellow spots at some point. I was very pleased with the result. And it will be much easier next week to quickly make a cake and pop this on top. :-) 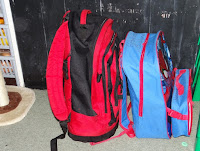 School bags all out and sorted for school starting tomorrow. I leave early with Asher for Champion Centre on Tuesdays this year - so I wanted them to be as ready as possible this evening. I even had most of their lunch items packed and ready in the fridge. 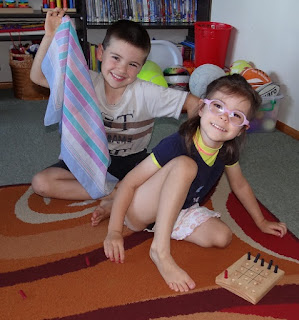 Some playing before bed. Paula at the Champion Centre had suggested this noughts and crosses for Asher just because Asher loves pegs so much. Paula picked it right. Asher just has fun taking the pegs out and then putting them back in again. 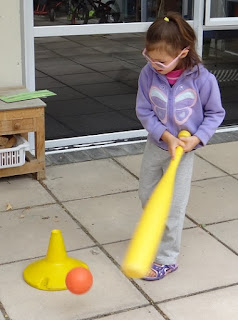 Tuesday 31 Jan: We got away by 7:45 which was my goal. It always helps if we arrive just a couple of minutes early. Asher is in the transition class this year (transition to school at 5), so things are a bit different. They have a group time to start where they do the roll and talk about the weather as well as looking at a book together. Similar to mat time and so the hardest thing for Asher in this new class. She was very stressed this morning and spent most of the time hitting me. I held her on my lap and that was the only way she could show her frustration. I can't allow her to just wander around (which others may allow their children to do when they move into this class). The issue with Asher is that she forms patterns. If I let her wander around from the start - that will be what she will want to do every single time. So I felt really bad for everyone else in the room, having to see her so aggressive (and loud).
I have already thought of a plan for next week though. I have asked for duplicates of the visuals that the teacher uses for each item, and I will put them on Asher's "finished" visual pocket (that I use at church). That way she will recognise a structure and know what is coming. She will also be able to post each visual once that is done. Hopefully that will give her a sense of comfort. 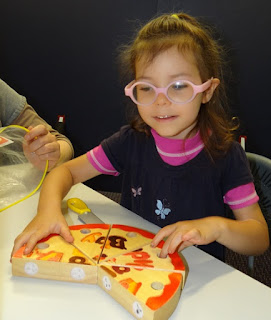 Above: She started with outside time with her OT and the OT wanted her to follow a set pattern of visuals. That didn't go too well. Asher is used to having free play outside. Eventually the OT was happy to let her just do what she wanted and she spotted the T-ball and had fun with that. It was good to end the session on a good note.
At the Early Intervention Educator I got a bit worried when I saw her first visual was a book. Asher has never been happy with reading books at Champion Centre - and especially not with the EIE. Thankfully she had picked books that had songs that Asher knew, and so as soon as we started singing Twinkle Twinkle, she was caught. She enjoyed it so much that she happily accepted another book (with song again).
I was very thankful that the EIE, Alex, had the plan already drawn up when Asher arrived. This was something I felt would help Asher tremendously. 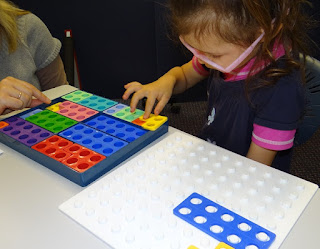 I wasn't sure how it would go with having it drawn up on a page, but Asher adjusted very quickly and when we said we were finished with cutting (above) she happily reached for the pen to try and mark it off as done.
She flew through the puzzle because it was the same cut as her Dora and Diego ones (even though a picture she had never seen before) so Alex pulled this out as another puzzle. She explained that they are using it a lot in schools to help the children "see" the maths better, and Asher had fun with it. Alex was really impressed with how well Asher worked with it. 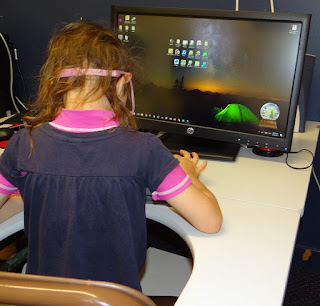 Asher loved her new session - computer with Hilary. I didn't get a photo of her working on the computer, but she had two big buttons to use and Hilary was very pleased with how quickly she was picking it up. Then she had some fun on the iPad. She did some sorting games so Hilary could see how easy that was for her. Then she had some counting ones, focusing on getting her to go from left to right. 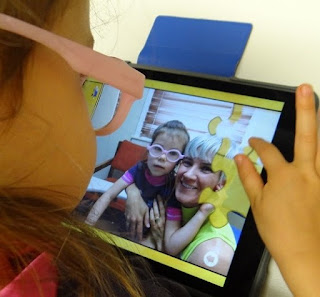 Then it was just fun with a custom made puzzle. Hilary took a photo of the two of us and Asher had fun building it. Notice that little hand up by my ear. That's a favourite position for her (similar to that one sleeping position you saw on Saturday with Brendon).


And then off to music. I was pleased to see that it was in a new room (and the one with this amazing instrument pictured below). Asher absolutely loved Ali with music last year (she was by far her favourite therapist), but got very stuck in her routine of what she would do EVERY week - without fail. As music sessions are supposed to be "child led" it was very hard to make a change. 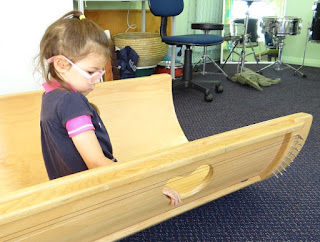 So having a new room will help break that pattern and allow her to explore some new things with music. Already today she played so long on the tubular chimes. She found some bean bags that remind her of Ali's frogs, but we just didn't put that song on, rather introducing a new one to her. It was so funny though, because she kept asking for "music please" (wanting the frog song) but started doing the actions of the new song with us. So it was very encouraging to me. I know she will be stretched and discover so much musical fun this year. 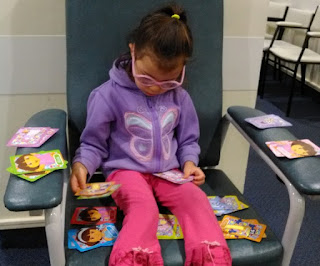 Wednesday 1st Feb. Rachel walked Hezekiah to school for his first day yesterday and today I managed to get the monthly photo. I suppose I need to start getting yearly "1st day of school photos" too.
I dropped the children off at school this morning (a little early) so that Asher and I could head into town for her follow up appointment with the optomotrist.
I had her church bag with and just allowed her to take things out (rather than using a schedule). These Dora cards are proving to be very handy.
As well as the puzzles below (that I bought when Rachel was little - so they have done really well). I love how she tips them all out, and then sorts the pieces, and then starts building. 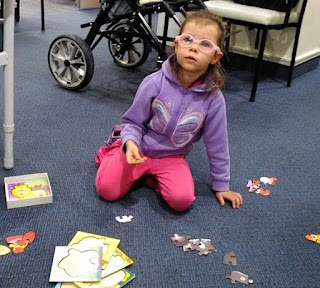 She does change the routine every now and again, so that is also good to see.
The appointments when well. The first one better with someone she hasn't seen before. She got really tired though and by the time she had her 2nd appointment, she was over it and wanted to go home. So the poor optomotrist only saw a "out of control" child again. He managed to have a quick look in her eyes but it wasn't that easy as they previous lady had said she wouldn't need drops "as he has seen her before". He was a bit surprised by that, but didn't feel it neccessary to put her through that. He is happy to just get another check up with her in 6 months or even a year. 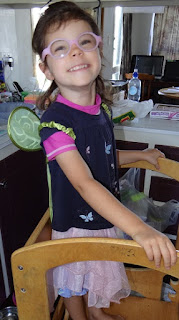 A fun photo this afternoon with fairy wings and a pretty skirt. I don't think she was at all aware of them, but it was fun for us. :-)
Thursday 2nd Feb: I had another appointment with the dietitian this morning. Brendon managed to get out of it (as I promised to give him all the info I got). It was good to get some questions answered and get a bit more detail of what is going to happen when we go into hospital. 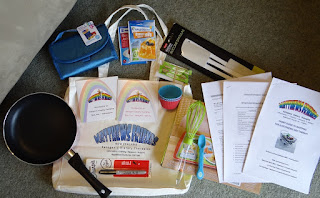 I again came away with a lovely bag full of goodies to help us get started.
I again dropped the children off at school a bit early so that I could make it on time. I was so thankful to Lynda (her preschool EIE) for coming and watching Asher for me this morning (as Rachel was at work). I got all the Special Needs Library things of for them and it sounds like they had a great time.
Posted by Buckland at 10:00 PM