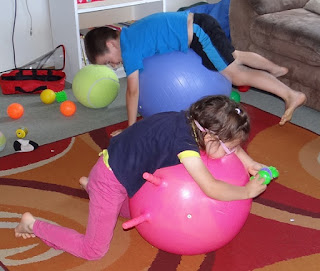 On great thing about having a clean out - is that you find some things that can come out of storage. So these two balls got blown up again and they are having so much fun with them. 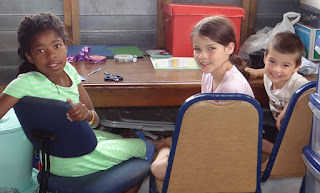 Monday 16 Jan: Out for some artwork again.
Rachel and I headed into town after lunch. It was a blessing having Arianna here to help with the younger children as Brendon didn't need to take the afternoon off. We had a few errands to do including having both our eyes tested. I'm and AA member now and can have a free eye test every 2 years. It made me realise I haven't had my eyes tested as an adult - so it was good to know they are fine. Rachel's have improved since she last had them tested (and got glasses). 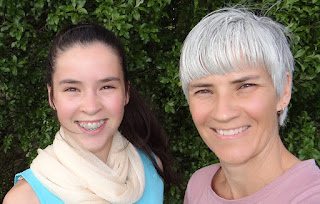 Although she is still very slightly short sighted (so she can't see as fine details on the mountains way ahead), she is perfectly fine for driving.
Then we headed to the orthodontist and got some very exciting news. Rachel's braces are coming off in just over 2 weeks time, on Friday the 3rd of Feb.
So it was a big decision today about what colour elastics to choose - as these are her last ones. She went for turquoise which matched the top she was wearing beautifully. :-) 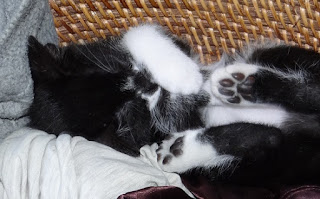 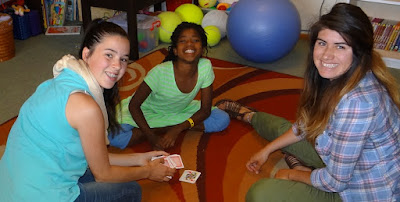 Rachel teaching some new games with the cards that we bought today. 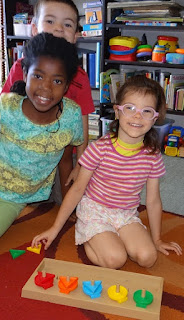 Tuesday 17th: I was really impressed this morning when Ruth managed to get Asher to put these shapes on in their colour groups. She has always only every put them on in their shape groups, so it was wonderful to see her willing to allow Ruth to direct a change to her game.

Rachel and I worked a bit more on the bookshelves in the garage this morning and made this tall one available for Rachel to use in her room. She had fun today taking a whole lot of books out to her room (thus helping clear a bit more of the lounge book shelf). 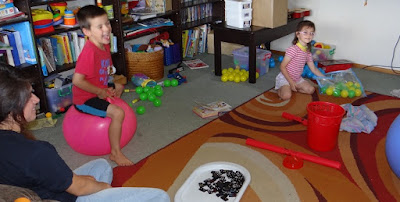 Arianna watched Asher while we were busy. Asher was rather stressed with me out of the house but thankfully she found her bag of balls that she uses at church and she had fun sorting those into colours around the room. I normally keep them for only when we are out - but today they were needed. The activity is very therapeutic for her and she needed that today. 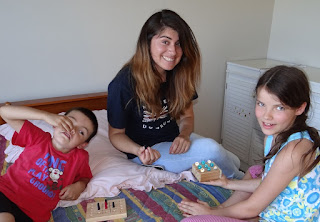 I took Ruth to the Love's for Danielle's birthday party and sleep over. These two enjoyed some more noughts and crosses with Arianna.

Little clown.
At 6:45 Asher had a 1 minute Tonic Clonic. She went really blue through it, so we were thankful it was short. It was so close to bed time that she just went to bed early. 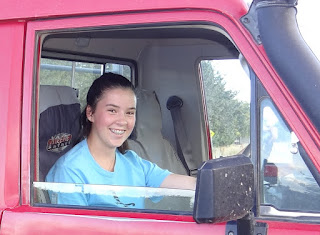 Rachel got her first driving lesson on the farm this evening. Many children in rural NZ learn to drive vehicles on farms before they get their learners. She can't drive on the farm for work (health and safety rules means "licences drivers only") but can get a bit of practice in this way. Unfortunately the ute's battery decided to die the one time she stalled. It's a really old battery, so it could not even be jump started. I was thankful Arianna was still with us as I could head out to pick them up and leave the younger two asleep in bed. 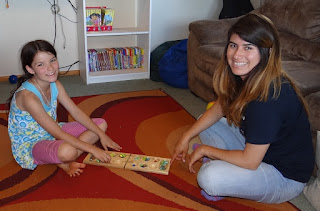 With it being only Arianna and Hannah home this evening, Hannah showed her how to play Mancala while I got some computer work done. 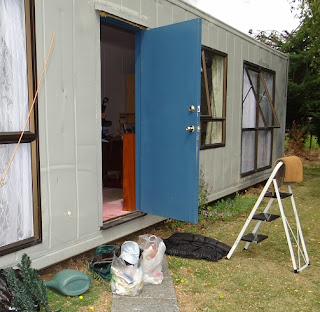 Wednesday 18th: I asked Arianna to help in the girls rooms today. I helped her a little to make a start on Ruth's room this morning while Rachel watched Asher. I picked Ruth up at 10 from the sleep over. Asher was thrilled to have another trip in the car and that meant Arianna and Rachel could both get stuck in. 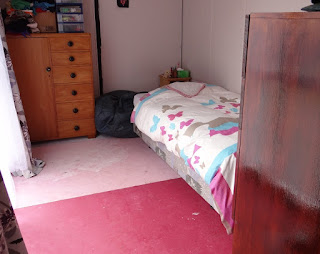 Ruth didn't manage to get much sleep last night, so wasn't very motivated to do cleaning today. So there are a couple of things that still need to be sorted (like all her draws). At least we have given her a nice clean start. 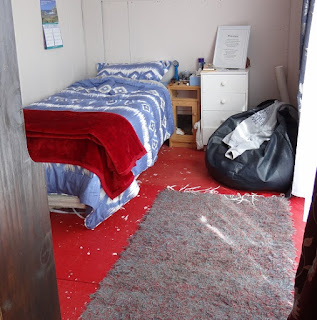 Rachel's side also nice and tidy. Some pictures went up after this photo - so I will have to take another photo at some point. It's looking nice and colourful in there now. 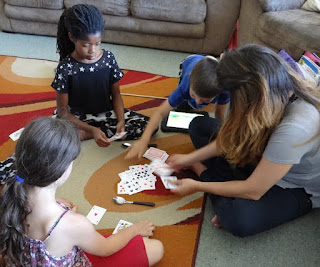 Thursday 19th: Spoons has become one of the new favourite card games. Hezekiah was doing some of his own work on the iPad but when they needed a card turned over, he was their man. :-) 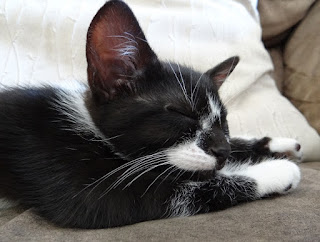 A cute photo taken by Ruth. 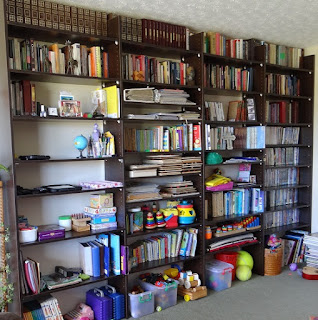 The lounge bookshelf looking SO much better after all the sorting. Arianna gave it a thorough clean today. We started yesterday actually with the top two shelves as they were the easiest for me to sort. I had a rest overnight and then tackled the rest today. It's still very busy, but it's a lot more practical and a lot less cluttered. It is a toy shelf too as this is the play room as well as a lounge. Ruth also has a shelf for herself as her room is not close. So she keeps all her guiding things here as well as her library books and any art or craft project she is busy with. This helps keep the dining room table clear (which was her storage area before). 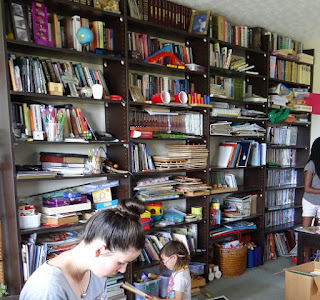 Just encase you don't remember, this is the "before" photo. I'm thrilled with the improvement.
At 5:30pm, just as Arianna headed out for a dinner with new friends, Asher had an 8 minute Tonic Clonic. I had hoped that she would eat something after the hour sleep, but she was just too tired and went to bed early.
I had a bit of an emotional week as we made the call to stop the new drug that we started at the beginning of December. Although she only had 5 seizures in December, I think it may have just been a reflex reaction of the body to the drug. She had 5 seizures in just the first 10 days of Jan. The doctor wanted to increase the dose, but we feel the side effects are just not worth it. She had such incredible pain last week with the 12 minute seizure (details at the end of this post). Her behavioural issues have also gotten worse through this week. The doctors says it sounds like anxiety. She is waking between 12 and 1 every morning to come into our bed and won't even stay with Brendon now but just cries for me. I was also concerned that she may be getting some blurred vision from the drug too. So we asked the doctor today how we can wean her off. We have dropped her down to half the dose and after 2 weeks we stop.
NOTE from 28 Jan: This has proven to be the right decision even during the weaning off weeks. Behaviourally she is doing much better. She is being much more friendly and is accepting of others again. She even stayed in her bed till 3 last night - hopefully once totally off that will continue to improve. Her vision has also settled. The issue with her glasses has disappeared. When on the higher dose she would often have days where she would constantly take her glasses off. That has stopped now too.
Posted by Buckland at 10:00 PM