After church we stopped to drop off Rachel's gear from her overnight stay, got all the togs on and headed off to Hanmer Springs hot pools. We stopped in Culverden for a lunch of "Fish and Chips". A Kiwi tradition we felt Arianna had to experience. 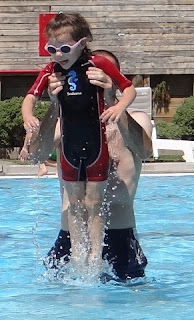 Soon after we arrived and before I had even gotten to join Brendon in the pool with Asher, she had a 2 minute vacant seizure. It started with two big jerks, and so Brendon quickly got her out the pool. He lay her on my lap and she continued to have very small twitches through it. The lifeguards were all really quick and coming to ask if everything was ok. We told them she had epilepsy and was having a seizure - and that it wasn't out of the usual. They came back a little while later to ask if we were ok and if we needed anything. It's always so appreciated when people show that bit of kindness and concern - even if there is nothing they can do. It's just knowing that support is available that is always really appreciated.
Thankfully after almost just over half an hour of sleep Asher was totally fine and was up and off. She literally didn't stop till we left over 2 hours later. At one point she tried to leave - but I wondered if she just needed to go to the toilet. So once we had the toilet break, she was back in the pools. Brendon was exhausted by the end of the day. He had to do a lot of throwing and then she also wanted to swim - without him holding her. So he eventually worked out that he could just grip the back of her wet-suit and so she had the support but felt independent. She had a ball. 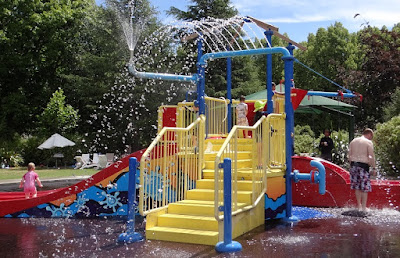 While she was sleeping I suggested Brendon and the girls head to the water slides and I would sit with Asher watching Hezekiah on the play area. He had so much fun there. Once Asher was awake and with Brendon I took some photos before giving him a break.
The play area is so much fun for the children. And we could not have asked for better weather. We had been a bit concerned that it may be windy, but it felt really calm. 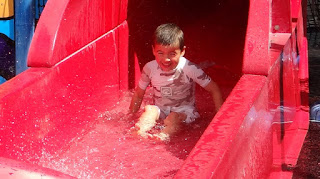 At one point Hezekiah came over to me and told me that he was a bit scared of going down the dark slide. He then immediately told me "I'm just going to do it". And he was so glad he did - he had such a great time. He started off with his goggles on (so that he didn't get splashed in the eyes) but before Asher had even finished her nap, he had left them with me telling me that he didn't need them anymore. 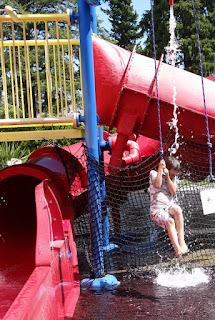 I was even more impressed when he happily played with these ropes - when you hang on them the water is released - right onto you. What a great fun way to get him used to water over his head.
I was also really thankful when at one point a little boy started crying. Hezekiah was just about to go up the steps past the boy, but I saw him hesitate. I could see he just didn't feel comfortable leaving this little boy crying. He nervously put his hand out and touched the boy on the head. I don't know what he said, but I'm sure he tried to comfort him. The Dad had heard by now and headed over, so Hezekiah was off for more fun. It warmed my heart to get a little glimpse into my precious boy's heart. 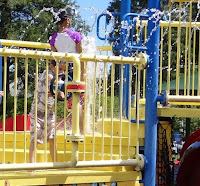 He loved all the different taps and handles to make water stop and go. It was fun for me to watch him experimenting. So when I had the camera later I asked him to go over to the steering wheel so I could take a photo. :-) 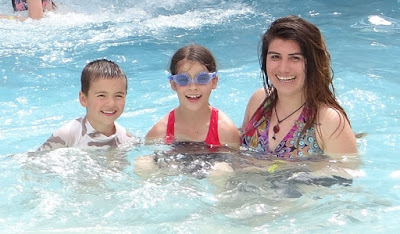 And then we caught up with Hannah and Arianna and got a photo of them. It was such a blessing having Arianna with today. She spent so much time with Hannah as well as with Hezekiah. It really helped Brendon and I with all the time we had to spend with Asher. 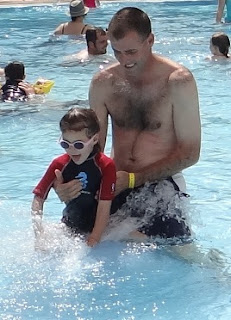 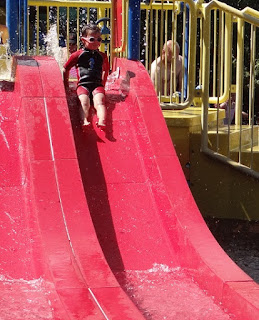 She spent a bit of time at the play ground too. She was thrilled with this slide, and I didn't want to even let her see the bigger one Hezekiah went down. I know she would love it, but it would make being close that much harder. And it's deeper at the bottom too. 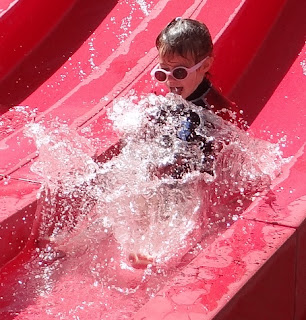 Hannah spent so much time in the current pool. She just loves being under water now. It's still quite a shock to Brendon and I. 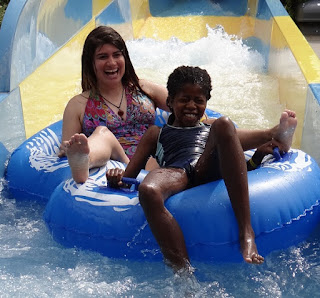 Ruth was a bit nervous about going on the water slide as she has never been on one before (and they do start really high up). I asked her to please just give it a go - as I was sure she would love it. It was Hannah's first time too - and they all had a great time. Hannah didn't enjoy as much as the others. Ruth was however especially thankful that she had given it a go.
Rachel took a video - so you can get a bit of a feel for the one with the tube. 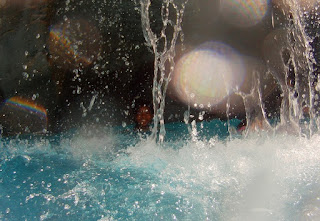 The video and the rest of the photos were taken with the underwater camera that we had borrowed for my birthday trip in December.
The waterfall in the children's play pool is always so exciting. 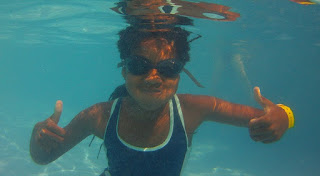 Our first proper under water photo with the camera (and last - as this was the one pool we new was just normal pool water). 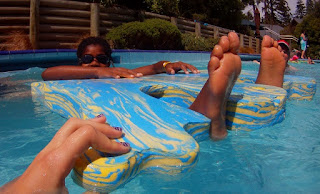 Ruth and Rachel having fun in the current pool. 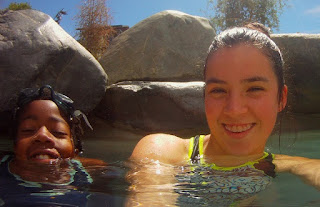 And then on to the different hot pools. 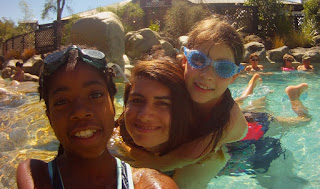 Joining up with Arianna and Hannah. 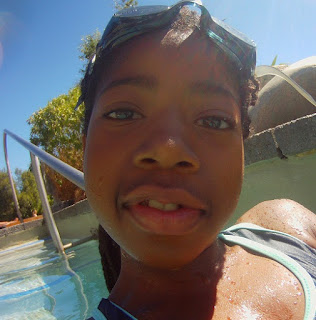 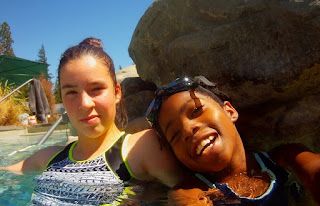 Such a fun one.

And then we finally managed to get the whole family in one place and Arianna took a photo for us. So at least I did get into one photo. Proof that I was indeed there. :-)
A fun day filled with wonderfully special memories for us all. And extra gratitude that Asher got to enjoy it all so much after such a rough start. 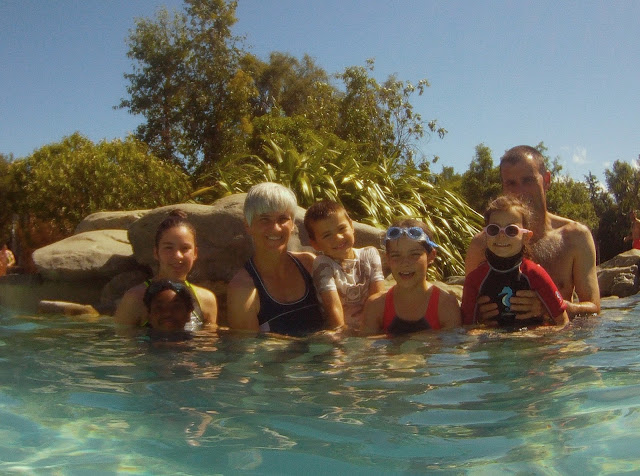