2 Kittens and a crushed finger 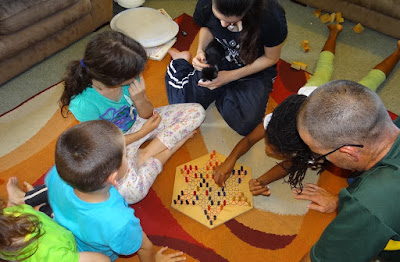 Monday 26th: Dad is back to work today. We have so enjoyed having him home over the last 2 weeks.
At least we could enjoy our first game on Rachel's Chinese checkers board this evening.
Thankfully Asher didn't try and get the pegs at all. She happily watched one of her music DVDs and did her puzzles. 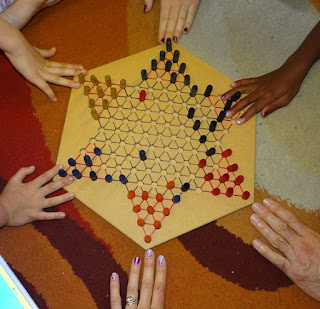 Dad did really well and won. Rachel was close at the end but Ruth blocked her from finishing. Brendon was yellow, so he was the first to get all of his to the triangle on the other side of the board. We struggled a bit to see the difference between the black and blue. We will have to put something extra on one of them for future. 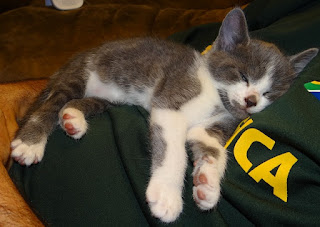 With two more kittens taken yesterday we are down to just two. It makes it much easier to give them cuddles now.
It also helps us to make our final decision about which one we want to keep between these two.
Stripes happily sleeping on Brendon. 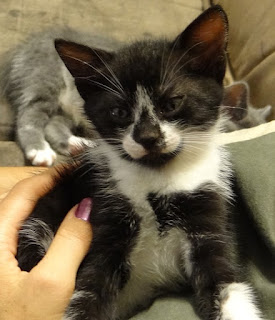 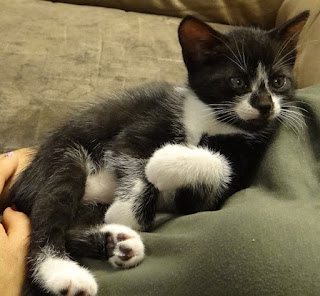 Anakin does seem to enjoy being in arms more than Stripes. Even though he woke up, he was happy to stay with me. So relaxed in arms.
We are thinking of keeping Anakin. I find it quite funny that he is the one we have been drawn to as he is the runt of the litter. Not only is he small, he also has a lot of longer hair, so it makes him look a little scruffy. It will be interesting to see what he looks like once he is bigger and has filled out a bit. He does have lovely markings on his face. Brendon called him "angry eyes" when he was tiny. 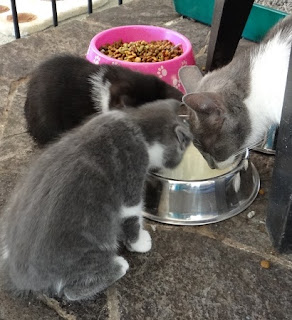 Tuesday 27th: Little Miss's milk is obviously getting less and less. The vet says she probably doesn't have much at all anymore. So we finally got some dairy milk again and she enjoyed that with her kittens. 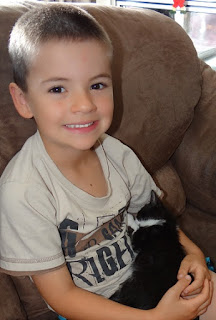 He loves having the kittens sleeping on his lap. 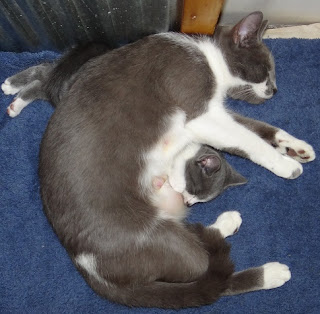 What a funny way to drink - from underneath your mother. Thankfully Little Miss is not very heavy. This was the first time I had seen this though, and so had to take a photo. So funny to see those little legs sticking out there. 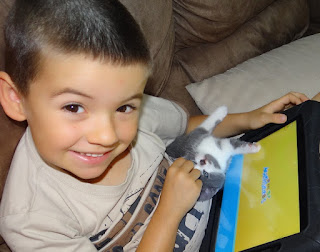 Hezekiah with Stripes while he did some of his Math Seeds. The children are all doing some work through the holidays. They are not allowed to do any computer games or watch any movies unless their work is done. Hezekiah loves Math Seeds but is being diligent in slowly working through his Reading Eggs too. He is doing really well. I keep saying to him "you read that really well" and he says "I didn't read it". He is starting to see things without having to really work at it. So that's great.
Hannah is also working on Reading Eggs (she just has the last 20 lessons to do according to the assessment). She also does some sequential spelling. 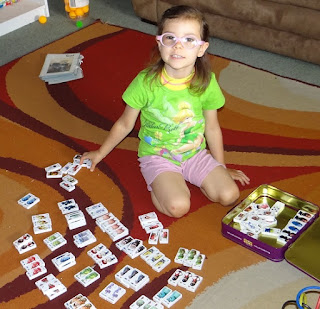 The three girls do Reflex Math and then the older 2 both do Word Smart. It's a great vocabulary program and Rachel is really enjoying all the fascinating words she is learning. It's a great help with spelling too. Rachel also does sequential spelling and she is watching the DVD lessons for Algebra Math U See. So she has quite a bit of work (2 math & 2 spelling). She can get it all done rather quickly though. It's great that they are all keeping up with their basic math and reading. It will make it much easier once the term starts up at the end of Jan.
Asher enjoyed playing with these character dominoes today. I will admit - it was me that started sorting them into similar piles. She enjoyed it once I had it started. :-) 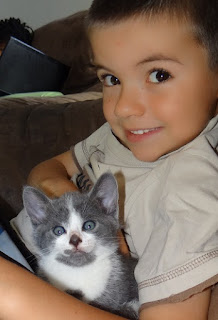 More cuddle time. So cute. This boy just loves the kittens SO much. 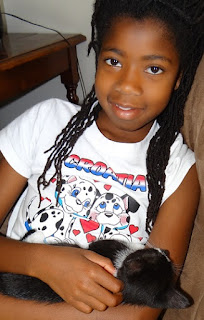 Ruth hasn't gotten to cuddle the kittens that much, so today I put Stripes on her lap when I saw him sleeping. He immediately woke up and jumped off. So I asked Hezekiah if she could have a turn with Anakin, and thankfully he stayed asleep for her. 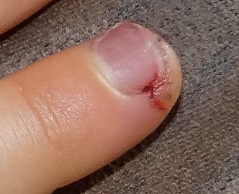 I had a huge fright on Monday morning when Asher got her finger stuck in a door. She didn't even scream in pain which confused us all (and made that the door wasn't opened as quickly as it could have been). We just thought she was upset about the door being closed. When I looked at the finger it was almost flat (well under half it's usual thickness). It was so traumatic for me to even see it like that. I quickly got her some pain medication and she spent a good hour with me, crying and telling me "sore". She wouldn't let me put anything on it (even a cold cloth). Thankfully it didn't bleed much. My heart was breaking for her and I was so thankful when the pain relief was finally working.
Our bodies are amazing and I was so relieved when through the day I saw it returning to it's normal shape (this photo taken about 24 hours later). Thankfully there were only two very small cuts in the skin (the one seen in the photo and then another small one at the top). I know it will look worse as the bruising starts to show. 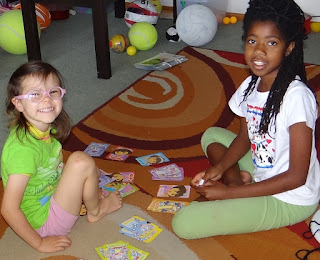 I just pray for a full recover and full use of it once healed. I had phoned the health line to get advice, and they had told me that I may need to keep giving her pain relief through today and even tomorrow, so I was really surprised when I didn't need to even give her a 2nd dose. It was also a relief to see some movement in the finger later in the day.
Ruth got a pack of Dora cards out to show Asher. She got her sorting them into the different colours. 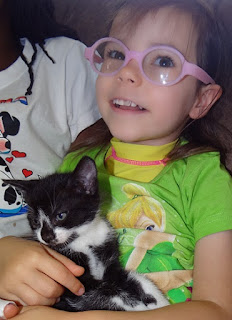 Asher getting a little cuddle from Anakin. 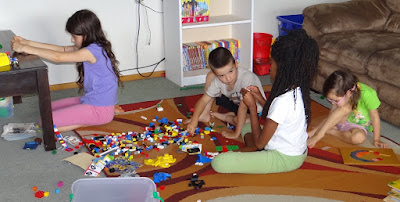 The lego came out today for a bit of creative fun. 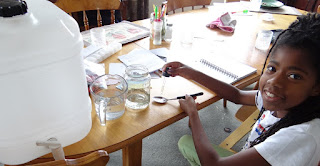 And then Ruth got stuck into doing some of her guiding work. She was learning about how much drinkable water there is available for use in the world. It compares to just 4 drops on that spoon (all the water in the world pictured by the 20 l). The 2 cups taken out of the 20 l represents the fresh water (the rest being salt). And so it get's less and less till you are left with just the 4 drops. So she showed the family this illustration this afternoon. 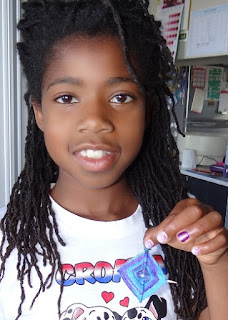 And some artistic fun with one of the badges too. Doing some Mexican art. We also had some fun games to play too.
It's not ideal doing the Guiding by correspondence, but it does give her some interesting things to do on the weekends and during the holidays. It also gets the whole family involved as we often end up being like her patrol or unit. So it's gotten us all having some fun and learning together.
Posted by Buckland at 10:00 PM