Saturday 24th: We decided to surprise the children this morning by letting them open presents. This way everyone could sleep in as long as they needed. Ruth especially needed a long sleep in with having been at bible study late last night. We are heading out tonight again and then church in the morning. So this worked well. 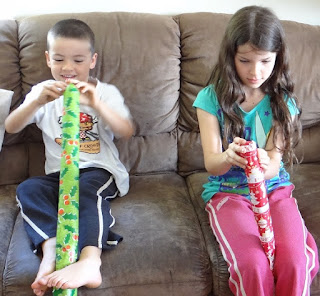 We could just have a nice relaxed morning and take our time with opening presents. We let everyone take turns with handing out a present. And we then watched each present being opened (one at a time). The only time we had more than one opened together was with the children's tops (from Nana seen below) and with these two matching presents.
When Hezekiah had seen them during the week he said they must be telescopes. :-)

We had so many presents under the tree this year. It helps that the children have a bit of pocket money that they enjoy using to buy things for each other. And then there were other gifts given to them too. I always try to keep the focus on Christ and not the presents - so it worked nicely that we had the presents today. 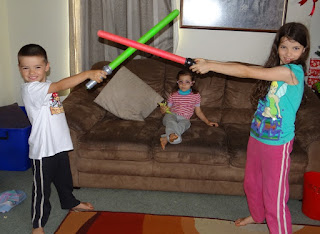 So he had a lovely surprise when he saw that they were a light sabers. Hannah wasn't thrilled to have a red one (that the bad colour) but she realised that they needed to be able to tell them apart. 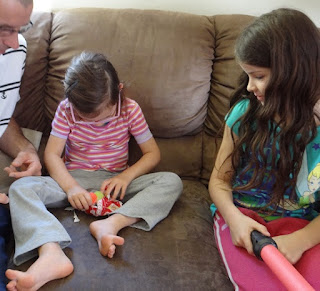 Asher did well in getting the whole idea this year of pulling the paper off to see what is inside. Here she is opening the bouncy balls Hannah bought for her. 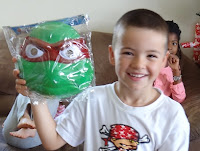 Hezekiah was thrilled with the mask Hannah bought for him. 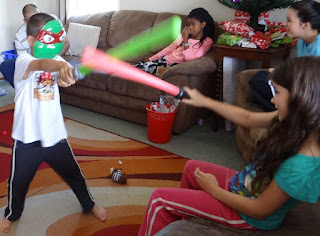 He has had a Ninja Turtle t-shirt for a long time and that has created a love for them, even though he has never watched them on tv at all. Ruth bought him the Nina Turtle movie (not cartoon) which he really likes and so he is one very happy little boy. 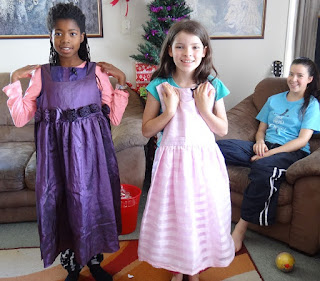 Rachel bought the girls some fancy dresses. Ruth is at the age of still liking the idea of a fancy dress, but also getting that bit older and wanting to dress more like her big sister. So I'm not too sure if she will get to wear it much (she says she needs something very fancy to wear it to). Hannah just loves dresses though, so she will get a lot of use out of her dress (and perhaps eventually out of Ruth's dress too).
The Champion Centre was given a whole lot of wooden toys made and donated by "Santa's Workshop" and they gave us one for each of the children. Hezekiah was thrilled with his small chalk board (which he uses to especially practice writing his name). Rachel got a great Chinese checkers game. 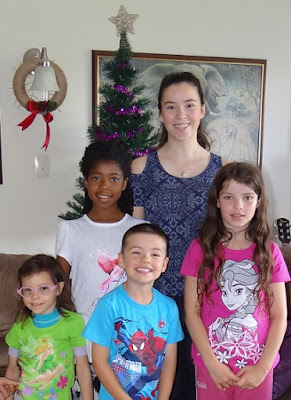 Asher's Humpty Dumpty is a hit with all the young children. It hangs from the wall and they all regularly help it "walk" up it's strings to the top. Asher doesn't play with it - but does just love Humpty Dumpty. She also got another little noughts and crosses game with little pegs that she can enjoy too.
They all opened their gifts from Nana at the same time. And they were all so excited about their new tops that they all put them on straight away. So a bonus children's photo for this month. :-) Thanks Nana. We are pleased they arrived in time. 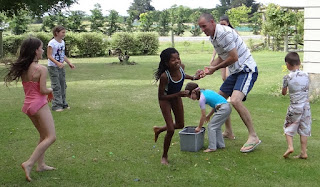 Our neighbour gave the kids a big bag of water balloons. So they had fun with those this afternoon.

Asher just enjoyed picking them up and popping them in her hands. This photo was a nice action one. Rachel had just thrown hers (which Brendon attempted to catch), and then a balloon in hard ready to go from Brooke, Hannah and Ruth. So much fun.

Asher loves trying on all the shoes that are left on the deck. Brendon's boots were here today and so she gave them a try too. She did realise that they were just too long to do anything in though. Such a cutie. 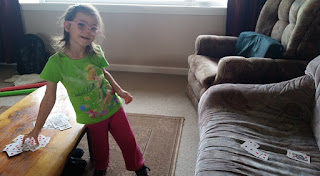 Then we headed over to the karate sensei's home for a BBQ. Unfortunately we ended up being the only karate family who were able to make it. We had a great time though. I hadn't brought many toys with for Asher (as she hadn't used any last night at the BBQ). Thankfully there was a pack of cards that she could use and she had so much sorting them. She sorted them from the table to the chair at least 3 times. 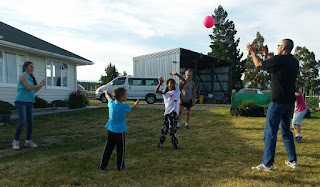 After dinner they started with some games. Asher enjoyed running around a bit and then I headed home with her. We had come in two cars as we didn't know how she would cope. That worked really well as the rest stayed for a while longer and played a load of other games. 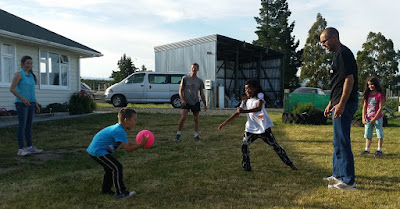 Piggy in the middle before I left. They also played soccer, touch, and frizby. 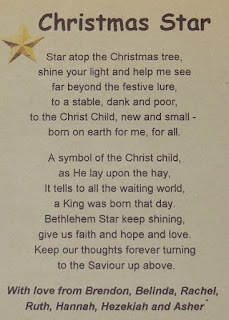 Sunday 25th: Merry Christmas.
This is a good time to post a picture of the card we made this year. We could have made so many more stars as we has so many more people we would have liked to give them to. We will have to make well over 200 next year. 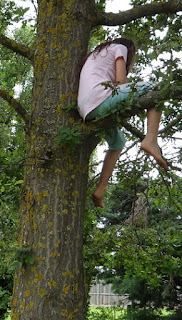 We headed to a church closer to home for their service this morning. Friends had planned to come and pick up two of the kittens after their church service, so we made plans yesterday to just enjoy our picnic lunches together. Neither family had major lunch plans with being at church in the morning. Adding their 7 children to the mix we ended up with a dozen children here - so that was fun. They played some games inside and then a few of the boys headed outside. Hannah came in very stressed about how high they were in the one tree. She said "they are right at the top". I told her not to worry, they had a lot of climbing experience. So she went out again. 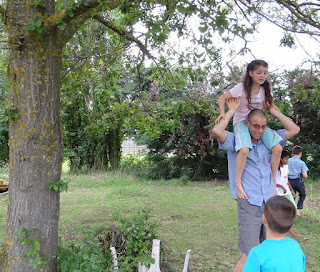 She had asked them how they had gotten up, so they showed her and she followed. It wasn't long afterwards that we got the distress call to help her get down though. So Dad went to the rescue.
I'm so glad we made the last minute plans to enjoy the afternoon together. Hezekiah especially enjoyed having all the extra boys around to play with.
Posted by Buckland at 10:00 PM