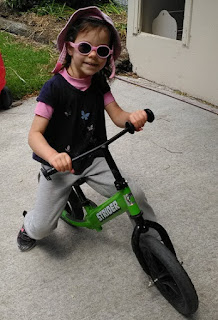 Monday 5th: When I picked Asher up from preschool she showed me how she uses the balance bikes. They are a bit harder than the one at home with really fat tires. So it was great to see her giving it a go here too. Even though she hasn't had problems with her gross motor skills, it's been wonderful to see her learning so many new gross motor skills over her time at preschool. It helps having the lovely "road" track and all the different vehicles to try. 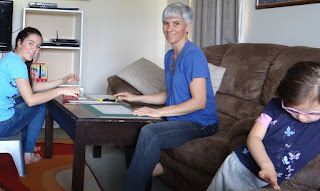 It's great having Rachel finished her Novel November as she has more time now to help with other things. This morning we worked together on the wording for the Christmas cards (from poems that we found on-line). After lunch she helped me get the cards ready. I cut and she made the holes for the ribbons.

We had a good little production line going. 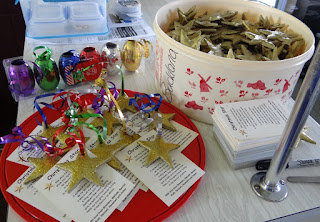 It was nice to see ribbons and stars on some and to start seeing it coming together. 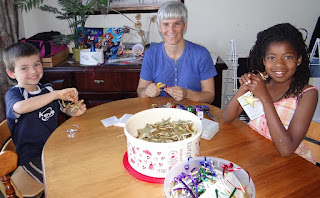 After school Hezekiah got stuck in. He was very good at getting ribbons through the hole in the star and then adding the card. I would then tie the ribbon and curl the ends. Ruth did a few on her own too.

I had my first experiment with Rachel's hair this afternoon for the concert. The curls were not as clear as I want. I want it to be more ringlets. So I"m glad we got the time to try today. She has dress rehearsals on Thursday and Friday. 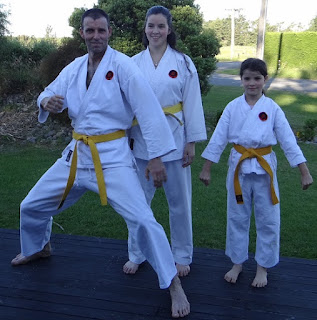 Photos after karate. The only found out this evening that they had earned their yellow belts. Russel had a yellow belt for Hannah to use (our were at home) so because she was the only one with her yellow belt - she was on the right of their line (they line up in belt order). So that was fun for her too. :-) I had bought a couple of packs of belts, so it was great to have the two longer yellow belts for Brendon and Rachel on hand already.

Once the younger two were in bed, these 3 joined me in making cards. Eventually we had a nice little production line going and we got so many made. I was especially glad the children (including Hezekiah) got to make cards to give to their classmates and friends. People always ask "did you make them" and so it's nice for them to say yes. Even if Hezekiah adds "with Mum". 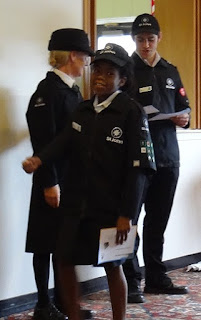 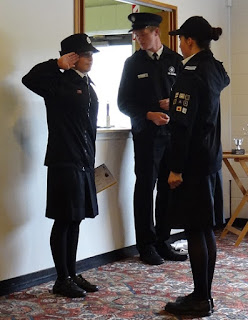 Tuesday 6th: Rachel and Ruth had an extra ballet practice this afternoon, and then we went straight to St John for their year end prize giving.
Both girls received the badges they have been working on over the last couple of months. 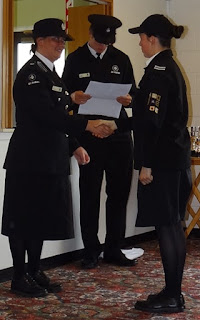 And they also received their "years of service" badges. 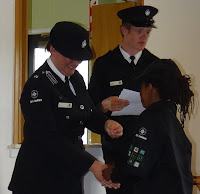 Wednesday 7th: Asher decided she would just get Dad's marble game down herself. I let her get the step, but did help her get it down. 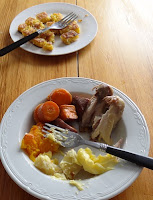 Some of the children were having their IPs at Champion Centre today, so we had the day at home. 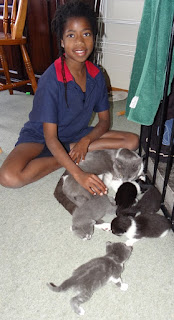 Asher has been on her new meds for a week now. She has not been eating that well at breakfast this week, but today it got really bad. She ate just a couple of pieces of her breakfast and then wasn't even hungry at lunch. Eventually at about 2pm she finally got a bit hungry and had a bit of food. I called the pharmacist to chat about the possibility of the medication being a problem. He said although not common, it is possible. He said it may improve over the next week, and then it may get bad again when her dose is increased. If it doesn't improve though, we will need to call her doctor.
(NOTE: Thankfully she did eat well on Thursday, so we are hoping it's just an adjustment with the medication and not a major side effect as it was with a previous med).

RIGHT: Ruth enjoying the kittens this afternoon.
Little Miss was so loud last night with licking them, that we had to move her and the kittens out of our room and into the dinning room.
Posted by Buckland at 10:00 PM