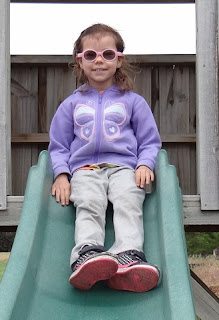 Thursday 8th: The big 40 for me today. And being a Thursday it starts off the busiest day of the week. I normally have Rachel around to help in the mornings, but she heads off to work really early on a Thursday. Thankfully it all went smoothly and we got the 3 middle ones off to school. Asher and I then had a bit of time at home before we headed off to the Medbury play centre for a combined Christmas party with the preschool.
Asher started getting upset when we went past the farm entrance. She is used to us going to fetch Rachel at lunch time, and although we were 2 hours early, she did not understand why I was not going the right place. She started moaning at me as soon as I missed that turn off. When we stopped and I wanted to get her out the car, she was even more upset. It was a real challenge for her with all these new things at once, especially when she had another plan in her head. 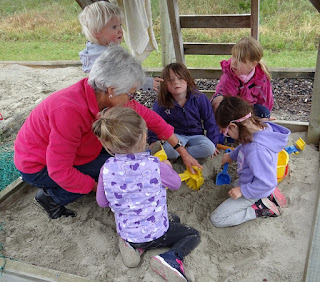 Thankfully the rain stopped for a bit and the slide and sandpit distracted her for a while and she got a bit more comfortable being in this strange place. And having Lynda there at the sandpit also helped her feel more comfortable. She spends so much time with Lynda at preschool. 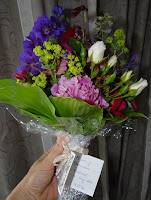 Lynda gave me this lovely bunch of flowers for my birthday. To Mum / Belinda from Asher & Lynda. So sweet. 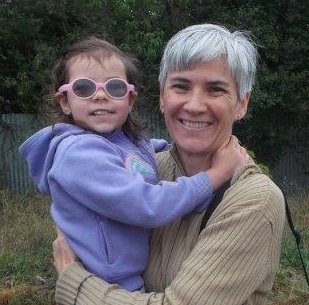 And Lynda took this photo of us. It was nice to have Asher happy and having some fun.
It was getting a bit too wet outside, so we headed in. Asher ate some of the popcorn that I had brought with, and had some water, and then played a little with some of the toys that were around. It wasn't long before she headed outside again though. When Santa arrived, she headed right past him and was heading for the car. 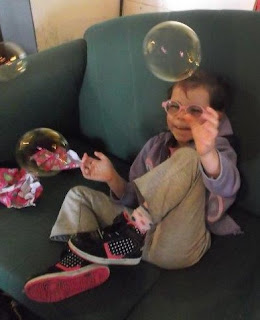 I brought her inside (to her loud protest - sorry to the other mothers and children). Lynda had bought Asher some bubbles and thankfully her gift was very close to the top of the bag. So I took her up to get her gift and unwrapped it as quickly as I could. As soon as the bubbles started, she stopped trying to run out the door. :-) Thanks Lynda for these photos too. 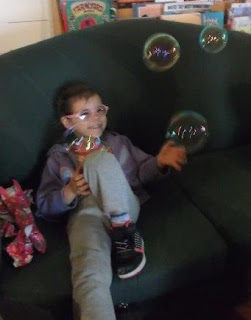 She just loved the bubbles and it calmed her down so quickly. We moved to the kitchen area and had a few other children join in with the bubbles for a while, but Asher didn't last all that long and wanted to leave again. So although we were a bit early, Rachel was already done with work, so Asher finally got what she had been waiting for the whole morning - to fetch Rachel and go back home. :-)
It was a quick rush for Rachel to get ready as we had to leave by 2 to get her to her first dress rehearsal. 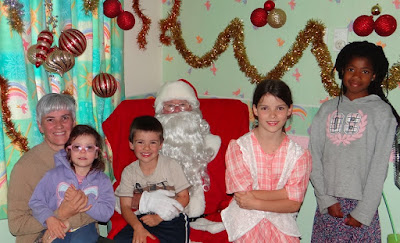 Brendon then brought the rest of the children and they picked me up on the way to the Champion Centre's Christmas party.
They had hoped to practice the opening scene today - with Ruth and Hannah, so we had a bit of a longer stop at the rehearsal that planned. Not long after Brendon arrived with them, Asher started crying. He brought her inside, I took her to the toilet, but nothing we tried calmed her. She just cried and cried. It continued for the rest of the trip to the party and for a while after we arrived. About 45 minutes in total. Rather stressful for me too. Especially when you have no idea what is wrong and how to help. Even bubbles didn't work this time. 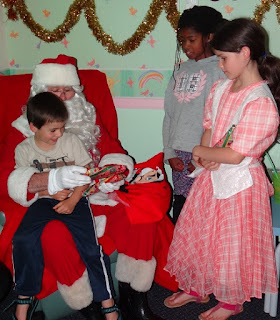 Thankfully she eventually relaxed and the crying stopped. I was especially grateful that the rain had stopped, as she then enjoyed the outdoor equipment - something nice and familiar for her.
We just managed to get Asher to join in for a photo with Santa. She was quickly back out the door playing outside.
I had bought swimming bags for these three and they were all thrilled (nice patterns on the outside and waterproof on the inside). They did need them now that they have swimming at school.
Our kids know Santa is just a fun made up story, and they knew I had bought the presents. They could enjoy the fun of it all though.
The girls were wearing new dresses that I had bought for them. Trade me has again proved really helpful. They don't get many long dresses handed down, so I had to search on Trade Me. I was pleased to get a few for them. 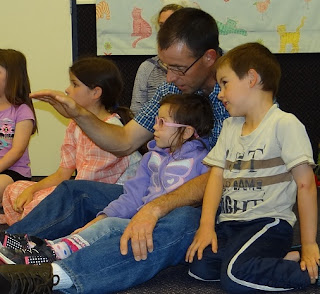 Hannah especially loves dresses. This one was quite a good fit for her too (style wise that is).

They had a music session at the end of the party. At first Asher tried to make a run for it (especially as it was in a different room than normal, had loads more people, and had different people leading). Brendon got her back in though and it was good to see her getting into it. There were a couple of unknown songs, but some she knows too - so that helped. 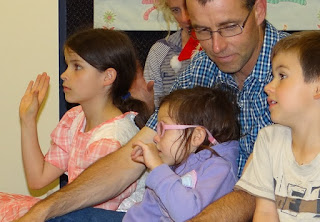 It was great to even see her doing some of the hand actions.
After the party I was dropped off at rehearsals to drive back with Rachel.
Friday 9th: I fetched the girls from school at 1 so that they could get ready and we could leave at 2 for dress rehearsals. All three of them needed to be there today. It started at 3 (in Kaipoi) and went on till after 7. So it was a long afternoon together.

At least Rachel and I had a bit more time to try her hair again this morning while Josie was watching Asher. I was much happier with the results today. I just need to get the curls up higher, and we will go for smaller curls (that big one in the middle is just too big).
Dress rehearsals went well and they are all very excited for the concerts this weekend.
While we were at dress rehearsal, Asher had a 14 minute Tonic seizure (at 6pm). I have asked Brendon to always let me know if she has had a seizure while I am out. This helps me to not wonder the whole time I am away how she is doing (and I would always ask as soon as I walked in if she was ok). So this is really good set up and helps me to relax and just deal with things if and when they happen. It was rather emotional for me this evening though. Brendon told me that he was just about to phone the ambulance when it stopped. It gave me an idea of how intense it must have been for him, and I was sorry he had to go through that.
There was another Christian mum at dress rehearsal, and I asked her to pray for me. I was surprised by my emotions and I was so glad I asked her. She prayed for peace, especially with being away from home. I actually chatted to her about that after her prayer. It was reassuring for me to hear her talking about how much harder it is for us mothers when we are not close. Even though I had not mentioned this, it was what I was feeling and it helped me to know it was a natural response. Blessings through the trial again. And His peace did come, very quickly.
Posted by Buckland at 10:00 PM