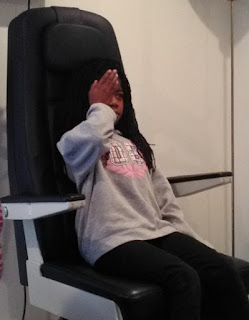 Monday 12th: After dropping Asher and Hezekiah at preschool, Ruth, Hannah and I headed into town for their appointments at the optomotrist. Ruth went first (as Hannah was a little worried about what it was all about).
Ruth was the main reason I made these appointments as her eyes have been hurting her if she reads for longer than a few minutes. Now that she is at school, there is a reading expectation on her and so she has had to do more reading than ever before. I never pushed her to read as I knew she was very capable. I just thought she didn't like it. Over the years I tried to find different books to try and catch her interest, but never manged to find anything. Now I wonder if it was just discomfort all along. She never pushed herself to the point of experiencing the pain she now gets, but it was obviously never really comfortable for her.
The lady explained that it was only Ruth's high intelligence that has allowed her to keep up. Her eyes have to work 45% harder than others to just get the words to focus. Most children would use so much energy (and brain power) to get the words into focus that there would be nothing left for actual learning. So she has done incredible well over the years. I am so pleased we have finally gotten to do this. Having glasses is going to be such a help to her and hopefully she will start enjoying reading now. 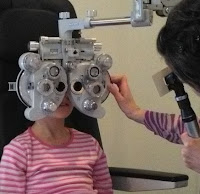 As Ruth's prescription for reading close is so strong, she has suggested getting bifocals so that she can have the proper prescription for distance. Especially in class with looking up and down from her work to the teacher or the board. 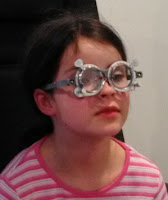 Hannah also needs glasses, but more for helping her eyes to work together. She described it as having 2 cogs that keep slipping past each other. Sometimes they align ok, but then for no reason, they just slip past each other. This may well explain her dyslexic type issues with her (for example: reading "was" as "saw"). I had no idea it could be related to her eyes. So I am again so very pleased we have finally gotten this done for her. I am confident this is also going to be a great help to her with her school work, especially with her spacial awareness in writing. 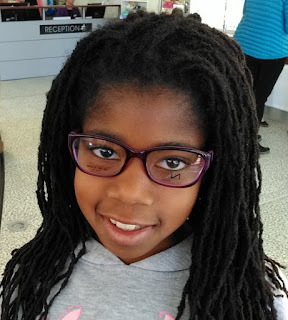 Then it was time to choose frames. Ruth had a great idea to take photos with the sample frames on. :-) They had clear ideas of what they liked and I am so thankful that they are both very excited about getting there glasses (which will take around a week to be ready). And they both look great with them on.

Just as the girls had finalised their choices and the paperwork was all getting done, I got a call from the preschool. Asher was having a seizure. I had told Lynda to call Rachel as she was home, which she did. As it started just before 11:30 (when she goes home), Rachel was just leaving when they called. So instead of going with the pram, she jumped on her bicycle and was there very quickly. The seizure had only been going for 2 or 3 minutes when she got there - so she made good time. Unfortunately it ended up being a long seizure. Lynda got the medication ready and Rachel gave that at 5 minutes. 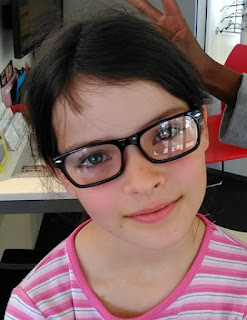 It was still going at 10 minutes and this was when they called me. It was a bit of a shock for me to be thrown into a seizure at 10 minutes. So we have made a change to the "Seizure Action Plan" that if I am not there, they still call me when it starts. Rachel just wanted to check that she must give a 2nd dose of the medication. So I could talk her through just giving it really slowly. They were also not sure as to when they needed to call the ambulance. So I took a minute to just chat to Rachel and she told me she was breathing really well. While we were talking the seizure finally stopped, at around 12 minutes. I was rather emotional but it was great to hear that everyone there was wonderfully calm. I think it helps that there are lots of other little children around that need to see the adults nice and calm and relaxed. Hezekiah was also a great help for the other children as he was just so matter of fact about it all and so they knew they didn't need to get stressed. It was such a blessing for me to know there was so much support through it. 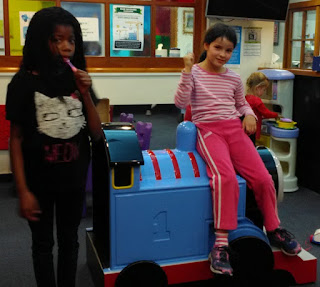 I had asked that they call Brendon and so he was already on the phone while I was talking to Rachel. He came over and signed all the paperwork and took Rachel and Asher (and Rachel's bike) home. Hezekiah was so sweet - before Brendon had arrived he was concerned because Rachel would not be able to take Asher home on her bike.
It helped me to know the girls were home and Brendon had Asher settled before he went back to work.
Then we were off to the hospital for a follow up appointment for Ruth. We got the blood results from last week and her B12 is much improved. Normal range is up to 600 and her was 1,300 last year. It is 770 now, so still high but massively improved. 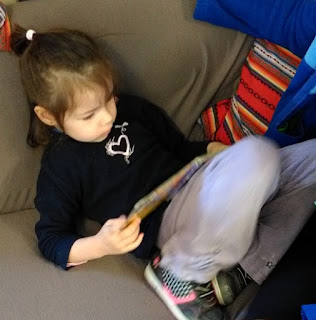 She still has inflammation, having dropped from 17 to 15 but needing to be under 10. Her haemoglobin is still low. So the doctor has suggested we do screening for Thalassemia. I was really impressed with how well he described it to Ruth. He gave so much information and was looking at her the whole time. I really appreciated the time he took and how well he explained it. With her having blood drawn last week, we will wait a bit before she gets this next test done.
Tuesday 13th: For a couple of weeks now I read a book with Asher when we arrive at preschool. When I said "book first" this morning when we arrived, it was great to have her jump up onto the couch next to the books and look through a book. Lynda chatted to her about the animals on the pages. Huge progress here which I am so thankful for. 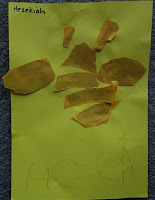 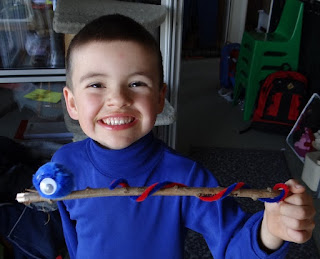 Hezekiah was excited about showing me his bee today.
As well as the caterpillar on the stick. I have so many art photos that I haven't gotten around to posting yet, so perhaps it's better to put them up as they come home. :-) 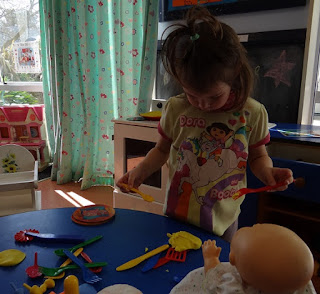 Wednesday 14th: I finally remembered to get a photo at morning tea today. I was upset with myself for not getting a photo during her music session this morning. It was a real breakthrough. Ali has a new big drum (at least 70cm diameter) and the bean bag frogs were out again. Asher wanted to just do the frog song, but when our frogs dropped off our heads, I made mine drop onto the drum. That managed to get Asher's attention and so she eventually started dropping the frogs on the drum. She had a little pattern going with another activity (I can't even remember now 10 days later what it was), alternating with the two games, and either putting the frogs all out onto the drum, or packing them into their basket. 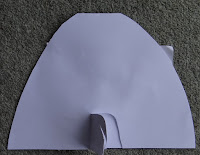 It was the first time Ali had seen Asher using her alternating pattern, and she said she was happy for me to try and guide Asher into creating patterns like this in future.

Thursday 15th: Rachel was so disappointed this morning. She kicked something in the dark when she got up. She hurt her toe so badly that she was not able to go to work. Thankfully it was feeling much better by the evening and she didn't miss out on her ballet practice. 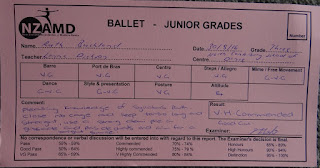 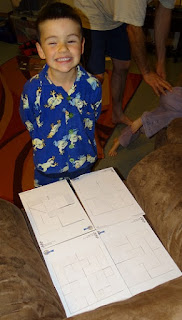 Friday 16th: I was looking for something different for Asher to play with this morning while Josie was here watching her. I found a few correspondence school puzzles from when Ruth was signed up. Hezekiah enjoyed playing with them too. He decided to turn them all upside down and build white puzzles. :-) Saturday 17th: Such a cute photo. Hezekiah was playing on the mini when we got up and Asher went to join him while I made breakfast. I love how he put his blanket over her too. They have done this a few times in the morning and I am always so thankful for this big brother's love. 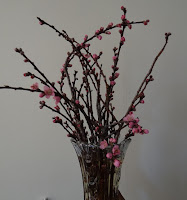 Josie gave us some of her pruning cuts yesterday and I remembered to take a photo this morning. They have already started opening. 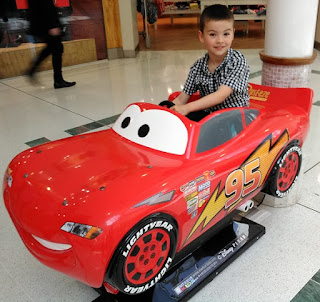 Sunday 18th: Brendon has a bit of flu and so stayed home this morning with Asher. I headed to church with the other 4. We had our lunch in the car as we travelled to a shopping centre to get shoes for Hezekiah. He needs good ones for school and church (his current ones have holes) and only when we were trying them on did I realised how much his feet have grown. He needed some good summer shoes too.
Rachel also needed some summer shoes, so she was pleased to get time to look around and try some on. We don't often get time in town to just "shop" like this. :-) The younger ones enjoyed just sitting in the different rides. They haven't been through this shopping centre before - so it was all new and exciting. :-) 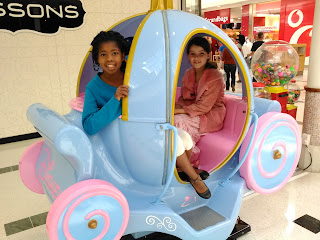 It was a great use of the extra hour we had before needing to drop Rachel off (in town) for "visitations". She is going as a leader on another CEF camp (or Camp Goodnews) in the holidays. Today a few of the leaders go and visit a few of the children who are going on camp to chat to them and their parents. Thankfully Rachel was able to get a lift with friends to their home at the end of their day out, and so I only had a 20 minute drive to pick her up in the evening. She had a great day and enjoyed getting to know some of the "new" leaders.
At 6pm Asher had a 1 minute Tonic Clonic. It started while she was in the bath with Hannah and Hezekiah. Thankfully Hannah was watching her and called as soon as it started. Brendon was sitting at the door reading, so was up and getting her quickly. I heard the call from the other side of the house, so was there with a towel as soon as he had her up. I was so pleased it was a short one. Thankfully she didn't have a properly sleep afterwards, and so could get to bed at normal time.
Posted by Buckland at 10:00 PM