Bikes and a party 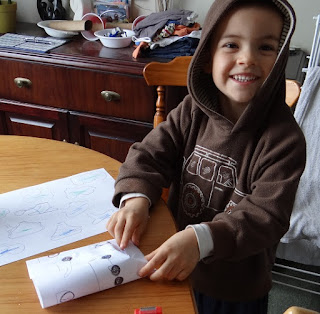 Friday 9th: Hezekiah is so excited about going to a birthday party tomorrow. I had bought some cars (which he thought were wonderful and asked if he could get the same for his birthday) but I forgot to buy wrapping paper. So Hezekiah and I made some this morning with pictures of different vehicles.
The boy is a good friend of Hezekiah and he will miss him at preschool over the next weeks as he will start school next week. Hezekiah will start after the holidays, so it's not too long. 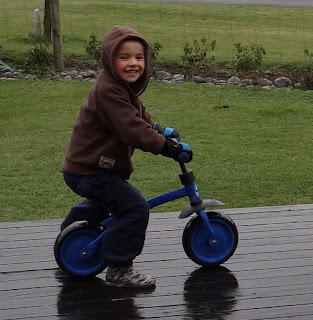 Rain didn't stop Hezekiah enjoying his bike today. I managed to lift the seat a bit - so he wanted to try it out. 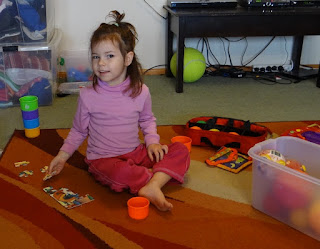 This afternoon Asher was playing with her balls and stacking cups and I brought a 12 piece puzzle into the game too (with no frame). She built it so many times I lost count. :-) 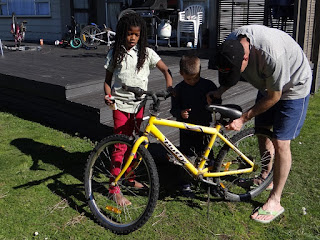 Saturday 10th: Ruth had a slow puncture on her bike and the leak could not be detected. I eventually bought a replacement tube this week but bought the wrong size. I suggested we see if it fits one of the smaller bikes we were given for Hezekiah. While looking through the bikes we were given a while back, we found this yellow bike was no longer too big for Ruth. She was thrilled to be upgraded. She was also more than happy to help clean it up and get it oiled and ready to go. 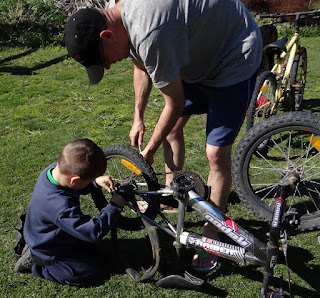 And then Brendon got to work on a bike for Hezekiah. The tube that was in here could possibly be repaired (it was leaking on a previous repair) but it was nice to be able to just put a new tube in. Hezekiah enjoyed "helping". 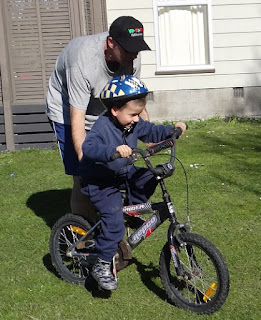 And then it was time to try it out. 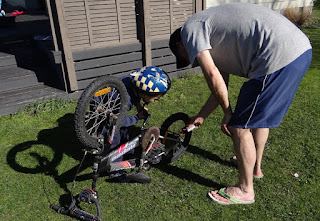 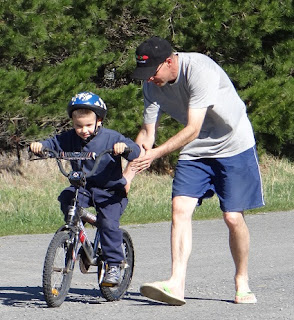 And then they headed out to the road for a little ride. 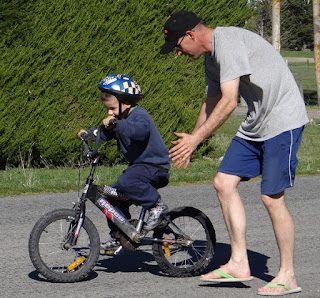 I'm glad I got this photo as Hezekiah was telling Dad to "let go". So at least I could show him that Dad did in fact let go for a bit. He is still a way off riding on his own, but with regular practice it won't take long. He spends ages on the balance bikes at preschool. I think the challenge now is getting used to the big bike. The balance bikes are bigger than his own one, but they are still a load smaller than this bike. The handle bars are possibly a bit too high, but we could not work out how to drop them. I'm sure he will adjust to it soon. 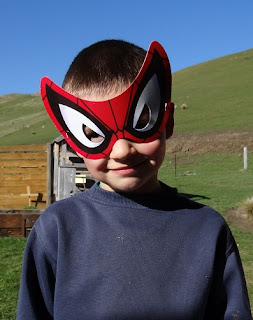 And then Hezekiah and I headed off to the party. He was thrilled with the spider man masks that they children all got.

And then they headed off for a treasure hunt. And what a stunning day. Yes, that is still snow from this week. They even had some snow in the flower beds around the house. 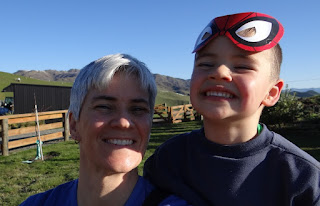 Although it's not a normal "parent child outing" it was still a special time together. Their drive way is really steep and the excitement of going up it was part of the enjoyment of the day. 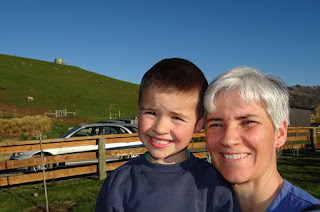 We had a lovely afternoon. 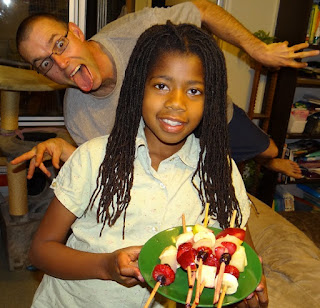 Ruth had asked about what food was at the party and I told her about the fruit kebabs. So Ruth made fruit kebabs this evening. She specifically told Hannah to move from behind her - so Brendon purposefully photo bombed her. :-)

She was not impressed - so she asked me to take another photo (below). :-) 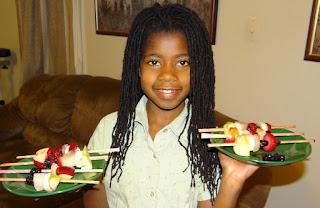 Sunday 11th: Asher had a 1 minute Tonic Clonic just before church finished today. She had been playing outside and Brendon noticed that she had gotten quiet and was heading inside - up the 2 steps. I am so thankful he was aware of the change because the seizure started as she was going up the steps and he was quick enough to catch her so she didn't get hurt.

On the whole it was a hard day for me today. I got lazy with taking my supplements over the weekend and suffered because of that.
Posted by Buckland at 10:00 PM