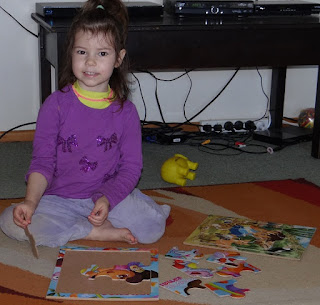 Monday 5th: I have bought a few new puzzles for Asher and she has taken to them really quickly. These are only 9 pieces, but she has actually been happy for me to leave them in amongst her other wooden puzzles - so that is a great step forward. She sat and did these two over and over again this afternoon. 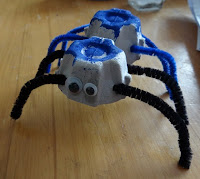 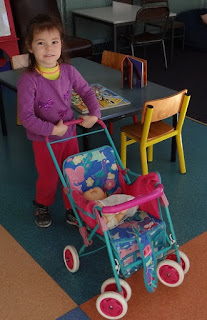 Wednesday 7th: A pram was brought from the other play room for Asher today and she just loved pushing her "baby" around. Such a comforting activity for her and one that she does every day at preschool.

She had a great time outside with Mariana today and enjoyed using the scooter.
After Champion Centre I headed to a dentist to get Asher's front tooth checked and to get all the ACC forms sorted out. When she fell with her seizure in July, she fell onto her face and we can see now that it has damaged one of her front teeth (the tooth is off colour). I was very relieved to learn today that sometimes baby teeth will go white again after a bump. So it has not necessarily totally damaged the nerve. The tooth may not "die" and go black. I do pray that this is the case. 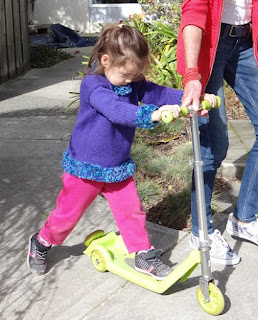 At least the outcome of the visit had something positive. The rest of the experience was a nightmare. We arrived about 5 minutes early and they were running about 10 minutes late. Those 15 minutes were some of the hardest I have had to deal with. I had told them when I booked that Asher was autistic, but I should have made it clear when we arrived. They had a flight of stairs right next to the reception and a rule that children are not allowed on the stairs (I tried twice with her and was very clearly told off). Asher loves stairs. She got totally beside herself because she was not allowed up. No amount of screaming or crying was going to get them to change their rule. I had already used all the toys I had with to entertain her to keep her distracted while I filled out the forms - and then I just had nothing left to try. It was emotionally exhausting. At one point she tried to push past me to get to the stairs and then hit her head in their very sharp hand rail. 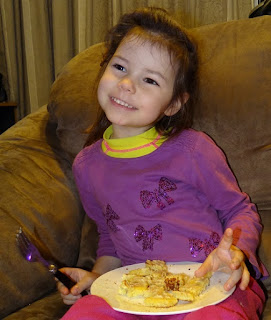 I had explained that the stairs were the only thing that would help her calm down, but there was no compromise. When we finally got to the dentist both Asher and I were crying. Thankfully the dentist was very kind and managed to have a quick look at the tooth and gums (with Asher on my lap). We were not able to get a photo as hoped, but at least we got the paperwork done. In a worse case the nerve could be damaged for the adult tooth - which would mean the need for a root canal or other major work - which will all be covered by this ACC claim - even if it's in 15 years time.
Thankfully Asher enjoyed some hot chips on the trip home and although later than normal, we had a good trip home. As I was putting her into bed at 2pm, she had a 1 min vacant seizure. It felt like ages since she has had one of these and when I checked it has indeed been almost 2 months. Thankfully it was really short and she looked fine when it stopped.

The afternoon also saw Ruth going for some blood tests. She has a follow up appointment at the hospital on Monday, so I managed to get hold of the doctor and ask if we could get some bloods done this week so that we have the results to look at when we see him. 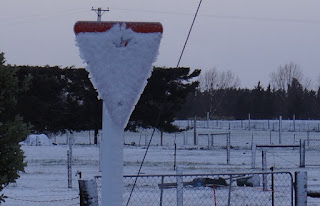 He agreed that it was a good idea, so we were thankful we could get it done. The courier arrives at 4pm, and just after we arrived an emergency patient arrived and so we only just got to see the nurse in time.
Thursday 8th: There was a bit of snow overnight and so the children had the wonderful excitement of waking up to see a white garden. I hadn't even told Hannah that it may snow - so she got a very big surprise. 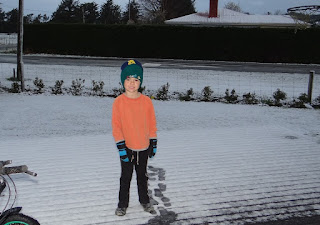 It didn't take Hezekiah long to head out.
The girls also got out for a bit but had to still get ready for school. Although there was more snow expected through the day, it was not a problem on the roads (other than a few families way up in the mountains). Ruth was looking forward to the experience of being at school while it was snowing. It didn't work out as well as she hoped though, as they spent the whole day indoors. Hannah was pleased though, as that meant they got to watch movies (during the break times as they were all kept in). 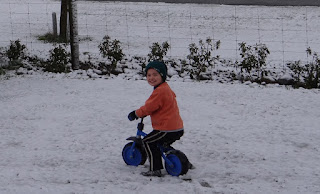 On Tuesday evening I picked up this bike for Hezekiah (his birthday present from Nana). It was smaller than I had thought though, so decided to rather give it to him straight away. H has already been enjoying it so much. He used it to go to preschool on Wednesday (with Rachel) and even though way too small, it's still much faster than walking. :-) Since this photo was taken I have raised the seat - so it is better. 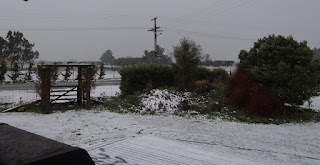 What I really like about it (over the wooden balance bikes) is that the wheals are so wide.
Great for riding around the garden. And Asher will get good use out of it too in time.
LEFT: I took this photo at 9 am when another wave of snow came through. It was lovely to watch.
BELOW: I took a short video too of one of the waves. We also got loads of tiny hail through the day too. The grass didn't stay white though as there was just too much warmth (at 4 degrees). :-)

Rachel worked this morning and although she has worked in rain before, she said it was her first ever time to work in snow, hail and high winds. All in one day. 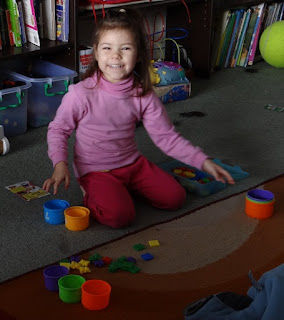 Asher loved playing with her stacking cups and shapes this morning. She would have them all in their colour groups next her and then one by one (alternating with putting shapes back in their container) she would place the big ones into each other and the little ones next to each other. Then it was done in reverse.
Later I showed her that the little ones could stack into each other too - so she adjusted the game. I was glad she allowed me to show her - as she was tempted to resist when I came near.

There was much excitement for Rachel this evening at ballet as the roles in the production have been set. They knew they were doing Peter Pan this year, and Rachel was THRILLED to learn that she is Wendy!!! Ruth was also pleased as she was asked to join the big girls in one of their dances. Hannah has started doing Jazz again (and Ruth has started up with her Jazz too now that her ballet exam is over).
Posted by Buckland at 10:00 PM