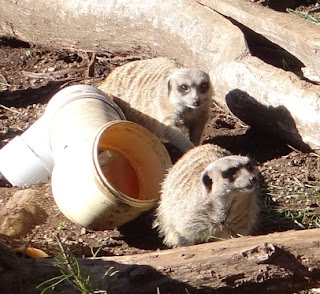 The park opens at 10 and although our goal was to arrive as it opened, we were pleased that we made it in time for the first feeding at 10:45. The meerkats and porcupine.
Asher heard "cat" at the end of meerkat and so proceeded to say "meow" a few times. She did enjoy watching them. 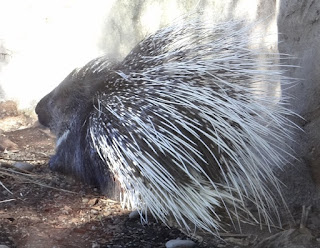 The park was very busy today with it being the last week of holidays (and the kidsfest special with 2 free child entries with every adult), so we didn't get to see the porcupine nicely when fed. He wondered off to the pack of their area though, and so we got to see him nicely through the glass. Not the best of photos - but still enough to see how big he was. 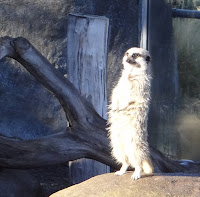 The meerkats really are cute. They were one of Hannah's favourite of the day. 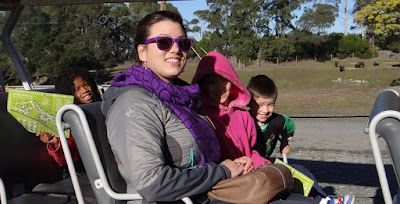 The pram could not go on the shuttle, so Vanille took the other 3 on for a ride around the park. We were heading to the next feeding which was not far from the entrance - at the end of the shuttle ride. So it was great that they got a good "overview" of the whole park. 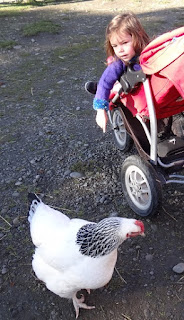 It wasn't a far walk for Asher and I, so we stopped in at the farmyard area on our way. I took this photo and then put the camera away and took her out the pram. She had a great time running around and looking at the different animals.
The Champion Centre had suggested we get a Kiwiable card for Asher which allows her and/or her carer to get a discount at various places around the city. This was our first time to use it and it was really appreciated. Asher was free (being under 5) but I only had to pay half price for my entry. I realised today how justified this is. I could not fully enjoy the time as I needed to be watching her so closely and it took a lot of effort. It was worth it though and she really did enjoy it. I just don't have anywhere near as many photos as I would have had. :-) 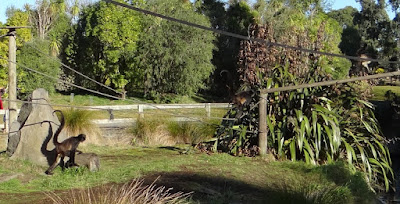 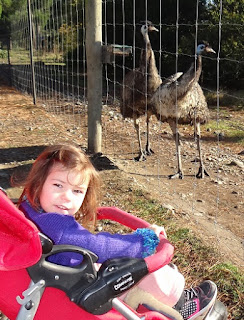 We got to the next feeding area (the spider monkeys) really early and I knew the shuttle would take a while to get around the park. So we just wandered around while we waited for them. 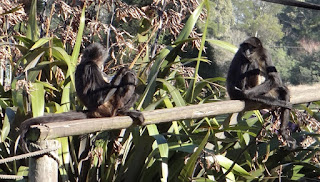 The others arrived with a few minutes to wait before the feeding time. We did learn a bit about the monkeys but I don't know that it was worth being there with all the crowds. 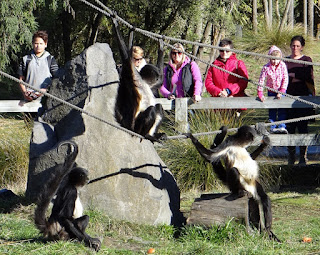 The monkeys were not terribly hungry either. :-) They were fun to watch though. 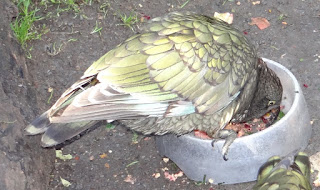 We had missed the kea feeding which was just before the monkeys. We decided to just head through their aviary though and I am so glad we did. We were the only ones in there and they were still eating. So we got to see them nice and close. 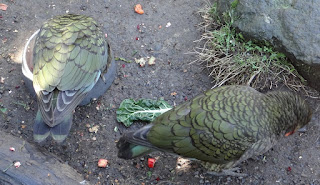 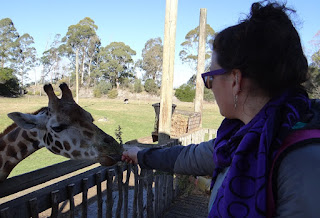 Then we headed down to the giraffes. This was the one feeding we did NOT want to miss. It was the one experience we wanted Vanille to have, as well as Hezekiah (although Hannah doesn't remember our previous visits as they were that long ago). 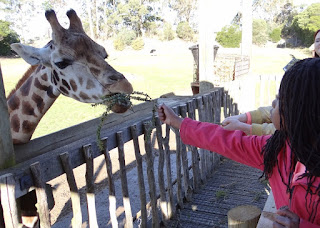 We had a very long wait and they mentioned that there was no guarantee the giraffes would want to eat. Just before we were next, one of them walked off. So out of 3, there was just 1 left wanting any food. 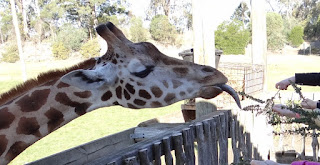 So we were really thankful that this one was happy to put on a show for us. :-) Just look at that long tongue. 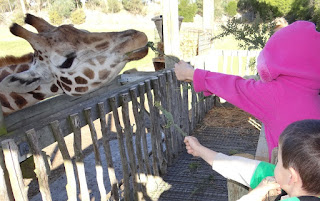 Hannah with her hood on and Hezekiah waiting patiently for his turn. 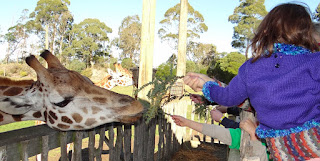 Ruth took the camera and got the next couple of photos with me helping Asher and Hezekiah.

At first I wasn't holding tightly enough and we got jerked forward. 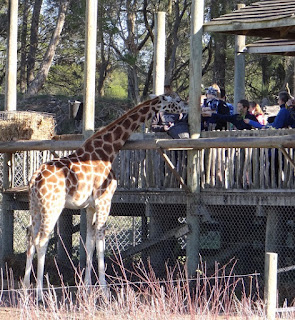 Then we headed off for our picnic lunch. I took this photo on our way so that you can have an idea of the set up for feeding. 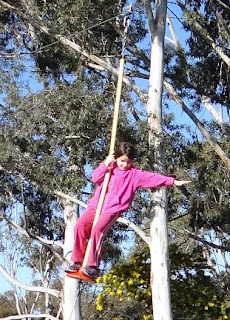 Once lunch was finished the kids enjoyed some time at the park. It's all new since we last came. 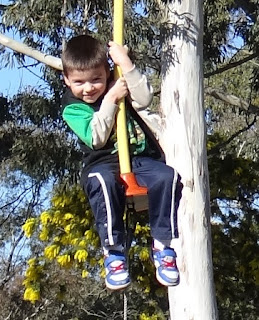 Little monkey.
We then headed to the farmyard as they had feeding time there at 1pm. It ended up so busy with everyone else there though, that we didn't stay for it all.

Next we headed to the Kiwis. Their feeding time was next, but we decided to just go in earlier. Again, it was so much nicer with it being so quiet (no one else in with us) and we got a lovely viewing with them coming right up to the side of their enclosure where the glass is.
The kiwi house is kept dark during the day, so that the kiwis think it's night time and are awake. So we were not able to take any photos (no flash allowed). I was pleased to hear Hezekiah explaining it to Dad later and telling him that at night time (when we are sleeping) they turn on the lights so that the kiwis think it's day time and they go to sleep too. :-) 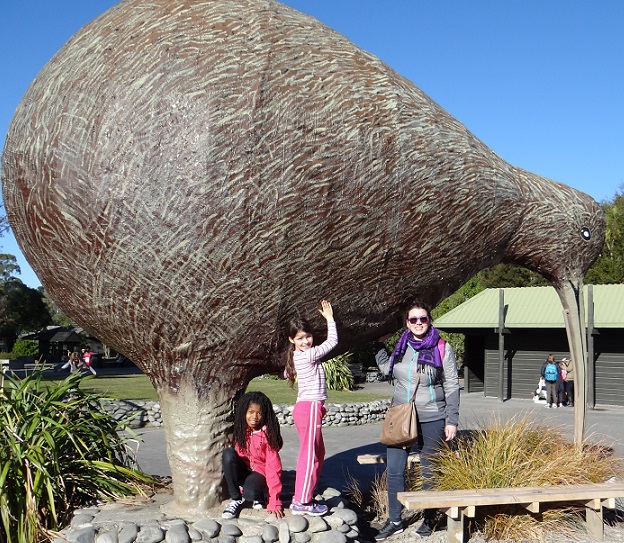 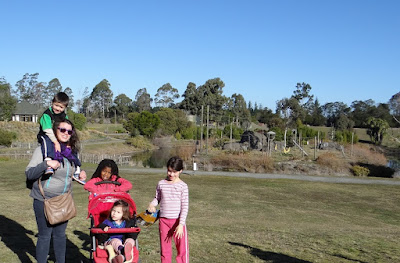 Asher was starting to get tired and there were no other feeding times that we specifically wanted to get to. The girls however really wanted to go and see the gorillas. So we headed off for a walk to them.
I should have asked people who were walking past to take a photo with me in too. I only realised when I loaded the photos later that I wasn't really in any of them (other than my arm at the giraffes). :-) 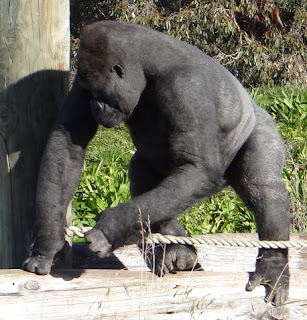 It was a bit of a walk and Hezekiah got rather tired. The front tire on the pram wasn't fully pumped up, so I couldn't give him a ride on the front either. Thankfully Vanille offered to give him a ride which was a great help.

We enjoyed watching the gorillas inside but I didn't take any photos through the glass. Thankfully we timed it well for going outside as this big guy got up while we were watching and headed inside. 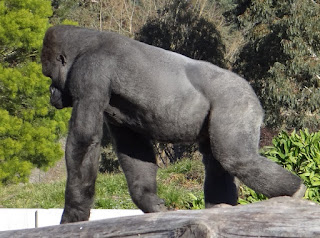 It was lovely to watch him walking and to get some nice photos of him too. 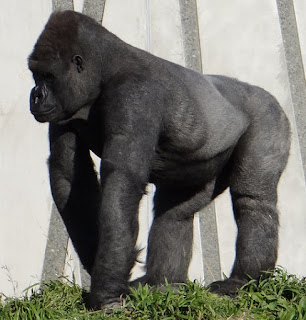 Such a big guy.
We had a great day and I am so glad we got to go and had such wonderful weather too. Many special memories made today.
Posted by Buckland at 10:00 PM