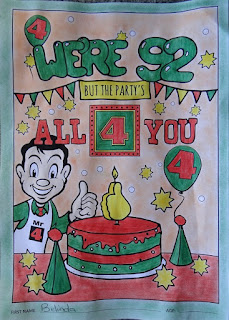 Friday 22nd: I finally got my entry done for the colouring in competition. With a mini iPad up for grabs I could not resist. It would be such a great tool for Asher. 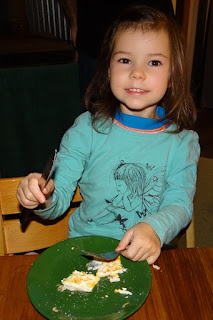 It was a very exciting day for Vanille as she bought a car today. It's her very first car - so a really special day. It was wonderful how it all worked out as she bought it from another French HelpX who she met on Sunday when we dropped Rachel at camp. He is leaving NZ in the next couple of days and he sold the car at a great price with a load of things included (like blow up mattress, tent, gas bottle ect). So we were really excited for her.
Brendon had hurt his neck last week and although the first appointment at the osteopath was a great help, he did need a second treatment. I slept skew earlier in the week and also had a very sore neck and back. So we both headed off for a joined appointment (we share the 30 minute booking between the two of us) and we both felt so much better when we left. It was great that we could leave Vanille and Ruth at home with the younger 2. It was not only nice to get our necks feeling better, it was also nice to just have the time out with just the two of us. 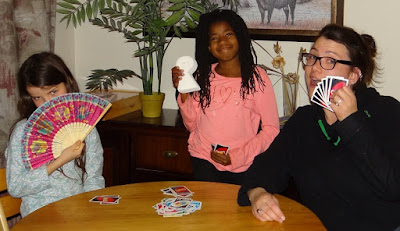 ABOVE: We had to smile at Asher this evening when she wanted to eat her egg with a knife and fork. She did really well too. 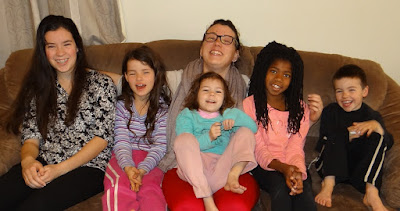 LEFT: And the last night of card games for Hannah and Vanille as she heads off tomorrow morning. Ruth has joined in a bit over the weeks and so joined in with this last game. Hannah really made the most of Vanille's willingness to play though and has really enjoyed her visit. I was especially glad about this as Hannah gave up her room for Vanille while she was here.
Brendon headed off to fetch Rachel after her camp. They only got back just before 10pm. She had a great camp and was so pleased to be able to spend this last evening with the other leaders.
Saturday 23rd: A group photo of the children with Vanille before she left.

Ruth also made her a little gift and wrote her a lovely letter wishing her well for her travels. 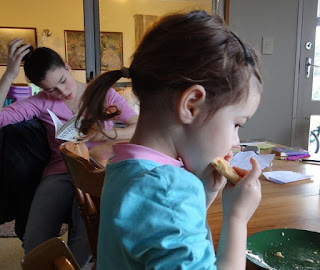 We were all pleased to have Rachel back and especially thankful when she made waffles this morning. Asher decided to taste the one that I was eating and ended up eating her own one. Previously she showed no interest at all (even when we tried to encourage her to give it a try), so Brendon was quite surprised to see her eating one when he got home. I had to take a photo of the cute hair style. Thankfully she left the pony in (which helped keep the hair away from the maple syrup). 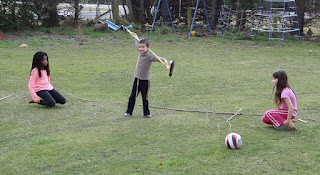 I eventually got a photo of these three in the afternoon. They spend ages out there playing all different games and having so much fun. 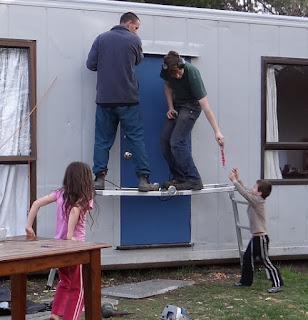 They especially liked being outside because Tobias came over to help with the container door. First it had to be taken off, hinges removed, a few mm taken off that side, hinges put back on, and re-installed. It had been swelling so much (despite being sealed) that it would be very difficult to close most days. So it was great to have it finally closing.

Then he cut strips of the "off cuts" of metal that had been cut out for the windows and he made lovely covers for the sides and a special one with a fold for the top. 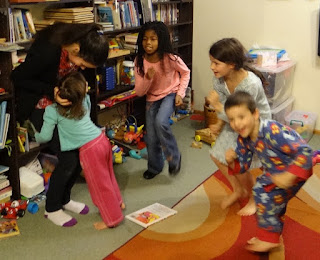 These were pop riveted into place and Hannah and Hezekiah took turns taking the pop rivet tool from them and placing the next rivet in for them. It looks SO good now and we are so grateful for Tobias' help with this.
Sunday 24th: It was lovely that Rachel knew more of the youth from church this week because of all the time they spend together at the camp. It has helped her to feel more part of their group.
We had a nice quiet afternoon and this evening Rachel taught the others a song from camp. 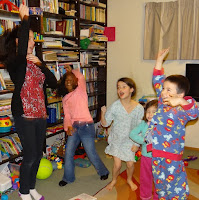 She had sung it to them in the car driving home from church, but it was nice this evening to have the room to do all the fun actions too. 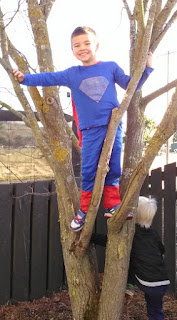 Monday 25th: And just like that the holidays are over. Back to school and preschool for the younger 4 and back to the grind for Rachel. She is not only planning on finishing her school year early (as she wants to spend November doing a Novel Writing challenge) but she also wants to re-write her first novel for a competition that closes in a couple of weeks. So she is going to be rather busy over the next few weeks.

I enjoyed having the 3 hours at home without Asher while she was at preschool. It felt quite strange after 2 week holiday to have that time. 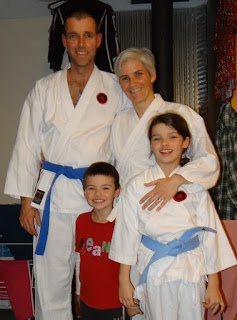 I had enough to do today, as I needed to get ahead with bread making and ended up making three loaves today.
The children where quite surprised this evening when I put Rachel's gi on for karate. She is still off her ankle so will be missing a couple of weeks still. After our osteopath appointment on Friday night I got thinking. Brendon used to always click so easily. On Friday however, it was a total opposite. He only had one good click (the only one that was needed to get him feeling good) but I clicked so many times and so easily. Afterwards Brendon commented that since starting karate his core is so much stronger that his muscles are just holding the spine better - so he can't click as easily (and therefore they don't go out as easily either). So it got us chatting and thinking about how to try and make a plan for me to get to karate at least once a week too. We are not sure exactly how it will work in the weeks ahead, but tonight was a trial for me and I think that I will enjoy it. I think it's always easier to do exercise that you are "signed up" for and have to go to. It just helps you to remember and get to it. I have had a desire to get walking and get fit, but the reality of daily life has just been too hard to get the routine going (especially during winter). So watch this space. :-)
Posted by Buckland at 10:00 PM