Camp, cupboards, friends and a fall 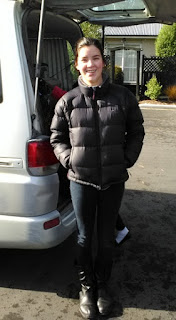 Sunday 17th: On our way home from church we dropped Rachel off at the CEF Camp (now called Camp Goodnews). 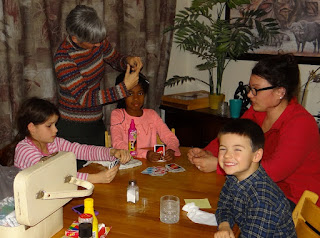 I started with Ruth's hair the other day, so I'm trying to get a bit done every night. This evening I got some done while they played cards.
The children decided that we should all sit on the same chair this evening for prayer time. Vanille offered to take a photo as the kids thought this was so much fun. :-) 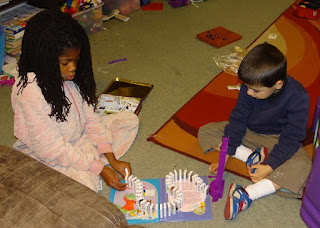 Monday 18th: Dominoes early this morning (before Ruth had even changed). Today is our "quiet" day for the week as it's going to be a rather full one. 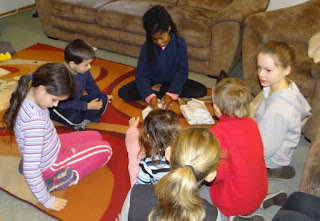 Tuesday 19th: Happy real 10th Birthday Ruth. Two of her friends could not make it to her birthday, so they organised to visit today instead. It was really special to have hours of fun with them today as well as being blessed with more lovely presents. They had a great time and I was sorry I didn't get any photos.
David and Hezekiah played so nicely together and they were rather upset when he had to leave with his mum just before lunch. The older girls stayed a bit longer, joined us for lunch and then I dropped them off on our way to town in the afternoon. 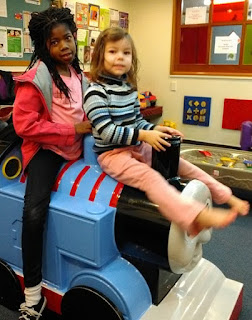 Ruth joined me to help with Asher during the appointment. We had all the plans of getting a high chair so that she could sit and play with all her fine motor "church" toys. They ended up not being needed though. Although Ruth was still a great help. 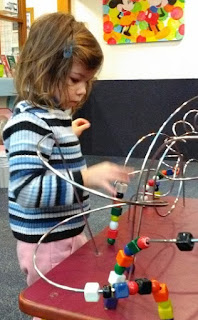 Asher had a great time playing and then decided to run up and down the corridor again (she did this last time we were here too). She ran so many times that I lost count.
Eventually she was even tired and so she headed back to Thomas the Train. It's opened in the back and she would get in and out and have so much fun. At one point she was holding onto the frame and leaning in, when a seizure hit. It was thankfully only a 1 minute Tonic Clonic, but with it happening at that exact moment, she had a nasty fall onto the wooden frame. So she had a bleeding nose and mouth. Thankfully the recovery position that I had put her in allowed all the blood to flow out and so she didn't choke at all. I was so thankful that the bleeding stopped so quickly (as well as the seizure). 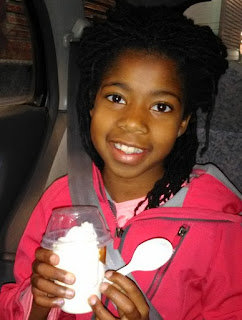 There were a few nurses who came running and they called a doctor too. There was nothing they could really do though, and the doc just confirmed that she was breathing well and that all the blood had obviously come out that it wasn't a choking hazard. Someone had a look at her mouth to make sure it wasn't a bad cut - but I knew it wasn't as the bleeding had stopped so quickly. Just at that point her doc was available and so we went into his room and I could put her on the bed to sleep while I got to wash the blood off my hands. Unfortunately she didn't sleep for a good hour and became quite restless. So the appointment was rather difficult again, trying to keep her calm as well as communicate with the doctor. Ruth did her best to help but it was a rather challenging situation as Asher just wanted to leave.
We left home just after 1:30 and we only left the hospital at 4:30. With the extra afternoon traffic and the fact that we had a couple of stops to make on the way home, it was nice to be able to treat Ruth to an ice cream and Asher and I had some hot chips. That ended up being Asher's dinner as we only got home after 7pm. It will be a very memorable birthday for sure. :-) 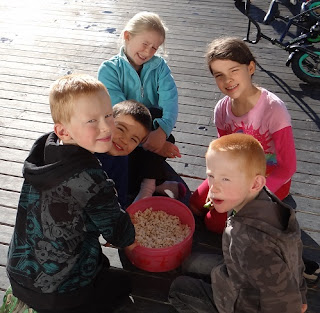 Wednesday 20th: It was lovely to have Kerry come and visit today with her youngest 3. Hannah and Hezekiah especially had a great time playing with them. 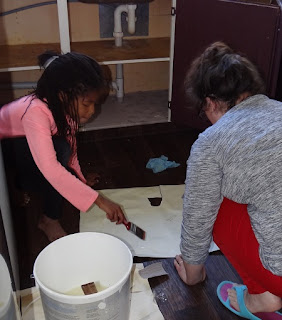 Ruth spent a bit of time helping Vanille with the kitchen cupboards. Kerry also helped watch Asher for little stretches when they needed my help in the kitchen. All the cupboards had to be unpacked, then all the paper (that Vanille had cut during the week) taken out (and marked so we didn't mix them up). The cupboards themselves then got one type of glue on which sat for 10 minutes. Then the paper got another type of glue on and they got put in. What a big job and one that I have been hoping to do for years. So good to finally have it done. Other than getting some basic breakables in from the kitchen counters so that we had space to make lunch, I took my time in the afternoon to pack things back. I had a bit of sorting to do and rearranging so that things were easier to get to. It's those nasty corner cupboards that make it so tricky. It all looks so good though and there seems to be so much more space now that I have cleared a few unused things out. :-)
Lunch on the deck for the kids (as the dinning room table was still loaded from stuff from the cupboards.) Joshua has just turned 6 but it sounds like he will stay in Whero class till the end of the year. I really do hope this is the case as Hezekiah is so looking forward to starting school in October so that he can be with Joshua. So it will be nice if they can at least have a couple of months together.