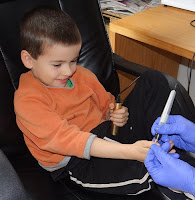 Hannah and I had our follow up EAV testing today, and I organised for Hezekiah to come too. He was the only one who hadn't been tested and he kept asking when it was his turn. :-) So because he was so excited about it, I thought I would finally take some photos so that you can understand a little about how this testing is done. You hold the one rod in your hand while she works on the opposite hand or foot. Different points in your hands and feet relate to different parts of your body. This is known in many practices - like reflexology, acupuncture and even just pressure points that people use to relieve headaches or nausea. This gives her an idea of what areas of the body are out of balance. The skin is also involved in the readings, and so she wears gloves so that her body doesn't interfere with the readings. 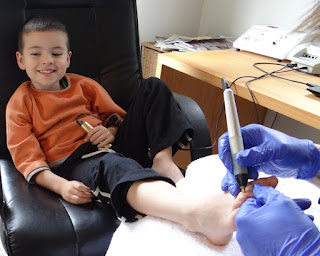 There are a lot of negative things written about this testing on-line, claiming that it's all just a scam. Thankfully Brendon and I have a close Christian friend who has been using one of these machines for over 15 years, successfully helping many people. He had been giving me advice through our FAILSAFE journey and when I was at a point of not knowing what to do next, he had suggested we try and find someone who could do EAV testing. It was just weeks later that a local friend told me about Megan, so I felt confident that this was the right next step for us. And every time someone in the family sees her, I get more confirmation of how accurate the testing is (and I will give more details on that later - for those who are sceptical). 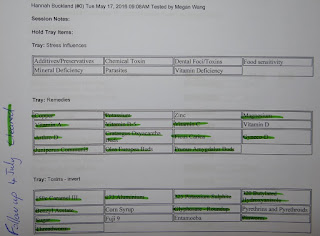 Once the basic body assessment is done, then she is able to test on just one of your big toes. Here she tests for many things like toxins, additives, mineral and vitamin deficiency, parasites, viral infections, radiation, food sensitivity and a few other general areas that come up for each individual. One or two remedies are then made up to help deal with all these issues.
This document is Hannah's first assessment of these general areas (she had 2 remedies, one for each big section). When we had the follow up today we were so pleased to see almost all of the issues had been cleared. I highlighted in green all the items that are now clear. The only ones left are deficiencies in Zinc and Vitamin D as well as some other things that we need to clear out (like corn syrup and a parasite). Because so many things had been dealt with, Megan could work today and doing more healing in Hannah's gut - the main area in her body that is out of balance. So her new remedy has those few items in it again, as well as a few new ones specifically for her stomach and digestive track (so only one remedy needed). 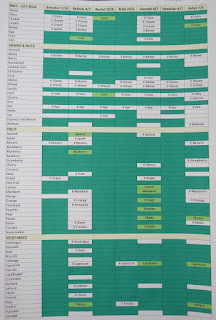 Each personal remedy is tested to that person to find the ideal number of drops (ranging in our family between 2 and 6 drops) and ideal number of weeks to be on them (ranging in our family from 3 to 5 weeks). Then you wait for at least 2 weeks before having a follow up. So we will have a few more follow up appointments in August (Rachel and Hezekiah not even needing them).
From how well Hannah has been doing this last month I am feeling so very positive about this being the way forward for us. The FAILSAFE diet got us "symptom" free, but the diet is so very restrictive and we are all desperate for change. It is also not necessarily helping the body to heal, so now I feel we are actually moving forward.
Posted by Buckland at 3:00 PM