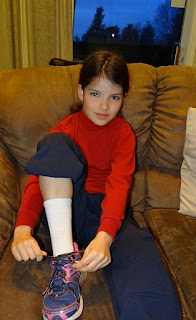 Monday 27th: Hannah unfortunately destroyed her previous set of sneakers (using the toes to slow herself down on her bike) so she had to use a spare pare that we had. She was very upset about having to use them on Friday (when I insisted she not wear the ones with holes to the theatre) as they have laces (where the broken ones are just Velcro). So I was really surprised when she put them on this morning. I was expecting to hear her call me to help her with the laces, but she called to show me that she had done it herself. So she just needed the opportunity to just get down and do it. Well done Hannah. Brendon has been teaching her how to tie shoelaces for years, and it finally just happened.

Lynda wasn't able to be at preschool with Asher today, so I went down with her for a couple of hours. It was nice for her to get some time playing there again. She has missed so much over the last 2 weeks from being ill.
After lunch it was Dental Nurse check up time for the middle three. Thankfully she is getting really used to me saying "no" to fluoride treatment and fillings. Hannah has actually had a previous filling fall out. They would naturally want to re-do it, but as it's not causing her any discomfort and it's nice and clean, I said we would rather leave it. Thankfully it's on baby teeth, so eventually it won't be an issue at all. 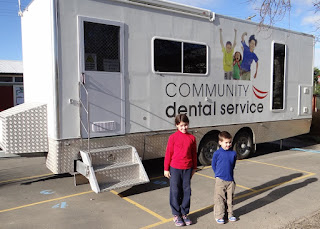 Ruth was the only one I allowed to have x-rays again this year, as she had the most issues last year. Most issues are between teeth and although there was a bit of deterioration on a couple of them, we have also decided to rather wait and see. They are also all baby teeth, and the dental nurse even pointed out that the one tooth would be out by next year, so she would not even worry about doing any work on it.
With the diet changes we have made over the last few years (cutting sugar and then wheat as well as most processed foods) I am confident the adult teeth will all be much better. I also feel confident that Hezekiah and Asher won't even have any of these issues with their baby teeth. 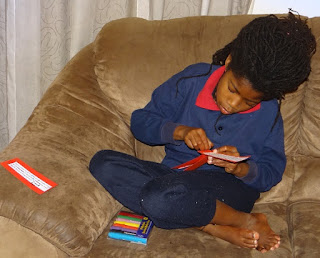 Last week the girls had speeches to do at school. We were really impressed with both girls work and got the exciting news today that Ruth had made it into the finals. Her cards had gotten rather worn though, so I helped her make some new ones this evening and she got some extra practice in. Well done Ruth. We are very proud of you.
Tuesday 28th: I'm really having to get used to plans changing. The original plan for today was that I would get to join the children for a parents morning tea at preschool. Lynda couldn't make it again today, so I planned to just head down a bit later than normal and enjoy a couple of hours there with Asher as we did yesterday. We were not even there for half an hour though, when Hezekiah looked at me and said "I feel sick". He had been perfectly fine up to that point. I quickly took him to the toilet, but he just said he feels like he might vomit, so he needs to go home. So we missed morning tea and headed home. As soon as we got home he took his lunchbox and started eating. I then noticed that he had left without eating his breakfast that morning. So I wonder if he was just hungry. His stomach did seem to worry him a bit through the day though, so it was good for him to just be able to relax at home. 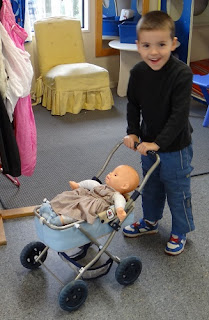 One good thing from our time at preschool this morning (even if so very short) was with the prams. Asher loves pushing a pram around the room - especially when she would rather be outside and it's too cold, frosty or wet out. Yesterday she did a number of "laps" and she started again his morning. I had brought a pram over for her and when she turned it around to start walking, I noticed that she only goes the one way around. So I tried to encourage her to go the other way. She would have nothing to do with that. So I grabbed the 2nd pram and started walking the other way around. I called her when we passed and said "come Asher, follow me" and it worked. So I enlisted Hezekiah's help and got him to go around with her a few times. It may sound like something so simple, but for me it's really wonderful to see Asher able to adjust like this. 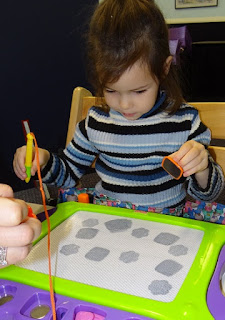 Although Rachel couldn't do ballet this afternoon, we still headed off as soon as Brendon got home. Rachel and Ruth got to do some St John competition training before their division meeting started. Ruth was so pleased to be able to join them and they both learnt a lot. Rachel feels a lot better now about the competition in August.
Wednesday 29th: Thankfully everyone was healthy this morning, so we didn't need to make last minute changes again. It was nice to get Asher back to Champion Centre after missing two weeks.
She had so much fun with Jackie this morning creating a new game. They took turns stamping. After this I even joined in and we took turns between the 3 of us. 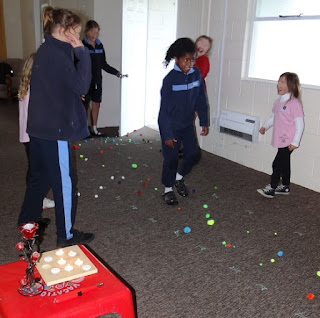 For different reasons Ruth missed the last two weeks of Guides. During that time we also finally made the decision that Ruth will continue attending the local school. So we also made the decision that it is just too busy for Ruth to attend Guides every week too. So today was her last official day as a member of the local group. She will now be transferred to the Aotearoa Region (which is like correspondence Guiding) and we will see if that works for Ruth. She will still be able to attend any special events that the local group have on (they will be her buddy unit) and she is looking forward to joining them for a camp later this year. 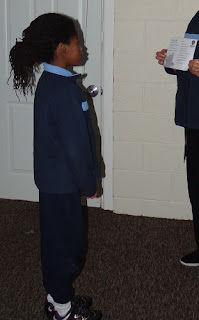 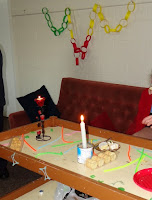 The girls planned a surprise party for Ruth. She had to re-say her promise as a Guide and had missed the previously planned events, so they made a special plan for her for today so that they could also have a farewell party for her.
They were to so much trouble decorating things and had a lovely afternoon together. 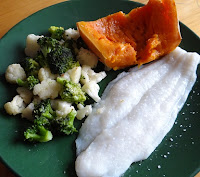 Thursday 30th: A normal Thursday today except for lunch. I was pleased to be able to have Hezekiah's help a little this morning while I got lunch ready. Rachel works on a Thursday morning, so it's always a bit tricky to prepare lunch as Asher needs to be watched all the time. I decided to just bake the fish, and it worked really well. I took a photo of my plate as I was just thrilled with eating all these foods. Food that I have had to avoid for 10 months now. The big challenge for me now is to take it slowly as we start re-introducing foods. I have already suffered twice from having bad reactions. 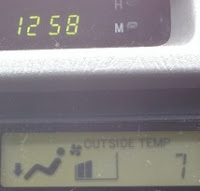 So even though the EAV testing shows that I should be fine with certain foods - I do still react to some of them. So I need to take it slowly. Which is really hard when it's such amazingly healthy delicious food.
I took the photo of the temperature when we fetched Rachel from work. It actually got colder through the morning. Rachel's toes were numb when I collected her, and she said the wind through the morning was really icy.
Saturday 2nd July: I had a much too hard day yesterday to even think of getting the children's photo taken. A really bad reaction to my over-indulging on vegetables.

I unfortunately had the same reaction a week and a half ago, with the same combination of 3 veggies. Now to work out if it's just one of them, a combination, or just the fact that I had too much.
Even though I didn't feel great yesterday, I still had enough energy to get some needed cooking and baking done. I had been struggling with the bread recipe (which worked so well at the start) and so decided to try a different recipe in the bread maker. I made a 2nd loaf today in the machine, and once I have finished experimenting with little changes, I will post the recipe. 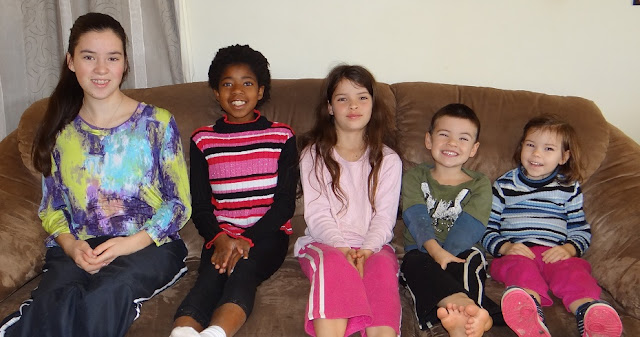 A great photo taken today of the children. 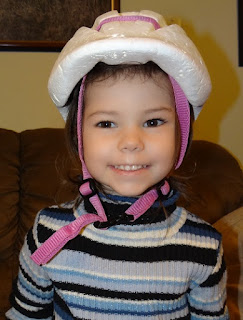 At 4:30 Asher had a 1 1/2 minute Tonic seizure. She had been playing so happily with Brendon and Hezekiah and it hit right in the middle of their tickle game. Thankfully she breathed well through it and it's been a nice 11 day break.
Unfortunately Asher needed sleep after the seizure, so we missed out going with the others to the Lantern Walk. Brendon got some lovely photos though, so I will put those all in a separate post. 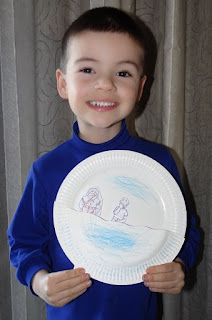 Sunday 3rd: Always fun to have the children showing us their creations and telling us what they learnt about in Sunday School. They have missed it the last 2 weeks with us not being able to get in for church. It's a relief to have the family well again. 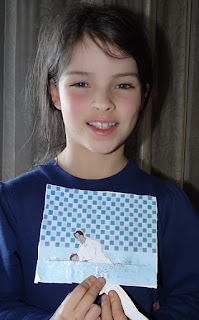 Hannah specifically moved her people so that the one was in the water, being baptised. 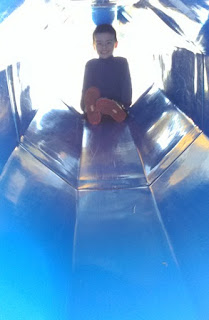 We did stop at the park close to church on our way home today. Hezekiah ran straight to the slide to show me that he was now brave enough to go down it. 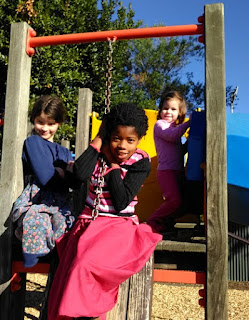 I was hoping to get a photo with all 4 of them, but Hezekiah didn't stay still for long enough. So I had to be content with these three. At least Asher waited long enough for the photo before whizzing down the slide. 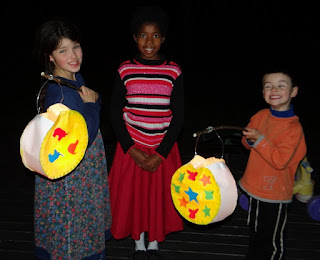 They enjoyed using the lanterns again this evening. 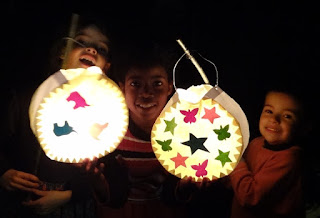 One advantage of shorter winter days, you don't have to stay up late to enjoy a dark adventure outside. It was only 6pm. 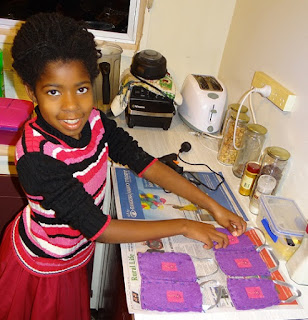 Ruth then got some glue gun work done on the gift bags she is making for her birthday party next weekend. Rachel embroidered flowers on the pink felt and she glued the pink pieces onto the bags this evening. She had made the bags herself earlier.
Posted by Buckland at 10:00 PM