Celebrate, Sunrise, Art and an Ankle 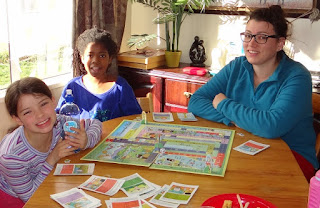 Tuesday 12th: The girls introduced Vanille to the Discover the Bible board game. It was a nice opportunity for Vanille to learn some more English Vocabulary. And the girls had so much fun too. Hannah only just beat Vanille in the final score. Well done Hannah. 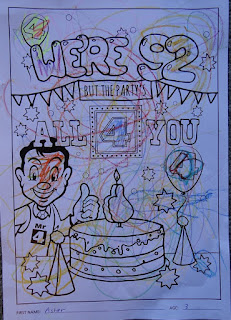 Ruth helped direct Asher in colouring in her page, and did a lovely job on hers. 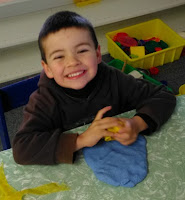 Hezekiah was at preschool today. This week they are open (Monday through Wednesday) but they will be closed next week. He is so pleased they are not closed this week too - he has so much fun. And today they had blue play-dough. Anything blue for this boy keeps him happy. :-) 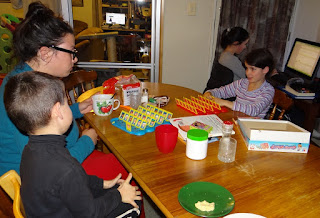 Guess Who came out tonight and Hezekiah teamed up with Vanille. She knew this game and so it was just nice English practice for her (and so much fun for the younger two to have someone older playing with them).

Wednesday 13th: It's that time of year again when we get to enjoy the beautiful sunrises. In summer it's just too early for us to enjoy. :-) 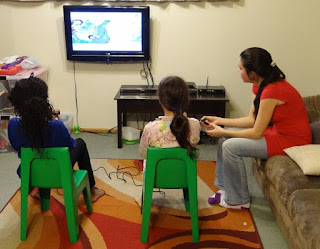 This afternoon I asked the children if they wanted to do Sing Star. It was a resounding yes. It was a bit tricky to keep Asher away while the other 4 sang, so it was only after the youngest two were in bed that I managed to get a photo. I was the 4th person, so we did the popular "party games" with 2 teams of 2. Unfortunately our one microphone has been playing up for a while, so the red team is always at a slight disadvantage. So the stronger singers get that mic. ;-) It has been great having Vanille staying with us and helping me around the house. During the first few days here she did managed to get most of the "bigger" jobs that I had thought of done (like washing windows and cleaning walls). I then had to think clearly about what other jobs I wanted her to do. So I used our white board to write some things up. I was so pleased today to see so many already marked off. The kitchen cupboards are still outstanding, but that's a job we will do together.
We have started and hope to get that finished next week. I have to sort through all the cupboards and she is helping cut wall paper which we will glue in next week. Gardening has also been a challenge as it's either been really frosty or really wet. She has already gotten some weeding done and those areas look great. Thursday 14th: Bastille Day in France today, so I wanted to make something special for Vanille. She had wanted to cook something for us, but it's rather tricky when it needs to be gluten and dairy free. So I searched for some ideas and one that I thought I could tackle with what we had on hand was a fruit galette. It turns out that Vanille has never had a fruit galette but was thankful for the effort to do something "French" for her. At least the red starwberries and raspberries and blueberries worked nicely for the French colours. Thankfully Vanille said she didn't really have any traditional food for Bastille day - it was more the tradition of enjoying fireworks. I did however decide to do something else with the French flag colours and made some multicoloured jelly. Only when I brought it out to show her did she ask me what it was. She has never had jelly (Jello for American reference) before.
This was actually my 2nd attempt with a drop of blue food colouring (and just 2 strawberries for the red).

This was my first attempt. I started with thinking I would do a blue layer with blueberries. Well - they formed a beautiful deep red layer. Another problem was that the berries reacted to the gelatin and it didn't set properly. As I didn't have purple cabbage to make natural blue colouring - I used some food colouring to make the blue (just 2 drops).

Friday 15th: What a beautiful start to the day.

And I love how quickly it can change. It's that time of year that we get to enjoy these beautiful sunrises. In summer it just happens too early for us to enjoy. ;-) 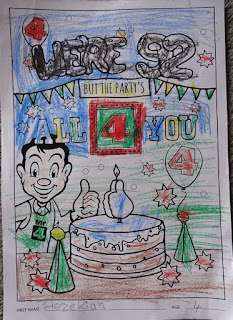 It was a beautiful start to a difficult day.
I had enjoyed a nice big helping of cauliflower and broccoli with my fish yesterday (making sure I avoided sweet potato this time) but I again had a reaction. This made me more irritable this morning and I just felt really stressed.
And then we got the shocking news of all the trouble in France. Poor Vanille was frantically contacting family and friends to make sure that they were safe. So sad that there would be so many deaths on their country's holiday. So Vanille had a hard day emotionally, feeling so sad for her country and all those killed.

Hezekiah got his colouring in page done yesterday and asked me specifically to get his water bottle when I went out in the afternoon.
The reason for the trip was to get Rachel's ankle scanned. We became quite despondent last week when her ankle got worse after some simple exercises that the physio had given her. We really thought she would have had a lot more improvement by now (it's been 7 weeks already) but instead it seems to have just gotten worse. She is even waking at night sometimes with pain. 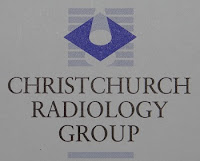 So it was good to get this done to make sure we were not missing something more serious. At least the radiologist was happy to chat a little to us while she was busy. She looked very carefully at the tendons and ligaments and said that although some where very long (probably from her extensions at ballet) there were no tears. There was one area with extra fluid - exactly where the intense pain on massage is - so we will wait to hear from the physio and doctor as to what we can do to try and reduce that. At this stage she is expecting to not be able to do her exams at the end of August (just 6 weeks away now).
Vanille came with us and so she had some time at a big shopping centre while we were busy with the scan and she got to enjoy some bakery goods and chocolate. Nothing like some comfort food when you have had sad news from home.
We ended up having a lovely time out and I think it was relaxing for both Vanille and I to get out and just do something a bit different.
Posted by Buckland at 10:00 PM