Friday 10th: On Friday evening Ruth started a 40 hour famine of technology to raise money for Refugee children. You can still donate via her page here. 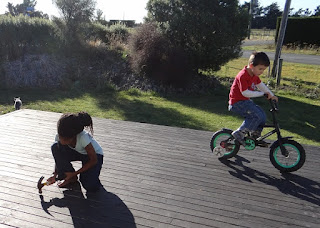 Saturday 11th: The children had so much fun today. The "no technology" rule for Ruth created so many ideas of games in her head to play and they had a great time.
She started off just getting outside and looking for something to do. That ended up being hammering down any nails that had lifted slightly. 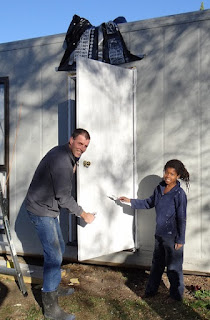 The door has finally dried out so it got sanded down and then had a primer put on today. Ruth always keen to help Dad with a job.
You can see the black bag flap that we had to put up. This normally hangs down over the door, and has done a pretty good job of keeping the door dry. 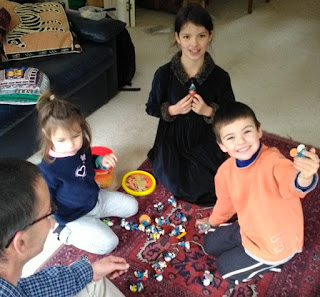 Sunday 12th: A lady at church has often asked about what our family eat so that she can organise Sunday lunch for us some time. Today we got to ask her if we could take her up on her hospitality offer (without the food). We had our lunch all packed for today, but the weather turned really cold through the morning, and the thought of eating at a park was not pleasant at all. So even though it was such last minute, she graciously opened her home to us. She had so many "old" toys that Brendon and I recognise from when we where children. I got a photo of the children enjoying her wonderful collection of smurfs. :-) 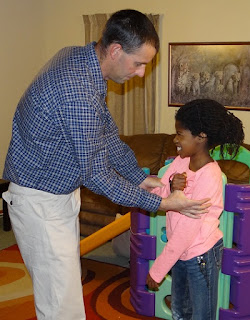 In the evening Ruth got some self defence training from Dad. We only heard on Thursday from her that a boy in her class has been hurting her. During break, while lining up for a game, he would often come up to her and grab her arms and move her out of the line. He was so forceful that he had bruised her. So Brendon got her to practice getting to release someone gripping your arm. She was also given some other ideas of how to defend herself if she was not able to manage with getting his hand off. We also encouraged her to be brave enough to say something (like "don't touch me" or "leave me") if she sees him coming.
UPDATE: On Monday I attended a welcoming ceremony for a new teacher and all the new students (which included our two girls). I ended up sitting near Ruth's karate teacher who works at the school. Once the meeting was over I mentioned this issue to him. He got to speak to Ruth's teacher the same day. It wasn't long before the teacher was chatting through things with Ruth and then the boy involved. 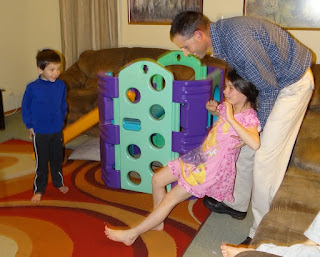 So hopefully she won't even need to use her self defence techniques and the issue has been sorted.

Ruth then asked Dad to do the trust fall. Hannah was rather scared at first (you can see that leg goes back). 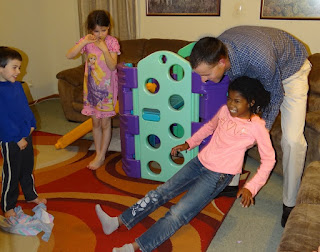 Ruth managed to move quite far away and still trust that he would catch her. 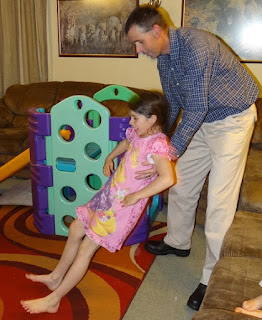 Hannah did really well though and managed to keep her legs nice and straight. It helped having watched Ruth do it from such a distance.
You can see from all the smiling faces how much fun this was for them all. :-)
Posted by Buckland at 10:00 PM