Cell, seizures and a seat 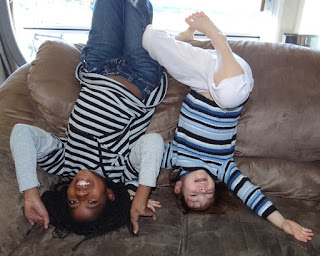 Monday 6th: Stripy girls having some fun. It was nice to have Ruth and Hannah home today with it being a public holiday. The only down side was that Brendon had to work. 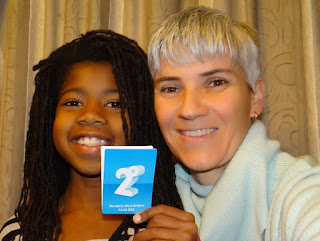 As soon as Brendon was home in the afternoon I headed into town with Ruth. I had to pick something up, but while we were there I bought Ruth a $5 sim card that she can use in one of our old phones. She was so pleased. I don't know that it will get used much, but she has wanted a phone for ages. So now she officially has a phone. :-)
We picked Rachel up on the way back. She had a great camp and grew so much through this weekend. 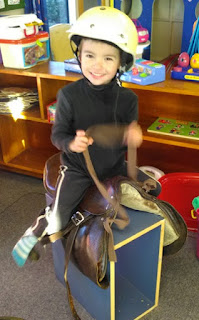 Tuesday 7th: Hezekiah was so excited about showing me these saddles last week, on a day I didn't have my camera with. So now that I have my phone with me all the time, I tried to get a couple of photos today as they were out again. 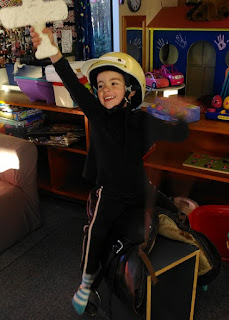 I'm still having to learn how to take good photos with the phone. I know it's got a good camera on it, but I need to know how to use it well.
He brought his sword with today for "news" so quickly went to get that for the photo too.
Asher was at preschool as well today. This was her first Tuesday but as yesterday was a public holiday, she still only had 1 day this week. I picked her up as usual at 11:30, we stopped at home for a quick lunch and then headed off for her appointment with the homeopath. We could do very detailed testing as we had done with Hannah and myself, but we were still able to get a good idea of what foods Asher should be avoiding and what she should be ok with.
Last week we had tried gluten free pasta with rice and quinoa. Hannah can't have corn, so that's the only one she can have. I wondered about the quinoa with Asher but decided to give it a try. For two nights she woke at 3am (exactly what happened when she had quinoa months ago). So we stopped her having the quinoa pasta and she started sleeping through again. So with this in mind, I was very interested to see if the homeopath's machine would pick up that Asher should not be having quinoa. And it did. The homeopath said it was the first time she had ever seen someone react to quinoa.
As with Hannah and myself, Asher should not be having dairy. It did however show that she should be fine with butter. Yay!!! And cheese came up as ok too. I will take it slowly with cheese, but was really pleased to see these on the "ok" list. Asher didn't actually have many foods that were on the "no" list. They included gluten, oats, quinoa, banana, oranges, mandarin, raisins (although grapes were ok), strawberry (although other berries where ok), and dairy (as mentioned).
She did have a few vitamin and mineral deficiencies as well as a few toxins in her system. There was also a very strong result for pinworm. So she said we may see those worms in stools as the remedy works and helps her body clear things out.
Asher had her first dose of drops on Tuesday evening and then a second dose on Wednesday morning. Then treatment got delayed (details to follow).
Wednesday 8th: Brendon and I had a rough night last night along with Hezekiah who started vomiting in the night. I think in 15 years of parenting, this was the first ever tummy bug we had to deal with. Not bad for 6 months of school and preschool exposure. So Hezekiah missed preschool today and I was so thankful to be able to leave him at home with Rachel. Thankfully the washing machine was almost empty, so all the extra washing could just wait for Thursday (as Wednesday is always so busy). Brendon was so wonderful and rinsed off all the dirty bedding straight away.
Hezekiah did vomit again around mid morning, but that was the last time. I'm glad for him it was later in the week and he only had to miss one day of preschool. He does so enjoy it.
(Note: I was also pleased that it didn't spread to anyone else in the family this week.)
At 6:45 Asher woke to a Tonic Clonic seizure. I had heard someone in the kitchen and called (thinking it was Rachel) but it was Brendon, just about to leave. The seizure went on for 5 minutes. Just as it stopped I had the medication out and was getting ready to draw it up. After a couple of seconds of quiet, a Tonic seizure then started. I then tried to get the syringe attached and it would not attache properly. I was so glad Brendon was there as I could quickly run to the kitchen to get a different syringe. By the time I was back and had the medication drawn up, the seizure had stopped. It had been 1 1/2 minutes more. What an exhausting start to the day for her.
As you can see from the photos, we ended going to Champion Centre anyway. I just let Asher sleep a bit longer (Rachel stayed with her so I could get things ready) and we just left a bit later than normal. Rachel phoned the Champion Centre to let them know we would be late. 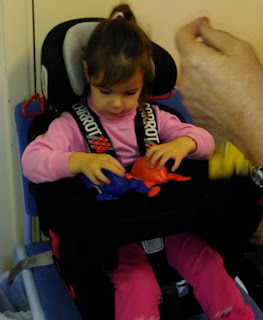 One main reason we decided to still go in today, was because we had an appointment to get Asher's new car seat set up. An OT at the Champion Centre had done a funding application for us and researched all the different options. This "carrot" seat was her suggestion. The Medifab representative would also be here today to answer any questions and help get it all set up for Asher. He arrived just as Asher was heading down to her time in the music room, so they brought the chair with. She was happy to get in and out of the chair while we sang songs together and played with some of her favourite things (these frogs and the scarves).
We made adjustments after this and you will see in a photo further down how nicely the middle section supports her body.
After a lovely morning at Champion Centre, I got to see how well the seat works as Asher had a seizure on our way home. She is so big now that we have to leave her in her seat if she has a seizure (to keep her from getting hurt), so it was a real blessing that this seat supported her body so well and she could keep breathing nicely through it. The seizure was a 3 minute Tonic with her head and eyes pulling to the Right. Thankfully Asher was sitting next to me, and so as soon as it started I could see her legs stiffen in my peripheral vision and could pull over and give her my full attention. 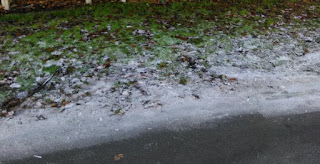 Not long after we were home and she was in bed (around 1:30), I noticed her eyes were open, so I went to check on her. She was not able to respond to me for about a minute. So that made it seizure number 3 for the day already.
I then took Ruth to Guides in the afternoon. I took this photo of the frost. It's a good summary of what I saw so much today. There were so many areas that were still solidly frosty, even late in the afternoon. 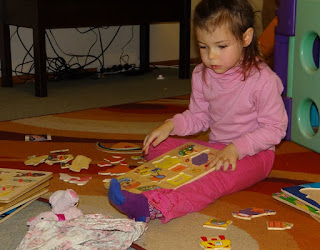 At 3:45 Asher had a 1 minute Tonic Clonic in her bed. Rachel had noticed it on the monitor and gotten through to her quickly.
Brendon then got home and she had 1/2 minute Tonic Clonic at 4:30. Thankfully the length of the seizures was getting shorter, but it was quite scary to have 5 already.
At this stage we were not sure if the seizures were a reaction to the remedy she started, or her getting sick from Hezekiah. So Brendon and Rachel got some mint essential oil onto Asher to try and neutralise the remedy (if that was the cause). There are times with homeopathic remedies where symptoms get worse and then get better (often called a healing crisis), but with so many seizures we just wanted to play it safe. We will start the remedy again at some point, and just go far more slowly with the doses. 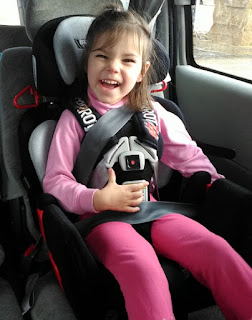 The photo above was taken in the evening. It was lovely to see her happily playing with her puzzles, but you can see her cheeks are a bit flushed. She started with a fever after the last seizures and it went on through the night (reaching 39). So it was a very restless night for her, but nothing more came of the fever. It was gone by the morning and she didn't get sick. So the fever may also have been part of a "healing crisis". Time will tell.
Thursday 9th: I took this photo when we went to fetch Rachel from work. You can see the clip area of the car seat well. You can only unlock the straps with a key (you have to push that red button). So it's "Asher proof". The seat-belt comes over the straps (rather than strapping the seat in) so we had to make adjustments after this as the belt is a bit high on her neck. That black area behind the straps is a nice firm support. So it holds her really nicely, and she looks very comfortable in it too.
Thursday is also dancing day, but it was only Ruth dancing today. Rachel's ankle needs a lot more rest than we realised (from her twist on Tuesday 31st May). She has damaged the tendons on the inside of the ankle. They are a lot more complex in this area (and it's more often the outside that get damaged). The physio has given Rachel exercises to do and suggested more rest.