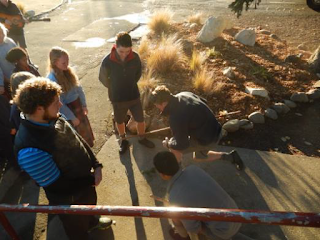 Monday 13th: I dropped Hezekiah and Asher at preschool and then headed up to the school with Ruth and Hannah. A new teacher was being welcomed today, and so all the new children to the school this year got included in the welcome ceremony - called a powhiri. I was told I could join the girls, but I thought I would get better pictures from inside. I was wrong. The newcomers welcome started outside. This photo was on the front of the school newsletter this week. Ruth managing to get into the photo too - which was nice.

It was really special having the whole school singing for them. Unfortunately Ruth and Hannah ended up sitting behind some tall children, so I was not able to get them in a clear photo (also not having my real camera with me and only my phone). 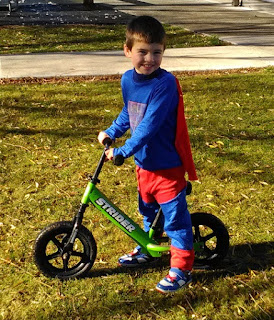 I took this photo of Hezekiah when I went to fetch Asher at 11:30. He is regularly dressed as a super hero. :-) And he is doing a lot of practice on the balance bikes too - which is great.
Asher had her lunch as soon as she got home but then a little later once mine was ready, she came over to join me. I had already put her plate and spoon away, so I just fed her from my plate (and my fork). So I was a little concerned when she started vomiting on Monday evening. She vomited a few times through the evening and then to our relief, it settled down through the night. The thought of her getting sick in bed through the night was not something I was looking forward to having to deal with.
Rachel also vomited this evening but we were not sure if it was from karate soon after eating a rich meal - or the tummy bug. (It ended up just being the once thankfully - so perhaps not the bug.) 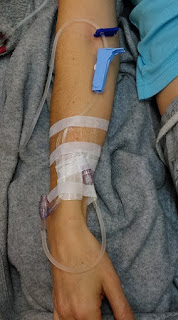 Tuesday 14th: Unfortunately at 2am, I started vomiting. Thankfully it settled eventually and I got an hour of sleep. Asher woke at 5 she had a dirty nappy (from diarrhoea) and by the time I had her all cleaned up (and her bed changed as it had leaked out of her nappy) I was feeling terrible. I had to call Brendon and ask him to come home. I had a terrible morning with horrible pain which ended with me at the doctors rooms. I originally just wanted something for the pain. I had taken pain killers earlier in the morning as the pain was so bad. I didn't want to just keep putting pain killers in my empty stomach though. As I was waiting for the doc to arrive and approve the pain killer and IV, the nurse gave me some electrolyte drink. Just 2 sips got the pain going so intensely again and after just a short time I vomited again. I hadn't been able to vomit for a number of hours and this actually gave me so much relief. I didn't have any pain after that and so they just focused on getting a litre of IV fluid in to help hydrate me and get my blood pressure back to normal. It made such a difference.
Ruth vomited early this morning and then again after trying to have some breakfast. So she spent the day resting. Hannah had said her tummy was sore when she got up, so she spent the day home too (just encase - although he didn't get sick at all this week). We kept Hezekiah home from preschool too as a precaution. 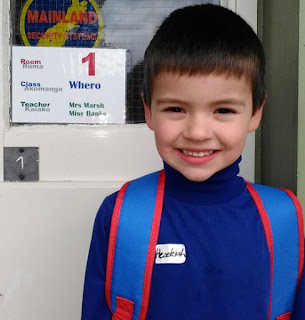 We had a quieter afternoon and then Asher vomited again in the evening. That seemed to be it for her though as well as Ruth. So 24 hours or less for the both of them. Brendon started feeling ill on Tuesday night, but it also only lasted about a day for him.
Wednesday 15th: Hezekiah was clearly well on Tuesday - as busy as normal. So he was able to go to preschool on Wednesday. They had a really special day planned with a morning visit to the school. Whero class is the class he will be joining in October when he turns 5. So it was a very special day and I was really pleased he was healthy and could attend. Up to this point he had been a bit negative about going to school. By this morning through, he was really excited about the visit and he is really excited about going to school now. 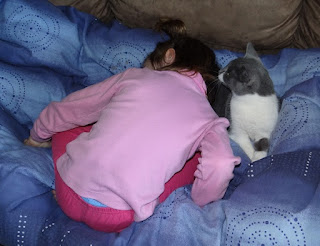 Thankfully Brendon and I managed to get many hours of much needed sleep through the day.
Asher still a little tired but recovering well. I liked how she came and gave Little Miss a cuddle this morning.
Thursday 16th: Hannah spent Wednesday at school but then complained of a sore stomach on Thursday morning again. Again, I didn't want to take any chances, so I said she could stay home, but that she would need to stay in bed. She eventually came out at about lunch time saying she felt better. I asked if she was ready to go to school and she said yes. So Hezekiah and I drove her up. I went to update the office and Hezekiah ran around on these benches on our way out. So much energy in that little body - clearly not sick at all. :-) 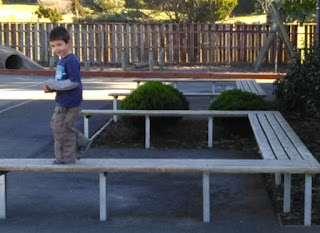 Although I had been feeling much better through Thursday, after driving Ruth to and from dancing, I just went downhill. Thankfully no more vomiting, but the diarrhoea just kept going. I phoned the health line at around 9pm to ask for their advice, as I had only managed to sip about 1/2 a glass of water through the afternoon and I was loosing way more liquid than that.
After asking loads of questions, her advice was that I see a doctor within 6 hours. If I waited longer than that and the diarrhoea continued as it had been the last 3 hours, I would be putting myself in danger. So after a bit of discussion about the possibilities of Brendon taking me or me trying to drive myself, we decided it would be safest to just call the ambulance (this was one of the suggestions the nurse had given). 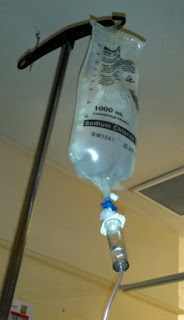 The paramedics arrive a little after 10pm. They set up an IV and were hoping to get permission to just give me a litre of fluid and then leave me to see the doctor in the morning. They were not really happy with this though. They felt that even a litre of fluid would not be enough to see me through the night, as I was continuing to loose fluid, a few times every hour.

So we headed into town, with the first litre of fluid getting in during the trip. Instead of heading to Christchurch hospital, the hospital organised for me to go to the 24 hour surgery. They are much smaller - so less likely to have germs spreading. I was thankful that all the expenses were covered by the hospital.
Friday 17th: I took the photo of the 2nd litre of fluid at 1am. By this stage they had drawn blood and sent that off with a stool sample to get tested. Before this 2nd litre, they gave me medication to stop nausea. I hadn't really felt nauseous, but realised later in the morning how beneficial the medication was. I had not wanted to eat the whole week, and finally my stomach felt ready to cope with some food.
It only took a couple of hours for the blood results to come back. 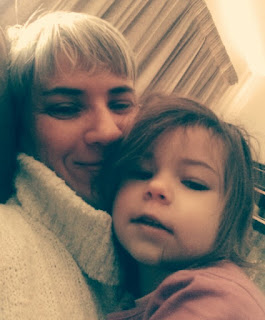 Amazingly my electrolyte levels were ok and potassium levels only slightly low. So the doctor said "whatever you have been doing, is enough". I was so grateful for the box of electrolyte sachets that the nurse gave me on Tuesday - as they were a key to me not being much worse. The 2 litres of fluids obviously helped tremendously too.
By 4am I was moved "upstairs" to a room where I could get some sleep. Normally people would just get a taxi home at this stage but as we are so far from town, they said I could just spend a few hours there till Brendon was able to come and pick me up.
I had expected Asher to pin me to the couch for a good long hug when I got home - and I was not disappointed.
From around 4am I started to feel much better. Although I seemed to have the pattern of improving through the day and then everything just started up again each morning. This continued till Sunday morning. So over 5 days for me before I was finally over it. 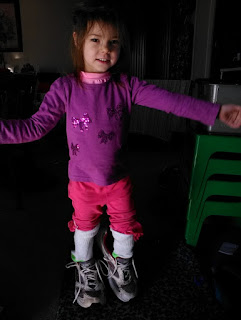 Saturday 18th: This evening Hezekiah started with a fever.
Sunday 19th: No other symptoms overnight but he woke in the morning with a sore throat and no voice. So just like that he was hit with laryngitis. So just as I finally get through my illness, another one has hit the family. At least there was no doubt about us making it to church. It would just be a quiet day at home. 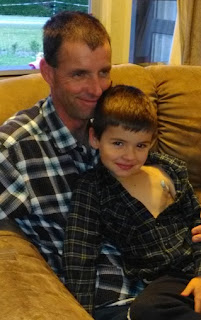 Thankfully Hezekiah's fever came down through the day. It went up again a bit in the evening but he was not feeling too ill. It's just the hard thing of not talking too much. And we had to get really good at asking "yes/no" questions to find out what he wanted.
Posted by Buckland at 10:00 PM