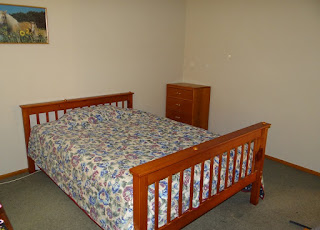 Thursday 28th April and the girls had the old R room totally sorted. Brendon thought it would take them months to get cleaned out. Ruth had the added motivation that I told her as soon as the room was clean and ready, we could put our details on HelpX. We heard about HelpX through friends who regularly have international people staying at their home. They give 4 hours of work in exchange for accommodation and food. Ruth is so excited about having international people come and stay. She specifically wants someone from Germany. :-) 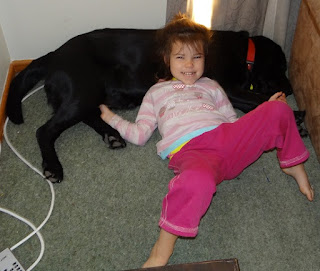 We are at a bit of a disadvantage being "in the country" without public transport close. We are still hoping to at least get some help through this though. The helpers will sometimes come for a few days or a week. Our friends have had ladies staying for two weeks even. The idea is that they will help with basic housework and or gardening (in our case) in exchange for accommodation and meals. It's described well on the website when it says "a cultural exchange for working holiday makers."

It's been lovely to see Asher showing more and more affection to Shadow. Even though I don't have the time to put into intensive Epilepsy Assist training with Shadow, she is at least being a "therapy" dog for Asher. This is so good for her.
Thursday was a very busy day for me too. I had a very long to do list and was rather pleased with how much I got through. I realized that a couple of the items needed to rather go on a more "long term" to do list and I will keep this one for just the daily things.
Friday 29th: Asher had a 4 minute semi-conscious episode this evening at 7:15. She had started walking out the room and I could jut tell by the way she was walking that something was wrong. Brendon went to pick her up and immediately saw that she was indeed having an episode. We could tell clearly when it was over as she blinked and started closing her eyes for a nap.

Up till that point she could not speak. Once her eyelids were moving I got a small "hi" from her. We are again thankful that she has had a good 15 day gap since the last seizure.
Saturday 30th: We all had a chuckle at lunch time today when Little Miss was spotted, lying in exactly the same position that Shadow loves. 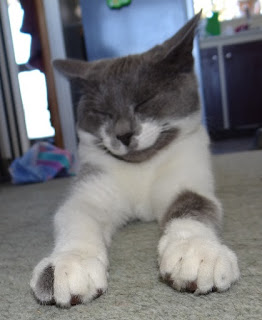 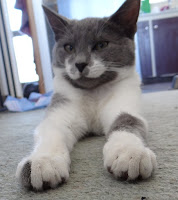 She got a little disturbed by the attention and lifted her head. So Ruth took these photos too. Looking like a cat statue. 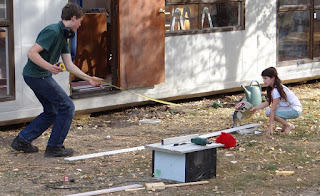 Tobias came around after lunch to help Brendon put the architraves around the windows. Hannah liked being a helper and I was pleased to quickly get this photo. 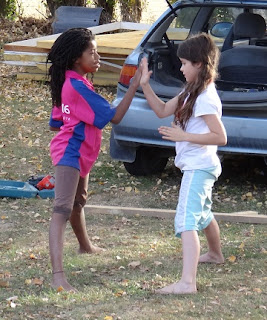 It was also nice to see Hannah and Ruth playing. I know Hannah is really looking forward to having Ruth start school. I think she will get a lot of comfort from having a "big sister" there. Even if she is in a different class.

For those wondering what architraves are. Instead of having the window frame look like this (Left). 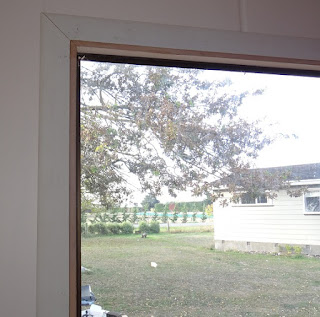 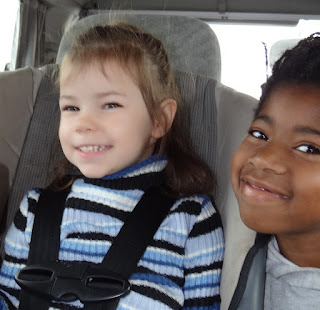 Sunday 1st May: I had actually been waiting for a full blown seizure through Saturday. It seems that often if she has a small episode she ends up having a "bigger" seizure within the next day or so. So I wasn't too surprised that she had another episode on Sunday morning. I was surprised that it was another semi-conscious episode and not a full blown seizure. Again it lasted at least 4 minutes. She had come into our bed just after 7am and was lying on me as she loves to do. I actually noticed small shivering but before I could think too much about it Hezekiah came in. I asked her if she heard Hezekiah and I was surprised that she had not responded to his noise or me talking. So I lifted her off me and realized she was having a seizure. I have noted it again as a semi-conscious as she responded with her eyes to me opening the curtain and she looked at Ruth when she came in and said hi. 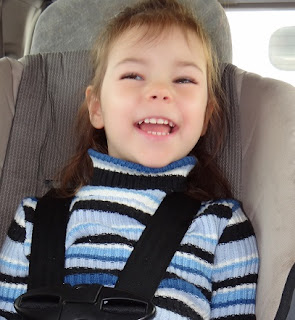 So it wasn't a true "vacant" seizure because she was moving her eyes and had some amount of consciousness. We didn't really want her to sleep as we wanted to head off to church within just over an hour. So although we let her rest, we kept talking to her and encouraged her to have breakfast which she did. It was while we were driving that I noticed that when she smiled at me, the right side of her face was paralysed. Brendon then said he had noticed that too. It was really emotional for me to see the impact that it had on her. I had to remind myself that she had Todd's paralysis in Jan 2014, when she again didn't sleep after a seizure and was paralysed on her whole left side for an hour. This temporary paralysis can last for many hours, so I was really pleased when we saw her face starting to work properly again.
It was also a blessing to have a friend remind me at church that God was not surprised by this. He has Asher in the palm of His hand. 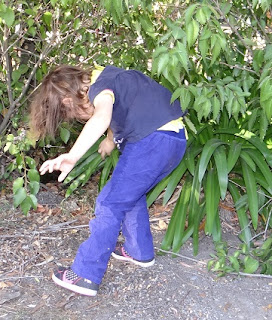 On the way home I dropped Brendon and the children at a park while I got some shopping done. I got a couple of pictures when I got back. Asher was enjoying going right up to plants and feeling them on her face and arms. 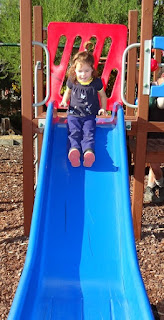 I have taken quite a few photos of Asher on slides as I want one for her picture book. 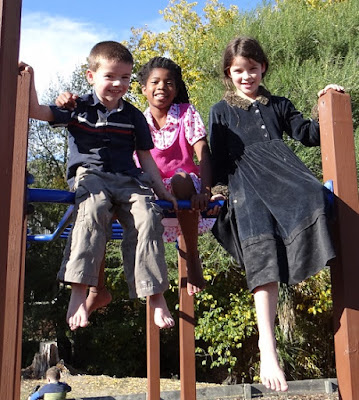 Just as we called the children to head off, Hezekiah said he wanted a photo up on the monkey bars. When we came to this park a few weeks back, I had lifted him up here so we could take a family photo. He got very stressed by it though (as soon as I picked him up and no photo happened). I had no idea it would stress him and so I spoke to him about it and apologised for scaring him. I was really pleased when he wanted me to lift him up there today. He was still a bit scared once I got him up as it is high, but I helped him to see where to hold on and made sure he knew he was stable and safe before I let go of him (and made sure he was happy with me letting go). Ruth put a comforting hand on his shoulder too. It was so nice to see him developing the courage he needed.
Posted by Buckland at 10:00 PM