First day for Ruth and Asher

I will spend most of the 3 hours with Asher at preschool today, just giving tips and ideas to Lynda as things come up. Lynda will be Asher's Early Intervention Educator during her 3 hours at preschool. She is employed by the Champion Centre to spend the time specifically helping Asher and supervising her because of her epilepsy.

The hook for her bag was named and it was lovely to give her the job of carrying her bag in and hanging it up. 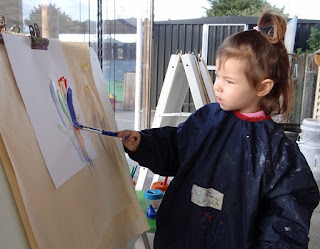 It didn't take her long to see the paint.
Then she headed over to the sandpit. It was lovely to have a couple of other girls playing there too and Asher sat and played next to them for a while (I wished I had gotten a photo). It is going to be so good for her to have other children to watch and copy.
As expected, she moved from one thing to the next, discovering so many fun things to do. 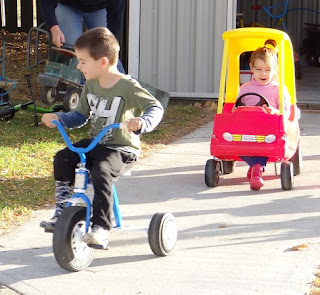 Hezekiah specifically went and got the little car for Asher. Such a good big brother.
I had to smile during mat time. One of the children had asked why Asher wasn't sitting and the teacher was explaining to the children that Asher was new and needed to learn still. The teacher had told me before that I was welcome to say anything to the children. So at that point I also just explained that Asher will take a bit longer to learn the rules than the others. I explained that she found it difficult to sit still and that she didn't talk much. I told them that sometimes she shakes, and Hezekiah piped up "yes, she has seizures". 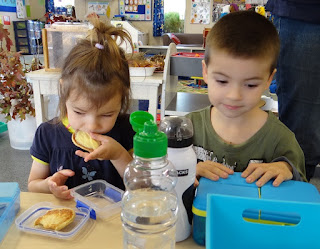 The preschool had told me that it was really important for them to have all the children sitting at the table for kai (food) time. So I brought a whole range of things to try and tempt Asher to eat something. She doesn't normally have morning tea, but managed really well today and actually ate white a bit too. 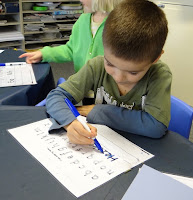 After kai time they do an art activity. It was great to see these laminated pages that they each have to practice their name (so that they can write their own name on their art pieces or cards ect). So being there for Asher had the advantage that I could get a couple of photos of Hezekiah too. :-)

Then I headed up to the school. We had planned with Ruth's teacher that she would read her adoption story to the class just before their morning tea. I said that I would come with so that if they children had any questions that Ruth didn't know how to answer, that I could help out.

I could tell that she was nervous as she read but she still managed to read it really well and for most I think she looked totally calm. I had a little chat to the teacher once the kids had left for morning tea. She told me that they were doing debates and she didn't want to put too much pressure on Ruth in her first week. So she put her in a team with 2 others and she could help write it, but would not need to speak. When she came home, she told me that she was the first speaker in her team. So she wasn't worried at all about getting right into it.
I then headed back to the preschool. Hezekiah was enjoying the dress up corner. I think this superman outfit is worn often by him. :-) 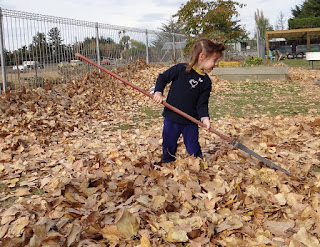 The autumn leaves in the garden were a great addition to the play today. When Asher saw a teacher raking she went over to have a turn. They also had fun throwing the leaves up in the air and having the wind blow them away. Hezekiah also enjoyed loading them up in tractor's bucket (below).
It was a really productive morning for Lynda and I. I realized that Asher needs more physical direction that other children her age. 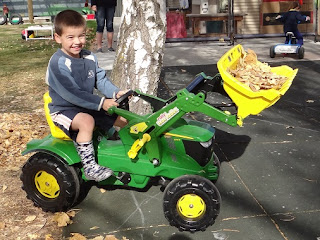 When she saw the slide she started climbing up it rather than the steps. We want her to form good, safe habits from the start, so I actually had to take her off the slide and take her to the steps (she was not responding to the teacher's instructions to use the steps). I only had to do that twice though, and then she started using the steps. If we don't correct her quickly with things like this, she will form a pattern in her brain of how she does it and it will be very difficult to change.
She also needs to be physically helped to keep a safe distance behind swings as she has no concept of the danger behind moving swings.
So a very successful day all around.
Posted by Buckland at 10:00 PM