With Asher starting preschool next week I decided the easiest way of sharing some videos with the teachers would be to post them here. I generally don't give any info on YouTube so that they don't come up in any searches. I will give some info here though, so that the teachers can feel a little more prepared for what they could potentially see.

I hope this does not offend anyone.

Please DO NOT watch the videos if you think they will upset you.

I see this as educational. At a meeting at the preschool last week if was mentioned that there may be someone who can come and give the teachers specific information about seizures and perhaps even be able to show them a video. That got me thinking about all the videos we have of Asher. If we can use these videos to help equip and educate teachers and help them feel more prepared, then I think it's a good thing to do.

These seizures happened during 2015.

Tonic Clonic seizure (grand mal)
You can see with this seizure that it is not always all the limbs that are involved. This is still a Tonic Clonic as those muscles on the left arm and leg are tightening (Tonic) and relaxing (Clonic).
You can also see that we didn't attempt to move her onto her side. Thankfully her head was to the side, so if she did drool, it would come out and not choke her (you see the cloth we put under her head).

Tonic Clonic seizure (grand mal)
They can be noisy. Don't get stressed about this. Even with a lot of noise in her throat she can still get air in. In this case it's actually the big breaths that are causing the noise.
You can also see that the muscles in her face can be affect too.
Mostly we just leave her where she is and move things out of the way.

Tonic Clonic seizure (grand mal)
Sometimes the movements can be very small and fast (like here) and other times they can be very strong and slower. They can also change pace during the seizure as this one did near the end of the video.

Going back to 2014. I don't even know how I classified this one.
She is a little stiff but the movement is more like shivering.

At the end:
Often it can feel as if she just holds her breath. She does tend to take nice big breaths once the seizure stops. You will also notice that she starts blinking and will eventually close her eyes as she falls asleep. Just for interest - a seizure doesn't happen while a person is a sleep. So the ones she has had at night - she actually wakes up before the seizure starts. So her eyes are always open during a seizure. 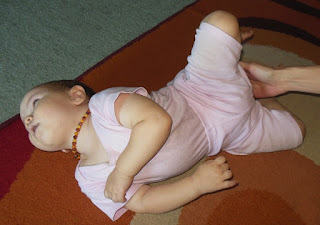 I don't seem to have any videos of a Tonic Seiuzre - so will at least include this photo so that you can see how arched her body can be. 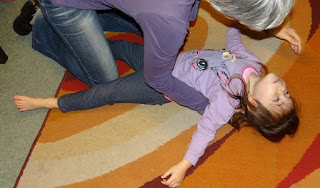 May 2016 Update: Here is a photo of the Tonic seizure she had on 22 May. She was standing when it started and she just tipped her head back like this. I spotted it, so quickly got to her and lay her down (that way I knew she wouldn't fall over). Because her head was back like this, I just put my hand under her back to help keep the shape so that her muscles didn't take all that strain. Because her hands were more rigid, I could not move her onto her side.

Here is a video of that same seizure. The first position lasted for about 2 minutes and then there was more shaking. The rigidity got less, so her body relaxed and she could lie flat on the floor. The seizure lasted 5 minutes in total. In this video you can see her eyes flickering (which can often happen) as well as her hands twitching. You will see that we have our hands close to hers so that she can hold our hand if she wants. We don't force her to do anything or move her specifically or restrain her in any way. We just move with her but give her that touch of reassurance that we are there.

While I'm updating I thought I would ad this video on from April this year of a vacant seizure. Why I specifically put this on is so that you can notice the change when the seizure stops. You can hear that I'm not 100% sure it has stopped, but the eyes give the indication that it is changing. When she is able to say "hi" then I know she is back. Thankfully her breathing was good through this one, so she didn't have any colour change.
Posted by Buckland at 12:30 PM