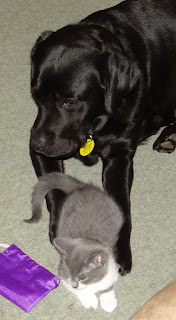 Friday 5th: Little Miss always goes to sleep with Shadow once Brendon is up in the morning and Shadow goes through to the dinning room. So sweet. Brendon took the day off work today so that we could get our packing done and head off to camp soon after lunch. It helps the weekend feel that bit longer. 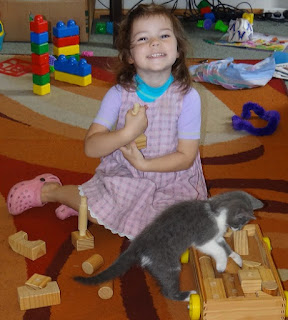 RIGHT: Little Miss playing with Asher this morning. Thankfully Little Miss went to stay with one of her brothers over the weekend while we were away.
BELOW: We were very grateful to be able to borrow a friend's van and trailer for the weekend. The children loved the idea of the seats facing each other - so they didn't even use the 3 back seats. Shadow had her mat between them and we had a good trip there. Another huge thanks was that Shadow was given permission to join us at camp (even though she is not an official assist dog and doesn't legally have "access" to public places yet).
Not too long after we had arrived and unpacked the trailer - Asher had a Tonic Clonic seizure. 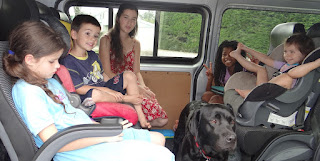 Brendon was over with the girls helping them set up their tent, so it was a good opportunity for me to get Shadow to bark to call. She did bark on command, but not loud enough for him to hear (so I gave a quick call). Thankfully it was only around 2 minutes long. I was then forced to just sit and relax with Asher sleeping on my lap, while Brendon and the girls got some tips and help on setting up the tent we had borrowed. 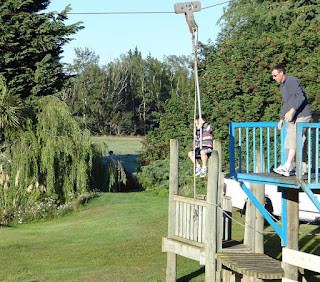 Saturday 6th: By 8am breakfast was done and the kids were already outside having fun. It was lovely having a nice clear start to the day. Hezekiah not worried at all about this high flying fox.
BELOW: The ground still very wet. We should have had gumboots for these wet walks as we went through our socks very quickly and my shoes got very wet.
Shadow loved running for her ball. She was pleased with how much time Asher wanted to spend walking. 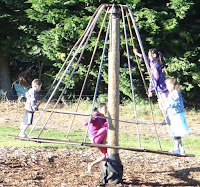 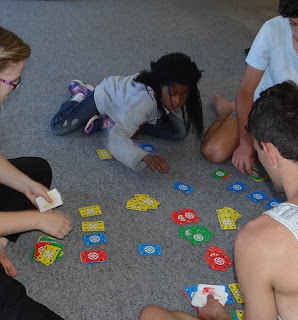 Ruth very quickly getting into games of Dutch Blitz. 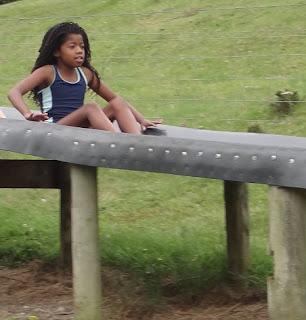 After lunch the water slide was put on. The children missed enjoying this last time we were at this camp site as it was so windy the whole weekend. So they made the most of it. 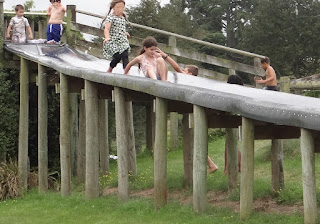 It's starts nice and high off the ground and is wonderfully long (see below). Most of the children struggled to slide very far though. Hezekiah was happy to just run all the way to the bottom.
Thankfully Asher was happy to sleep on the bottom of a bunk bed in our room and fell asleep quickly for her nap time. The video monitor also worked really well and we were able to keep an eye on her sleeping while we were hear watching the children on the slide. 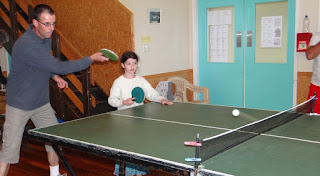 Enjoying some indoor games for a while to help them warm up. It's always such a blessing for me to see the younger children being allowed to join in with the games. 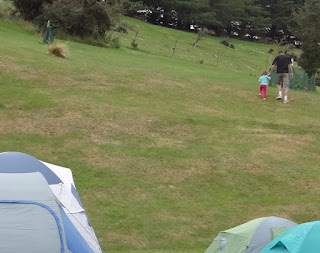 It didn't take Asher long after she was up from her nap to start her hill climbing exercises. She just loved this hill and would walk up and down over and over again. It's very steep and she heads right to the top (a bit further up on the left) and then loves running down. It's that steep that she constantly looses her footing coming down and that makes it all the more fun. Brendon, Shadow and I got a lot of exercise on this hill over the weekend. :-) 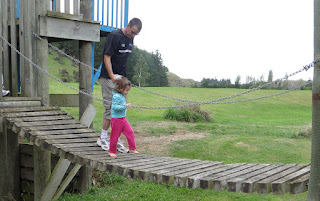 She loved this swing bridge too. 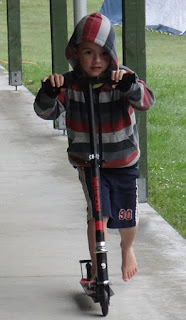 Hezekiah played so nicely with a 9 year old boy who stayed just down from us. He and his brother had their scooters at camp, and his brother allowed Hezekiah to borrow his. They had so much fun scooting around the entire building. We hardly saw Hezekiah as he was always off playing. 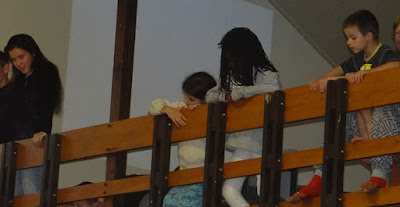 On Saturday night there was a "talent show". It was enjoyed by all.
This photo of Hezekiah sitting on one of the bigger boys knees was a nice reminder of how good the older boys were. They let the younger ones join in with games and chatted to them and made them feel a part of things. It was wonderful to see. 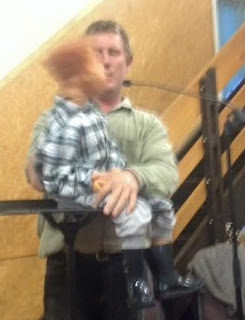 I didn't take a photo of the ventriloquist act and then wished I had. So I downloaded this photo from the one Church's facebook page. It really was a highlight of the show for me. He is very talented and it was such a blessing to have a bible story told in a way that had everyone listening to every word. What a wonderful ministry opportunity is opened up to him. Adults and children alike are happy to listen to a bible story they may have heard a hundred times before. And it was wonderful to just laugh and enjoy the humour and jokes that were a part of the show too. 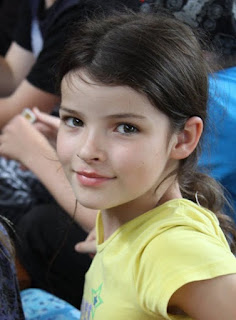 The next photos were also downloaded form the Church's page. I didn't get many photos of the girls. Most of the time they were off somewhere. 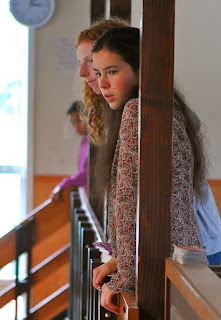 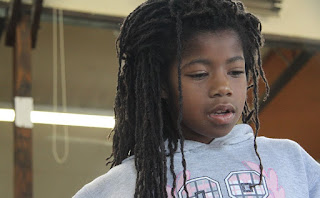