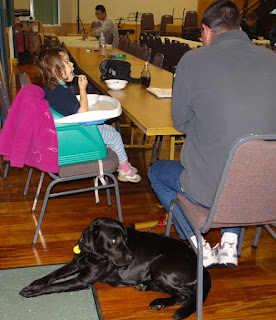 I remembered to take a photo of Shadow in the dinning room. This was at breakfast on Sunday morning, so it wasn't too busy. Our kids are up early, so we are some of the early ones to arrive for breakfast. The other meals start at set times, so it was a very busy room. Shadow was then right under the table and many people (who were even sitting at the same table) didn't even know she was there.

Below: Not long after breakfast Brendon, Asher, Shadow and I headed out for a walk. It was a bit misty out, but we were hopeful that it wouldn't rain. The other kids were all happily playing with their different friends. It was a nice change for us with Asher, at least we could keep our shoes dry on the road (rather than walking on the wet grass). 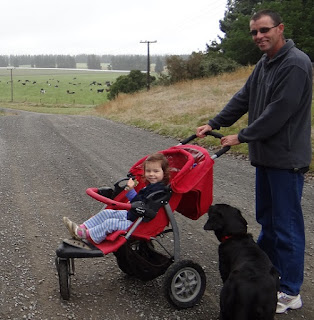 I keep a little bag of food in the pram for Shadow, so can let her off lead. As soon as I call her food name (Sha-dow - splitting the two syllables) she will run over to us. 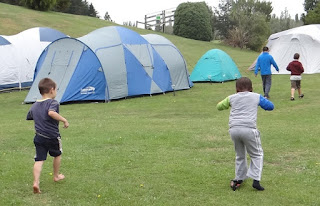 There were a few families who came our for the day. So Hezekiah had a new friend for the day. They spent almost the entire day together and had so much fun. 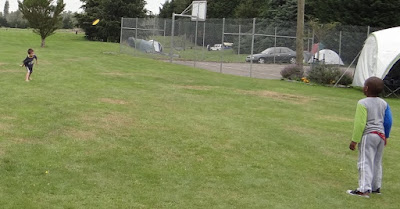 His friend didn't know how to throw a Frisbee, so while Asher was sleeping I gave him a few tips. There were a few of these material Frisbees around to play with, so they had a great time. I got to play with Hannah later in the day and they are really nice to catch (they don't hurt your hand like the old fashion plastic ones we had as children). 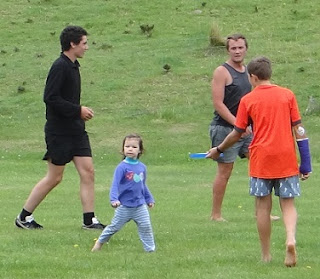 After her nap Asher headed out for more walking. The bigger boys often play some touch rugby or Frisbee soccer on the field and she wanted to join in again today.
The guys are really patient with her and even let her have a couple of throws.
This boy with the broken arm was especially good with the little children. I often saw him with Hezekiah too, letting him sit on his lap or playing together. 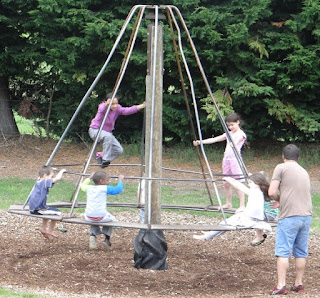 Hezekiah, Hannah and a few of their friends on the merry go around. 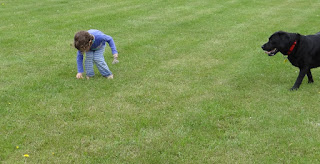 Asher enjoyed picking dandelion flowers as she walked this afternoon. 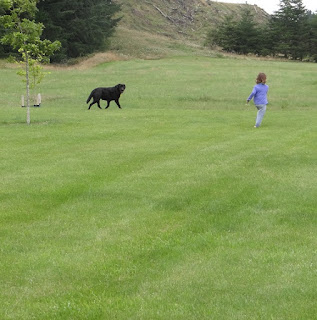 So sweet to have Shadow running along with her. Eventually Brendon had to sprint to catch up to her as she just kept going. 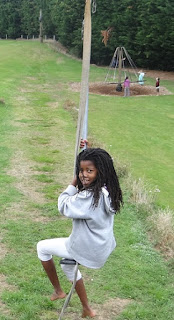 I'm glad I could get a photo of Ruth on the flying fox today. 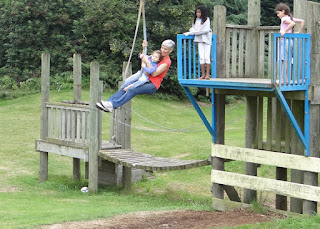 And then Brendon suggested I give Asher a turn too.

Hezekiah and some of the boys enjoying the trampoline later in the afternoon. 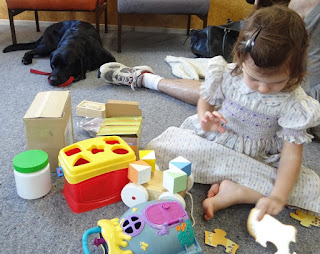 I was so thankful to a friend who helped the girls pack the tent up. Brendon was watching Asher and I was packing and cleaning our room, so we really did appreciate the help. 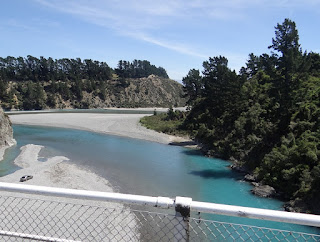 We always love going over the rivers on our way to and from camp. The water is such an amazing colour.
The trip home went really well. Ruth sat in the front with Brendon and I so that I could read to her (we have been enjoying a great series and are onto the 4th and final book now). I put Hannah and Hezekiah in the far back, with just Rachel watching Asher in the middle section. The plan worked and the quieter environment meant that Asher did have a nap on the way home. So I was really thankful for this.

We had a bit of a delay on the way home as a procession of horse drawn carriages was just in front of us. They were only on the main road for a few hundred meters, so it wasn't too long a delay. It was nice to watch them.
Church Camp is always such a highlight for the children every year. I will be honest and say that it was a lot more work with our FAILSAFE diet and Asher's extra care needs, but it was worth it. It was great to get away and enjoy a change. It's always a blessing to meet up with old friends and make some new ones, as well as being encouraged spiritually - from the teachings and the fellowship.
Posted by Buckland at 10:00 PM