Preschool and school for the first time 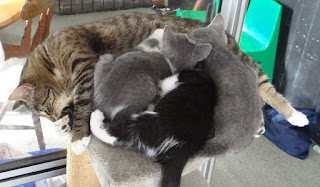 Monday 1st: What an odd place to feed the kittens - on the very top of the cat tree. Puss is not that interested in having them feed any more. So it won't be long before they are weaned. We have found homes for the 2 males, and they will go to their new homes on Wednesday.

Below: Monthly children photo for February.

Whenever Brendon and the girls get ready for Karate, Hezekiah gets his gi out and gets dressed too. He knows he can't go with yet (they only start at 5 years old), but he enjoys joining them in this way. He is learning a bit from Brendon and showed me a punch today. Note how his left hand is "upside down" the way it should be. He is learning that well. 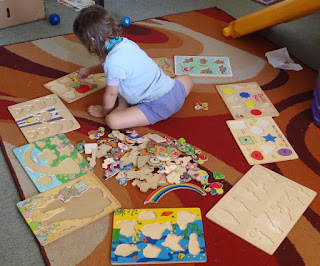 Tuesday 2nd: Asher hasn't done this in a while. She tipped out 10 puzzles and diligently worked through all the pieces.

We were pleased to get down to the pool with the kids this afternoon. It's been a bit wet over the last couple of weeks and next week dancing starts up for the girls. So it's going to get rather busy in the afternoons. 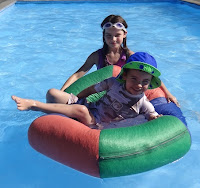 Rachel has practice twice a week this year. So she dances on Tuesday before St John and then all 3 of them dance on Thursday.
School starts up this week, so it's nice to have the slow adjustment into "school term".
What fun to be able to borrow this from someone for a bit of a play. 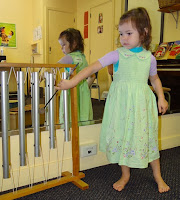 Wednesday 3rd: Asher had her first Wednesday session at Champion Centre today. She has an extra hour now (starting at 9am) and has 5 therapists (rather than the 3 from last year). 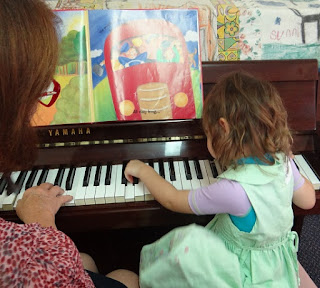 It's going to be a bit of an adjustment to the new therapists. She has done really well already though. She especially enjoys her one-on-one music session. She loved playing the piano with Ali. 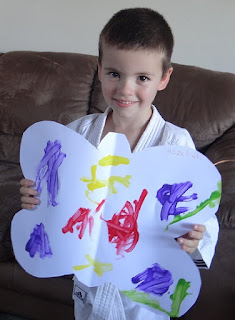 Hezekiah got to enjoy his first day at Preschool today. It's lovely that he can have a wonderfully stimulating morning while I am out with Asher. The teacher was really impressed with how well he did. She normally recommends the children come at least 2 days in the week (of the three they are open) as it helps them "settle in". I think she saw today why I was confident that one day would be fine for him. She mentioned a number of things that stood out for her, like him bringing someone inside who had hurt themselves and telling the teachers what had happened. When I told Brendon he just smiled and said "he is home schooled, we would have expected him to fit in well". :-)
Hannah joined us today at Champion Centre, as it will be her last day for a while to be able to. We had a meeting with the principle of the local school this afternoon and she will be starting school there tomorrow. She is really excited about it. 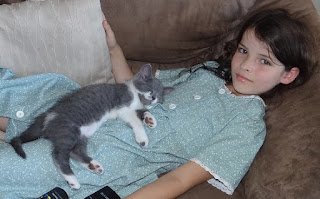 At the beginning of the week (with school starting) I had a challenging morning with Hannah. She wouldn't even eat breakfast - let alone do school work. I eventually asked Ruth to watch Asher and I just spent time praying in my room, begging the Lord to help me to know what to do.
I believe He answered by giving me the idea of sending Hannah to school. I know clearly that it is direction from the Lord as I have so much peace about it. As well as the fact that Hannah is so positive about it. I am confident this is going to help give me the bit of extra breathing space that I need through this difficult time. And I am also hoping that it will help Hannah through the difficult time she is going through. 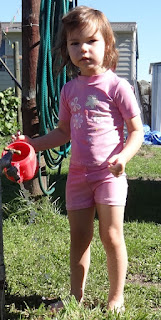 I have read before about how siblings of children with special needs can have behavioural problems. It was hard for me to accept that this may indeed be the case with Hannah. On reflection I realized that she is at the age that she would be most affected though. The older girls are confident and established in their routines ect. Hezekiah is young (and Brendon say's "he's a boy") so he is relaxed and just goes with the flow. 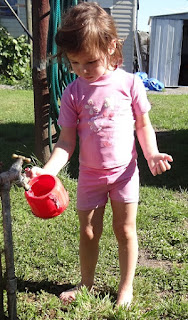 It has been good to chat through these things with other mothers. It has helped me to understand why I feel so bad about this all. As mothers we just always want the best for our children. I was tempted to feel guilty that Hannah was struggling. Tempted to feel that I had failed. I have had to keep reminding myself that I am doing my best. And the reality is that Asher needs the extra care and I can't change that.
So it's been a time of growing and learning for me.
While we were at the school for the meeting, Asher had a Tonic Clonic seizure. Brendon had taken her and Hezekiah outside as Asher was getting restless being indoors. He came running over with her to get her out the heat. Thankfully it didn't last too long. Under 2 minutes (difficult to time as he just wanted to get her inside). 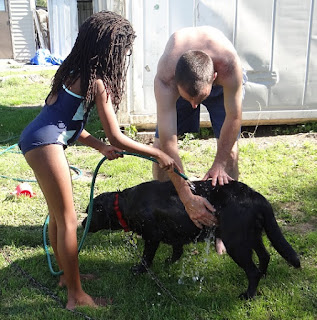 It was still very hot when we got home from the school. Shadow was struggling with the heat too. So we decided it was a good time to give her a wash. Ruth had to "wash a dog" for one of her brownie badges, so it was a good excuse to get it done.
Asher had a nice sleep after the seizure and was more than happy to head outside to cool off and have some fun with water. 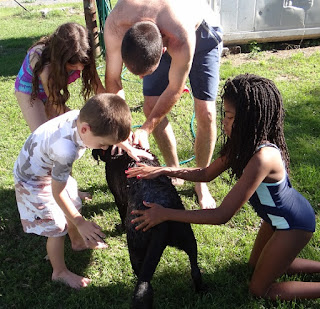 Shadow enjoying a nice rub from 4 pairs of hands.
And then the kids enjoyed a bit of fun with the water. 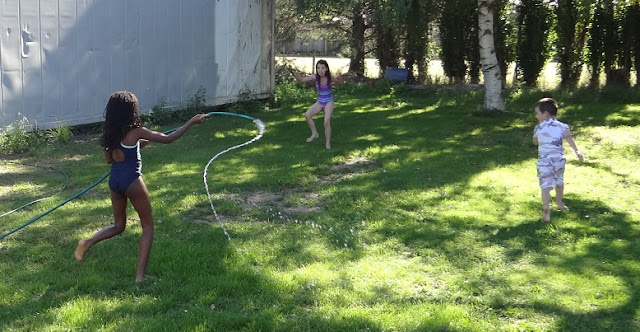 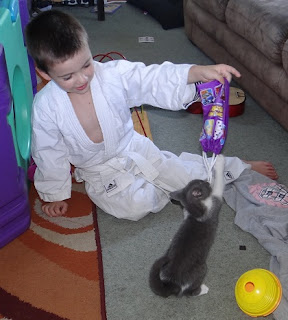 Hezekiah in his gi again as the others head off to karate. He does love playing with Little Miss. She needs his attention more now that her brothers have left. 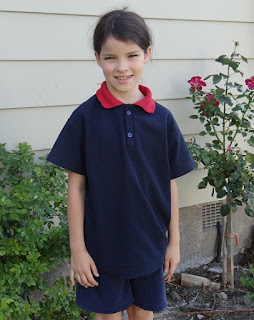 Thursday 4th: What a big day for Hannah and me. My first day having a child in uniform and heading off to school. 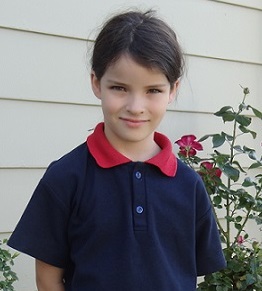 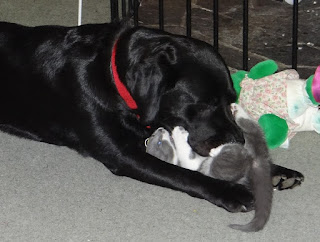 Shadow is getting a lot of attention from Little Miss now. She is very good with her and very patient with all her kitten antics. 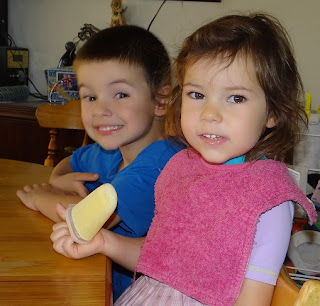 Ruth took the photo above and the rest of the photos for this post. 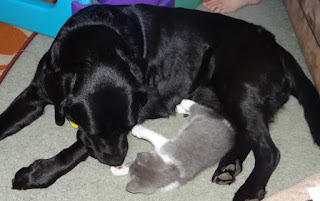 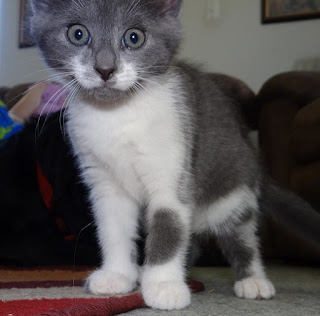 What a pity she cut the ears off. It would have been a stunning photo. And it's so striking that I couldn't leave it off. 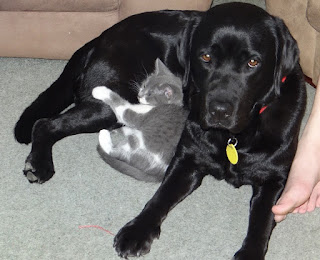 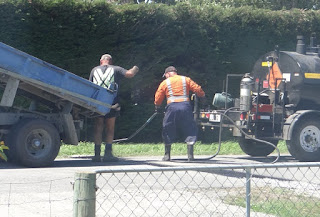 They laid a new water pipe under the road there a couple of weeks back. They have finished the work on the other road now too - so they came around to properly seal their patch. Ruth enjoyed getting to see how they do it. 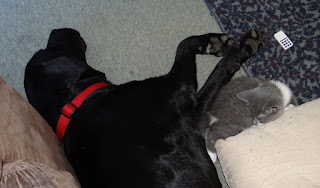 Sleeping peacefully together. :-)
Posted by Buckland at 10:00 PM