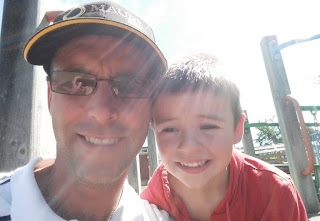 Sunday 14th: Brendon and Hezekiah at the park. 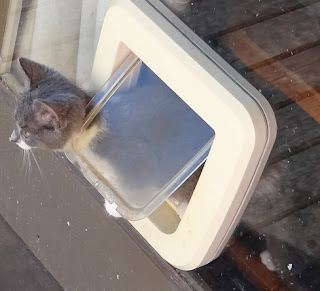 Monday 15th: Everyone was so pleased when we saw Little Miss using the cat flap on her own. And that she can come back in easily too. Now to just teach her to use the sand outside rather than her litter box.

Ruth and Hezekiah enjoying the warm morning to do some painting outside under the shade of a tree. 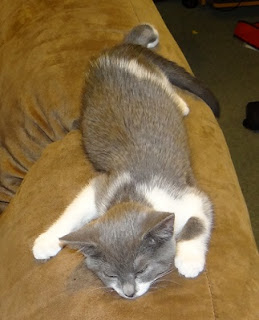 Tuesday 16th: Little Miss is so cute. She just loves lying on the top of the chairs. Spread out so much. 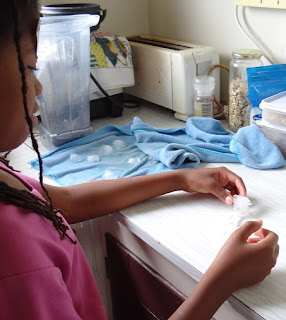 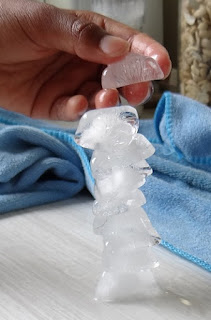 Wednesday 17th: Brownies and Guides starts up again today. Thankfully it's moved to a Wed from a Thursday as Ruth now has dance on Thursday.
She is pleased that she will be able to attend Guides this year. I just have to adjust to having 3 afternoon / evenings of travelling. 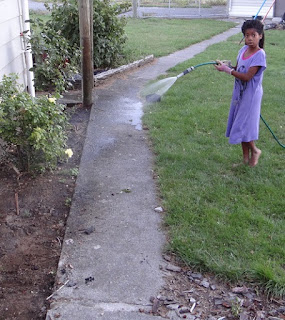 She had one last thing to do for her very last brownie badge. Stacking ice. Not as easy as it sounds, but once you have worked out how to do it - then she said it's easy and fun. She managed to get all the way up to 13 pieces.
Thursday 18th: On the way home from dance this evening we stopped in at the Love's to pick up our eggs. I asked if she happened to have some plants to help Ruth out with a new Guiding badge. She has to plant something and give it away. So she was able to get a whole collection of little seedlings that she planted this evening - as a gift for me. They are beautiful flowers (white and purple - my favourite) so I do hope they grow nicely. 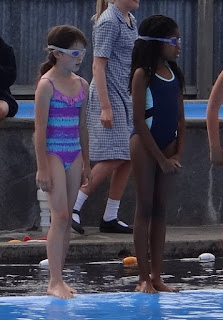 Friday 19th was the Junior School Swimming sports. Ruth was able to join in, so that was nice. It was a bit chilly though, so it wasn't too pleasant for the children.
This week and next the school had swimming lessons organized as part of the curriculum. Thankfully a company had sponsored the lessons, so they were highly subsidized. I called the school to find out if Ruth would be able to join in with the lessons, and they were more than happy for her to join. What a blessing.
Both girls are learning so much from the lessons. Hannah has especially made wonderful progress over the last couple of weeks with all the swimming. She is putting her head under the water - which is huge for her. Because of overcoming that fear - she has been able to jump into the pool and do so many other fun activities. Even with the swimming sports today I was just thrilled to see Hannah putting her head down into the water and swimming (I just happened to take the photo below when she lifted her head).
Unfortunately we have been having some real bad behaviour from Hannah over the last couple of weeks. It build up so much this week that I was again desperately praying that God would help me on Friday afternoon. I just could not understand things. When she got home on Friday she was acting the way she would if she had food that she reacts to.

Again I think the Lord answered my prayers by directing my thoughts to the answer. The chlorine! I wrote to the FAILSAFE facebook page that I am on, to get some feedback from other mothers and to find out if it was the chlorine that was causing it all. I had over a dozen mothers telling me how they have the same thing with their children who are very food sensitive. Thankfully it didn't stop there and they gave me some ideas of how to help Hannah. So for now, once she gets home from school next week, she will immediately have an Epsom salt and backing soda bath. These will help neutralize the reaction as well as wash off the chlorine. 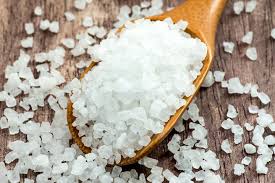 Hannah's teacher has said that she is well behaved at school, so I even asked the other mothers about this. Could it really be a reaction, if she was fine at school and then just fell apart once she got home. I had many mothers describing the exact same thing with their children. And since then I have spoken to another mother who says her daughter was like that as a child and her husband says she is still like that. While around other people, they keep everything together and all the tension just bottles up inside. Then once they are home and in a safe environment, they relax and then all that tension just explodes.
I am so thankful that I have been able to learn from others and understand this all a bit more. It was a rather stressful week and I was so thankful for the hope that the Lord gave by the end of the week.
(Note: A week later, 26th Feb, I can say that it has worked. Hannah is doing so much better. All the issues we had in the first weeks of school are gone and we had a really easy week. I thank and praise the Lord for answering my prayers for help.)
Posted by Buckland at 10:00 PM