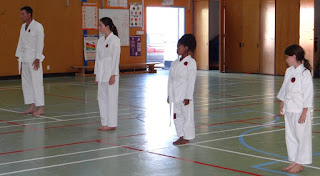 Saturday 20th was a very busy day. Assessments started at 10 this morning.
Brendon and the girls headed up at 9:30, and then Hezekiah, Asher and I walked up at 10 with Shadow. It worked nicely having the pram there, as Asher sat happily watching them for a few minutes. She enjoyed even trying to copy some of their moves. 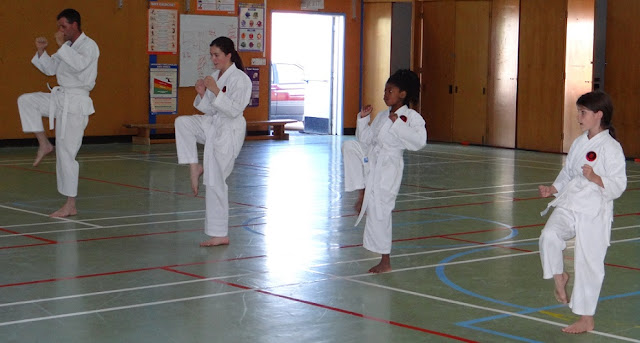 I am so late in writing this blog post, that I can even give the results. All 4 of them got their blue belts. So they all skipped white tab. We were really impressed that the younger two got their blue. There was disappointment that Brendon and Rachel didn't at least get blue tab (they were hoping for yellow). But as it was their first assessment, we need to be a bit patient. They did all do very well. 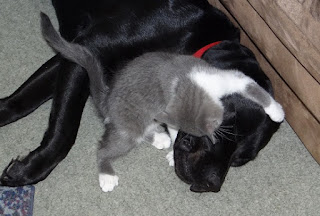 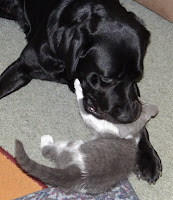 It is so much fun watching Little Miss play with Shadow. I am sure she thinks she is a dog. And Shadow is so good with her and also enjoys it. 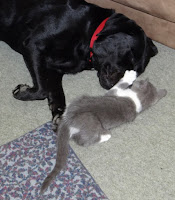 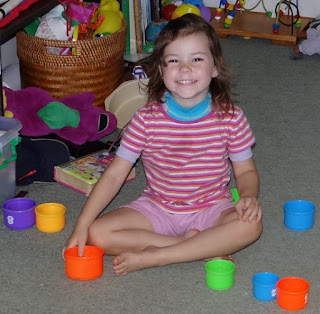 We are sure we have seen Little Miss is "wagging" her tail in joy - just as a dog does. And she lies just like Shadow, with her legs out behind her and her tummy flat on the floor (or chair). So cute.

Asher hasn't played with these cups for ages and then today she just decided they were good fun. When she saw me taking a photo of the animals - she said "cheese" - clearly wanting a photo taken too. :-) 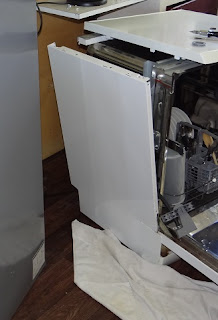 We have noticed water behind the fridge again the last couple of days. A couple of months ago we had the exact same thing happen, and eventually realized it was the dish washer - that the lime build up had clogged the entrance. We were a little unsure as to why it would have happened again so soon, especially as we now have a water purification system for the whole house. But we dutifully opened the machine up again and when to the previous problem area. And it wasn't blocked up. So we put it all together again and then put the dishwasher on so that we could see where the water was coming from.
It turns out the naughty Little Miss had punctured the outlet pipe. Thankfully with some silicone and tape we managed to patch it up. What a performance. We were very glad however to get it fixed. We have gotten so spoilt with having a dishwasher do so much of the work every day. :-) 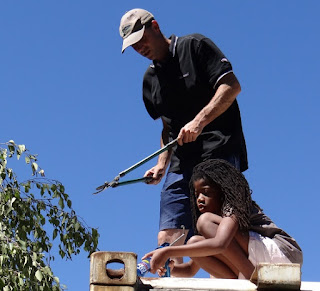 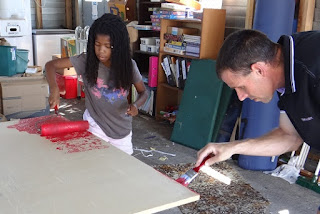 The next job to get started on while Asher was sleeping after lunch, was painting the floor boards for the container. This will help stop them absorbing moisture and just make them last longer. Brendon and Ruth got started. 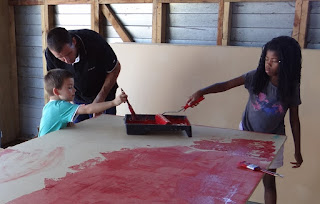 Hezekiah was keen to help too.

The roller wasn't working wonderfully on this first board, so I took over with the roller and Ruth did the edges. Brendon offered to watch Asher once she was up from her nap, so I got to have a change and enjoyed being able to get so much done in the afternoon.

The boards drying so we could do the other side. 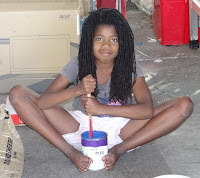 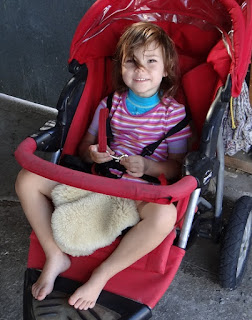 Ruth getting the next bit of paint mixed. We were blessed by a friend who have us a whole selection of bits and pieces of left over paint. This container was rather small, so we said it needs to be held. We offered to help, but she said she could do it on her own. Our little monkey.
And then Asher came out for a while. Strapped in her chair she was entertained for a little while, playing with all the things on the pram (like Shadow's lead and the post key). 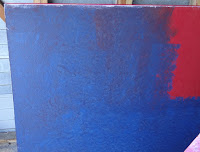 When we went from red to blue we enjoyed the purple effect. The photo doesn't do it justice though. It was pretty to watch the mixing. These boards are going to eventually be under carpet or tiles, so it doesn't matter what colour or combination of colours they are.

And after the blue we moved onto white. 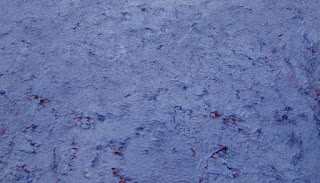 It was especially pretty when we saw bits of the red coming through too. 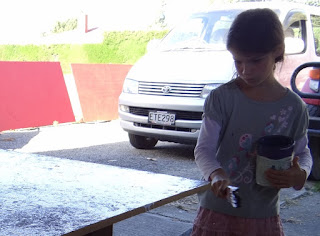 Hannah came out to help a bit too. 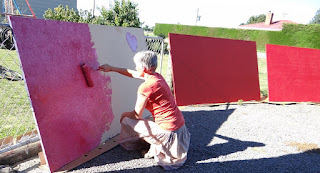 Getting the last one done. We had some red and white left, so decided to use a bit of both and enjoy the mottled pink effect it produced. 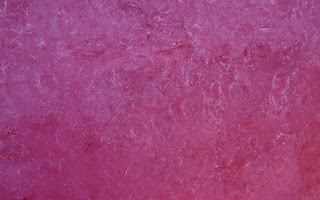 The girls really liked this. It's actually a good idea for painting a room like this. It was really effective. 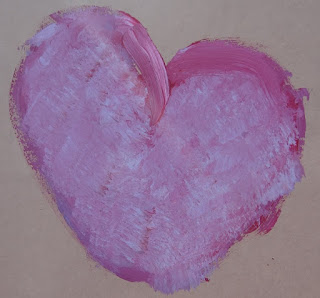 Ruth had some fun with the brush creating this heart. She asked me to try and go around it. 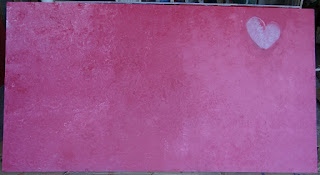 So I did. Ruth worked well through the afternoon and I was really pleased that we could get them all done. We do still need 3 more boards. So once we get those we need to cut and pain them. It was a big job done today to get these first 7 finished though. 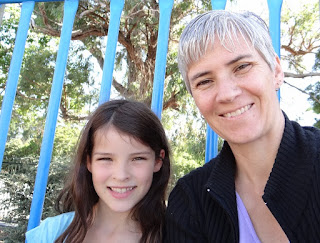 Sunday 21st. Hannah and I headed up to the school play ground today. She showed me some of the games she plays at break. We had a good time chatting.

Today also saw my Sunday mornings open up again. I used to go to training with Shadow, but have had to re-look at the finances lately and could just not justify the weekly expense.
A few other things have happened over the last couple of months that eventually culminated in us discussing the possibility of driving into town for church again. 6 months ago we didn't even consider it as travelling was really hard for Asher. I have seen such great improvement with her though over the months with our weekly trips to Champion Centre. 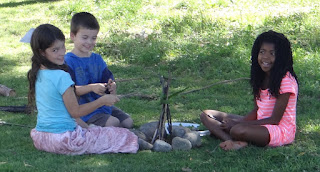 I did try to attend the local church that Brendon and the older girls went to on Sunday nights. It was however too much for Asher and eventually I had Hezekiah and Hannah home with me too each week. So with these and a few other things being worked out mentally for me, we discussed different church options and made plans to visit a church next week. The children are all excited and it will be especially nice for them to have Sunday school classes that fit each of their ages.
In the afternoon these three had a fun imaginative game going on in the garden. :-)
Posted by Buckland at 10:00 PM