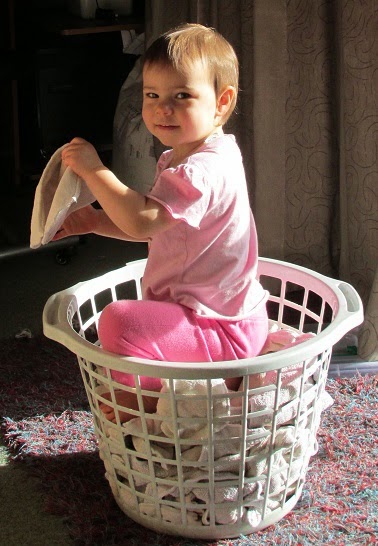 The 4 older children were up early for breakfast on Tuesday morning and Brendon headed off with them just after 6:30 to get them to the airport with Michelle for their flight at 8:45. He was back home by 9:30 and the children landed in Auckland just after 10 (amazing how quick flying is). It was nice to get to chat to Michelle in the afternoon and hear that the flight went well. Hezekiah had a bit of a struggle after the flight with all the new things, but it was, I am sure, aggravated by tiredness from the early start. It was nice to know he had already adjusted and was already having a great time. Brendon and I then got our packing done by lunch time so that Asher could go down for her nap, as her cot is in our room. We then got the hand luggage sorted and even had time to watch a program and enjoy some popcorn. I had felt so strange leaving our packing to the day we left, but had more than enough time. I am not used to a quiet house with just one child to care for. I was thankful that my energy levels were back to normal as I had been quite concerned yesterday with how drained I was feeling and now having to face over 30 hours of traveling.
I even got the last load of washing done that I had planned for the morning (Asher's nappies). She found a different way to help me today. I made some bacon and cheese wraps for our on-the-road-dinner and only had a couple of dishes to still wash when Steve picked up up to take us to the airport. 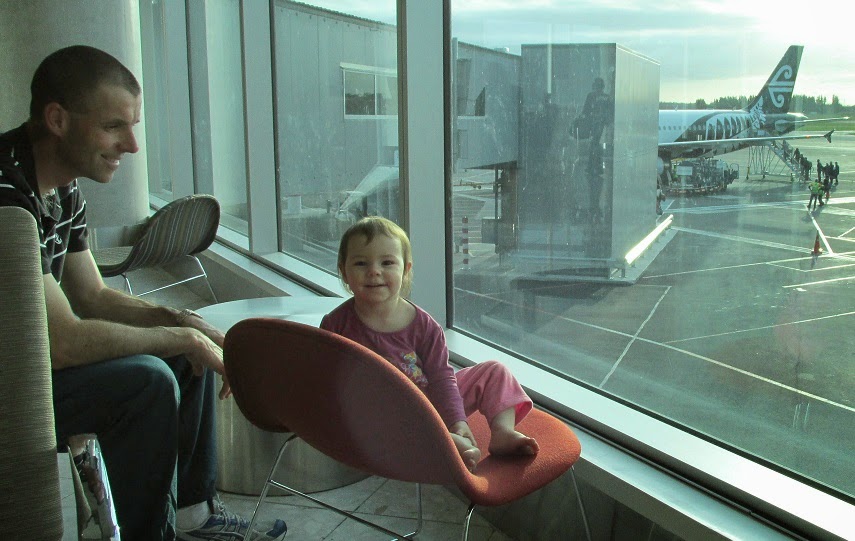 Asher had fun climbing on the different chairs at the gate while we waited for our first flight up to Auckland which left just before 8pm. At 7:30, her normal bedtime, I got Asher to sleep in the sling (picture below). We had hoped she would just be able to sleep through this flight and even through waiting for the next one. It was not to be though as aviation laws state that everyone must have a seatbelt on. We had hoped we could just get her seat belt on in this position but the air hostess said that she could not be in this position. We tried to get it on without waking her, but with adjusting her position she woke up. She did not enjoy being woken and the air pressure change that must have hurt her ears. 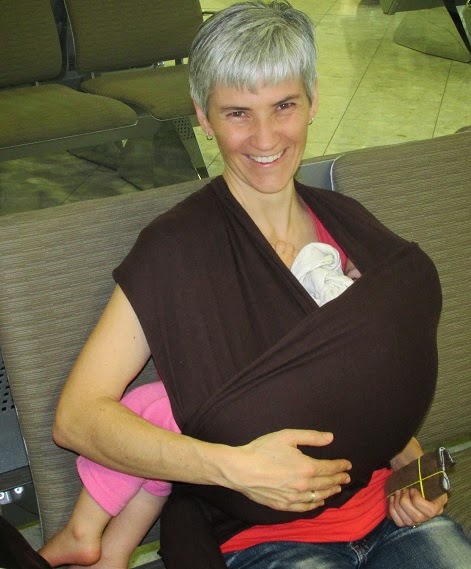 Thankfully she settled once we were in the he air but she joined all the other children on the flight with crying on the decent. It must have been worrying all their little ears.
I was really thankful to have this first flight over with and know that even with being so very tired, the flight itself did not cause any seizure activity. We then had a mad rush to get to our next flight. The air traffic controller had made our first flight wait to land as we had arrived early but ended up landing later than expected. We should have had an hour and 15 minutes between the flights but the next flight was doing a final call 20 minutes early. Thankfully the airport bus arrived just as we got outside, to take us to the next terminal, and then we almost ran to our next gate (not a full on run as we didn't want to bounce Asher too much). To add to this they print random checks on the tickets to do extra screening and my ticket had been selected. They said they would let the plane know that we were on our way, but it was not nice to hear our names being called out. Brendon said it sounded like they would be taking our luggage off the plane if we didn't arrive soon. So it was a mad dash and rather stressful.
What made up for it though was that the plane was not at all full and this made the flight a bit easier than it would have been if every seat was taken. It was good to have a bit of time to just relax and walk around before the next long flight to Munich. Brendon had reminded me a week or so ago about how I had collected fridge magnets on previous holidays and so after that lovely landing experience I thought it would be great to have a Los Angeles magnet and found a lovely one at one of the shops. I wish I had been more active with my camera through the trip, and one photo I wish I had taken was just before we boarded the plane. They had asked people in different rows to line up in different places, so while Brendon was in line with the hand luggage, I was walking with Asher. As she walked down the line she spotted a lady with a lovely big hat. She made a bee line for her and did her normal friendly "hi" and put her arms up to her. The lady was so friendly and when Asher reached for her hat, she said she could take it. So Asher wore the hat for a while, walking up and down the line smiling at people, looking absolutely adorable, and bringing smiles to many faces. I was pleased that when I told her to take the hat back, she did and did not throw a tantrum at not being able to keep the hat. After a while of waiting they said that all the families with young children could board first. So I quickly got to Brendon and we headed on. We had our tickets checked and then walked past about 4 or 5 police men. Once we were past them (and out of ear shot) I said "that was intimidating" and the lady next to us said "especially when you are from SA or Zim". So we got chatting as we walked and eventually I guessed she might be the lady going to the conference that we knew would be on this flight with us. She was, and she was seated right next to us (on the middle bulk head) and her daughter (who we knew would be with) ended up being just a week older than Asher. 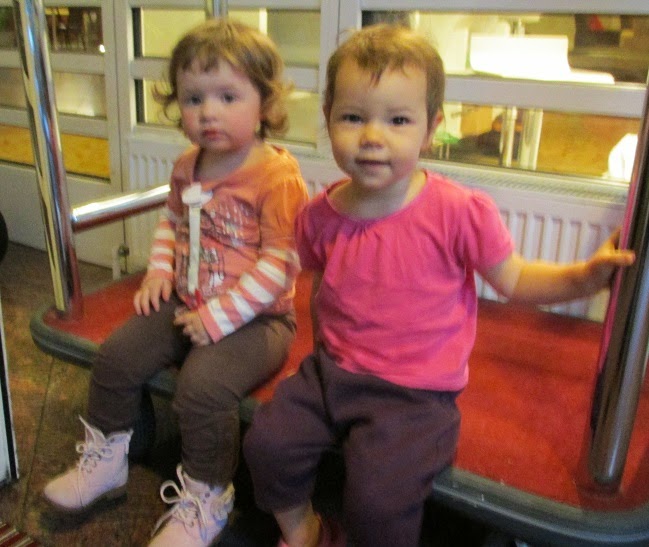 Shirley and Asher got on so well and I was upset that most of het he flight had cabin lights off, as I missed getting a nice photo of them. I quickly got this one as Shirley left with her grandparents the next morning after breakfast. Unfortunately the flash didn't go off and the quality is not great, but it's a very special part of the memories of this trip. I had hoped to get Asher to nurse for take off, but she decided it was time for milk as soon as we started taxiing. By the time we actually got to take off she had drank from both sides and didn't want to nurse any more. Thankfully she didn't seem to struggle with the take off, so we were very thankful for this. The flight was again not very full and so Shirley and her mother immediately moved the the row behind us which was empty. Brendon spotted just one more empty row further back and quickly grabbed that for us. We manged to use this for most of the flight too, allowing Asher and me or Brendon to fully lie down and sleep. Not even 2 hours into our first sleep, a man next to us started playing drums with a plastic cup on his table. It was so loud that it woke Asher and I and I could not get her back to sleep. So it was a long flight, with her awake for most of it. (Although this probably helped with getting into the new time zone). Eventually with about 3 hours to go I was feeling really ill. I was exhausted but more importantly, I was starving. They had given us dinner soon after take off (we left LA at 5:20pm local time) and they just saw it as a flight through the night, servings breakfast an hour before landing. This was not helpful for all of us who had so recently just gotten off a "flight through the night". We had all been awake for ages and with it being and 11 and a half hour flight, you can image how hungry we were. They also had no baby food (even though a baby meal hand been booked for Asher) and they didn't even have 1 peace of fruit on the flight. They had a few packets of pretzels and biscuits, but with all three of us off wheat, we couldn't even enjoy that little snack.
Our sleeping row had been used by someone else earlier but thankfully he was up now and so I took Asher so we could get some sleep. It was such a huge blessing to wake over an hour later as breakfast was being served.
Again, there was no meal for Asher, so Brendon and I kept some of our food for her. Brendon was so hungry by this stage that he just ate the bread roll that came with his meal. (At that stage there was nothing else we could do, but I do wonder about that roll because Brendon had a bad headache early the next morning. Thankfully his migraine tablet and a couple more hours sleep did help his head feel better.)
Asher had been woken when I woke for breakfast but she was still exhausted so she slept in Brendon's arms while I had my gluten free breakfast (special requests being brought out first). We only ordered one of these so that the meals would come at different times, this made it easier with Asher. Once I was done Brendon got to eat his. Asher continued to sleep peacefully and I thought I would try to get her to nurse as we landed to help with her ears. She woke crying with the start of the decent though. I got her belt on at this stage and at one point I felt my ears pop. It must have helped Asher's ears feel a bit better because she finally stopped crying for a few seconds and I could get her to start nursing. This helped with the rest of the decent and the landing.
As this post is now more than long enough, I will leave our arrival in Munich for the next one.
Posted by Buckland at 2:00 PM