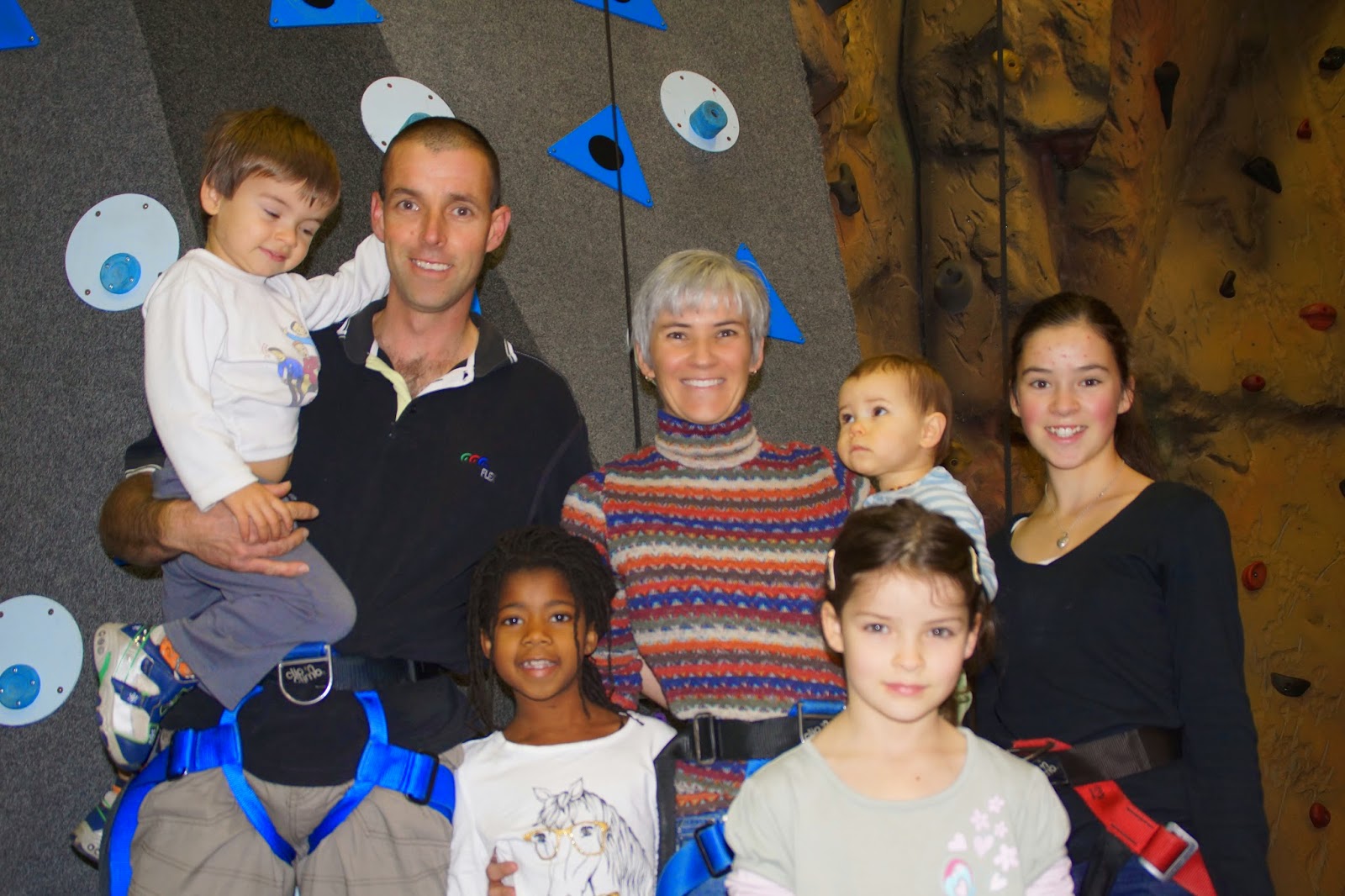 We had a wonderful time at Clip and Climb this morning. 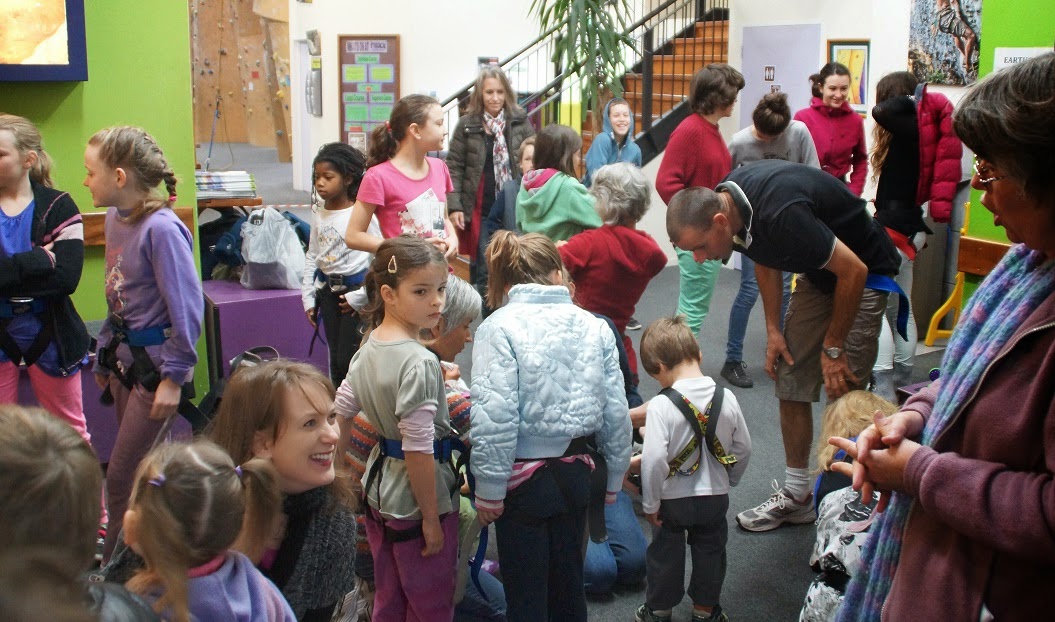 Everyone getting all set up.
We managed to be a nice big crowd of home schooling families to enjoy a group booking during the week (they normally only open in the afternoons during school times).
Hezekiah got a full body harness. 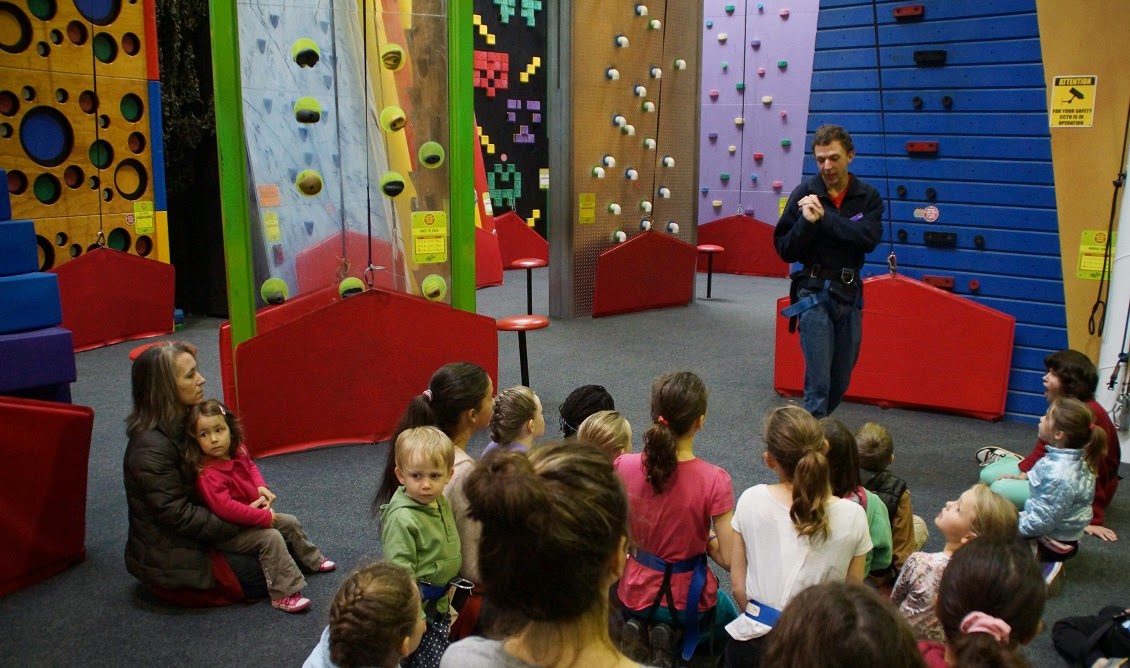 Then it was time to get some instructions.
I am thankful to Leigh Love for most of the photos in this post. My camera battery went flat - so it was really nice to still have a wonderful collection of photos from the session. 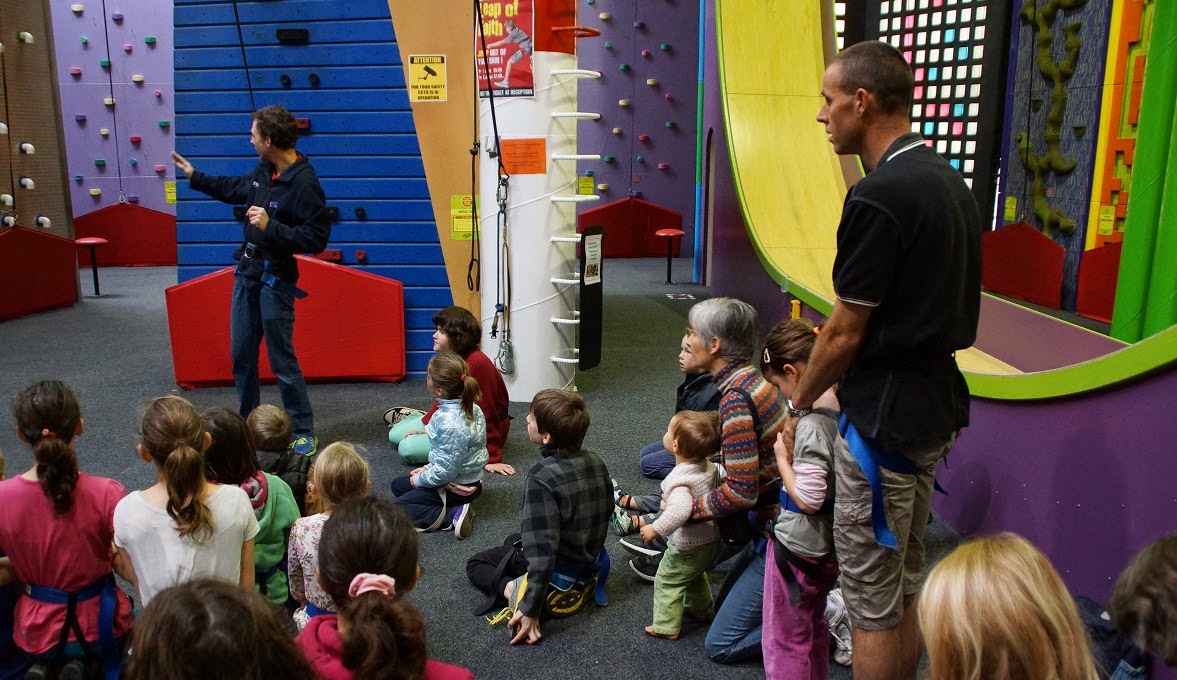 These photos do give you an idea of the variety of climbs though. This will be Rachel's 3rd time at Clip n Clim - so it was nice for the rest of us to be able to get to experience it ourselves too. 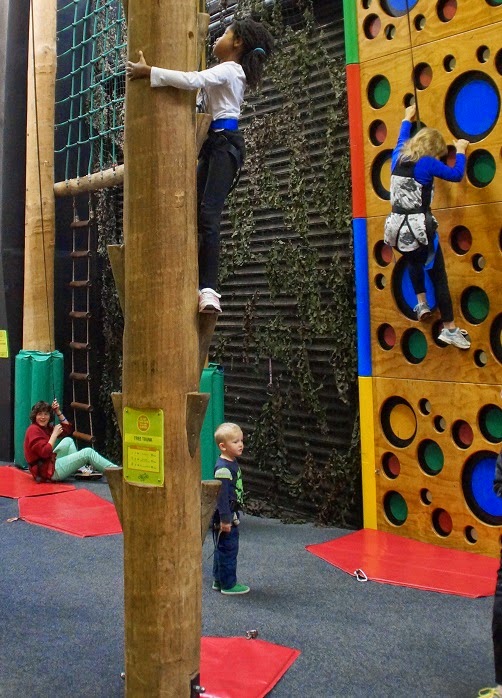 Left: Ruth had no fear and was up and away quickly - with Ruth Love there behind her and David watching on. David is 4 although not much bigger than Hezekiah. You could see how much older he was though in his confidence. I regularly saw him up on climbs - so he did really well too.
Right: Ruth way up high. 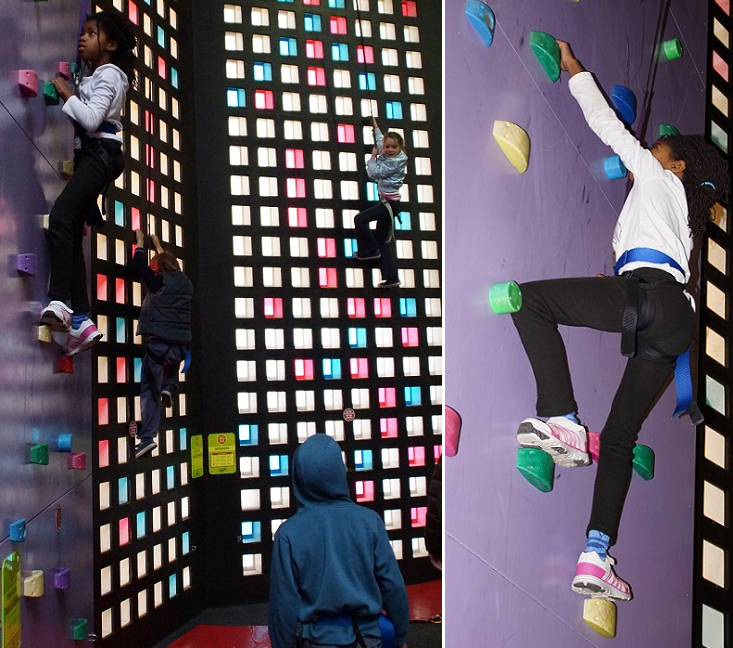 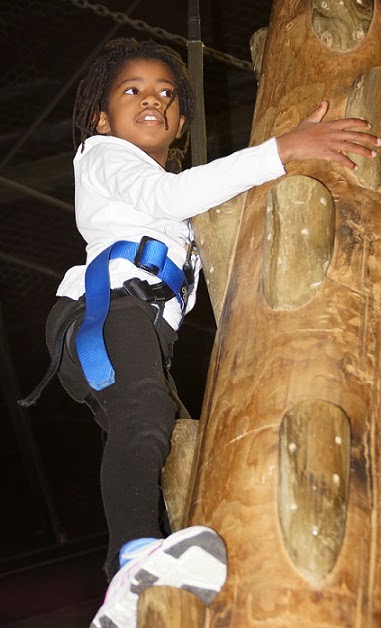 Some more of Ruth. 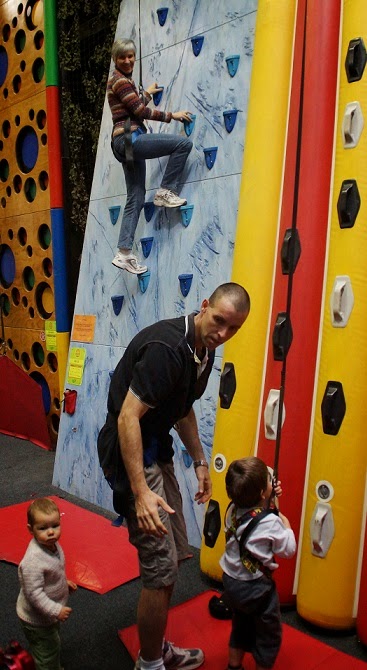 And one with Asher in too. She was there watching everyone and playing with the red mats. :-) 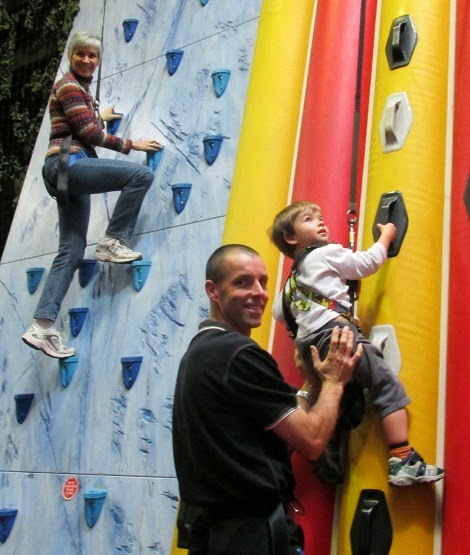 This was unfortunately as far as Hezekiah got on the only climb he was willing to try. He was just not interested at all. Hopefully in a couple of years time we can organize to come again. I am sure he would have so much fun. At this point it was all just a bit too scary for him. They were really good about it and even refunded us for his fee. 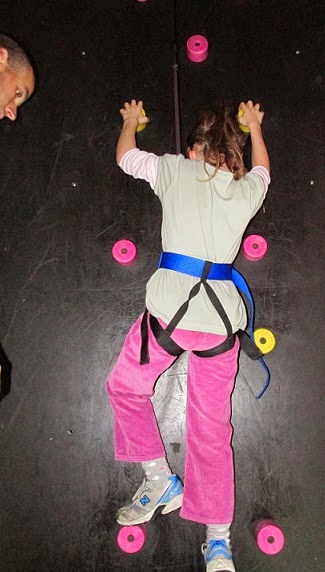 He wasn't the only one who was afraid. After a few attempts we finally convinced Hannah to give this wall a go. She was really nervous. We gave her so much encouragement for just starting. You can see she hasn't got very far and she didn't go much further on this one. 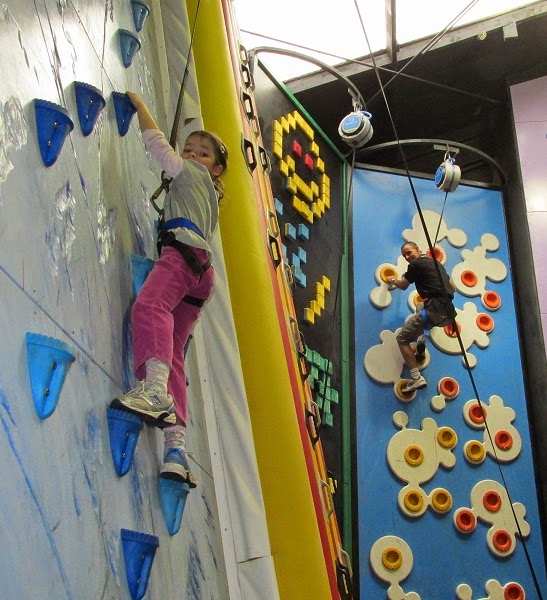 We decided to just leave it and just get a refund for her too if she didn't climb. I think she needed that time of just watching others have fun. She eventually decided to give this one a try. It's a bit easier with being at a bit of an angle. Dad up in the background. 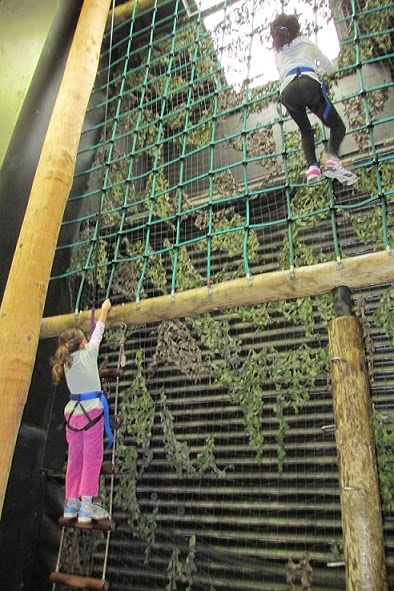 Then she asked to climb on this one with Ruth. It was a bit too intimidating to try get over that section - but she was at least up and trying and getting practice at letting go to come down. This was probably the hardest part for a few of us. 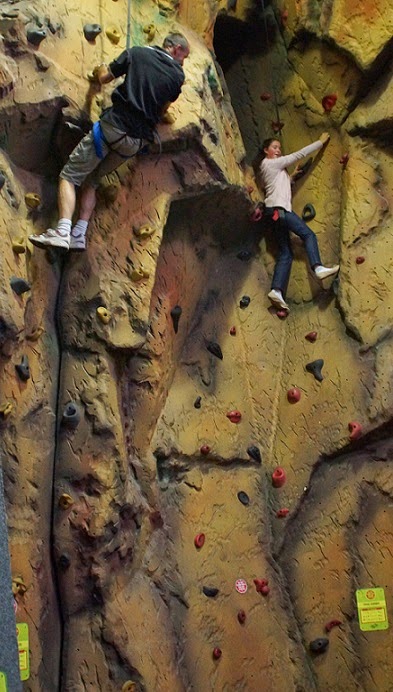 Brendon and Rachel got to try this "real" climbing wall. Probably the hardest climbs in the whole room. Each climb also has different challenges (the yellow card at the bottom gives you details on how to make each climb more challenging). 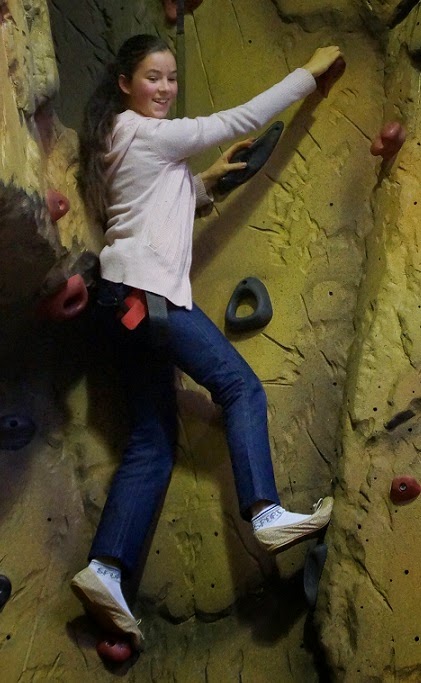 A nice close up one of Rachel. To think the first time she came a couple of years ago she was almost as nervous as Hannah was today. She has slipped on an abseiling course with Brownies way back and it had made her really scared of the coming down. She has more than overcome that fear. I think she was the least worried of all of us about the coming down. 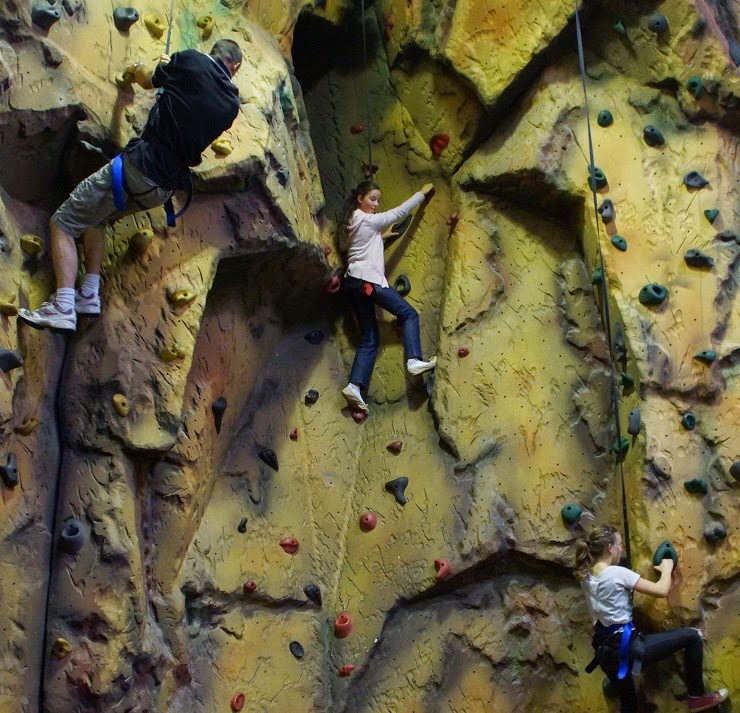 It was lovely to see some other strong talent with the Love girls too. 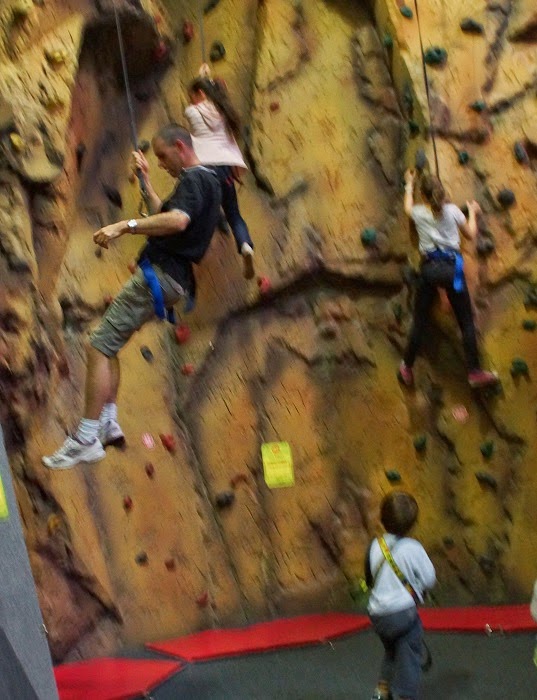 A shot of them coming down. Brendon had his first and only fall on this climb. He was surprised at how quickly the rope caught him. When you come down you push away and it gently lets you down. It's totally different when you slip. A bit like a seatbelt. It can come out slowly but if jerked - it holds tight. Perhaps we all need to have a slip and fall in order to have more confidence on how well it can hold us. I know I was a bit nervous with each climb I tried to do quickly - as the thought of slipping and falling was quite daunting. 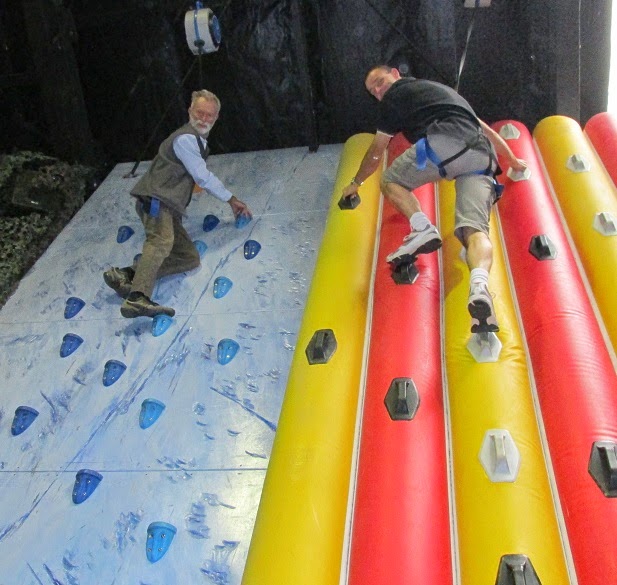 It was nice to have some Dad's along to join in the fun (nice that Brendon wasn't the only Dad there). Here is Leigh and Brendon way up top. 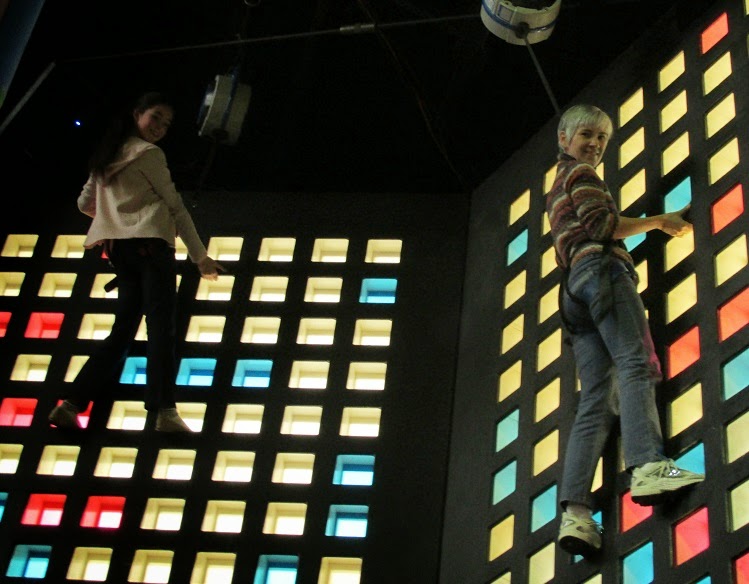 Rachel and I had a race up these ones. I found it really hard because the grips for your hands are underneath. So I was very slow compared to Rachel.
Below: Rachel was looking forward to Brendon and I having a race on this see-through wall. You can see I was very slow in getting out the blocks. I also eventually found it quite hard because the whole wall was shaking a bit with the speed at which Brendon was climbing.
Loads of fun for the children to watch though. Hopefully when the children are older and we come again, I can get a bit more practice and overcome a bit of my nervousness. 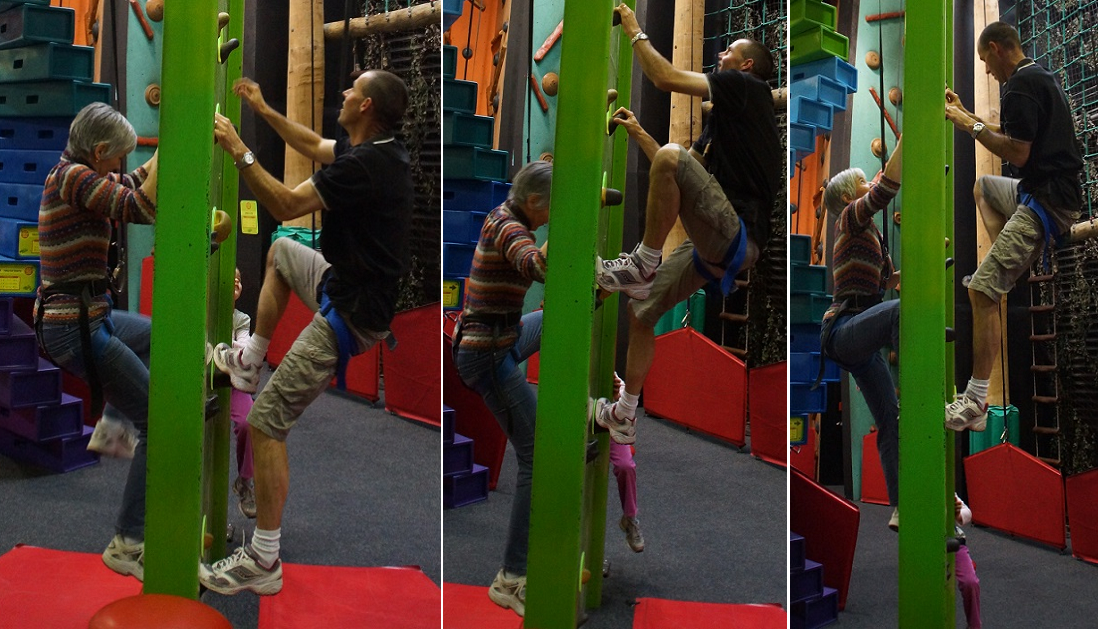 And yes, I chicked out eventually and didn't even get to the top.

Having a go on the skew wall. It was a really strange feeling. 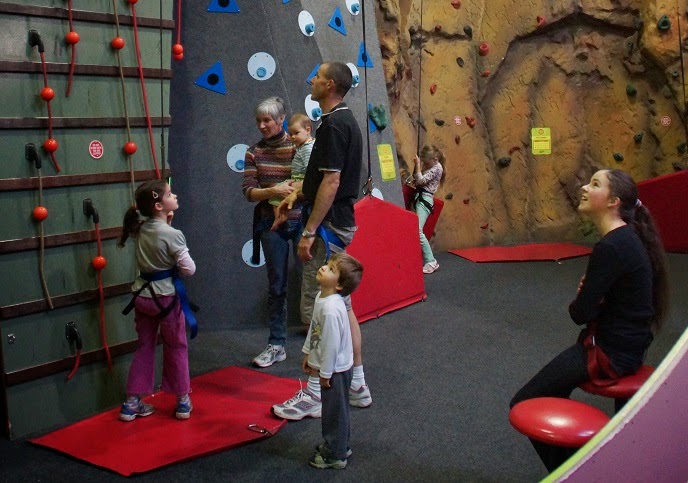 Ruth and I enjoyed this climb with the balls on the ropes. It was the fastest one I could do. 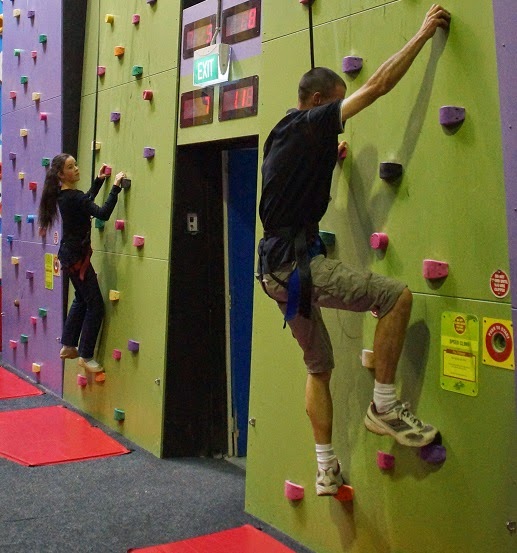 Then it was time for Rachel and Brendon to have a few races up these walls. There is a button for each person to push as they start and there are 4 walls that are done the same. Brendon was really fast but even he got beaten by Julia. She flew up. 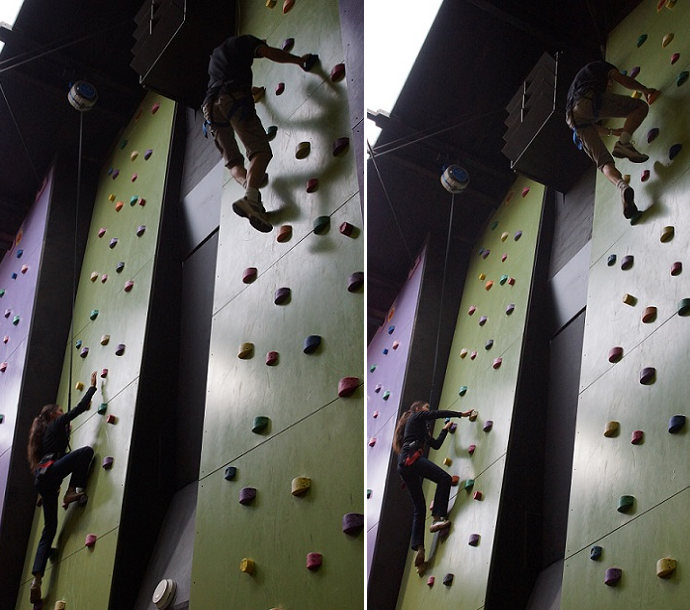 We were amazed to hear that the record was under 4 seconds. 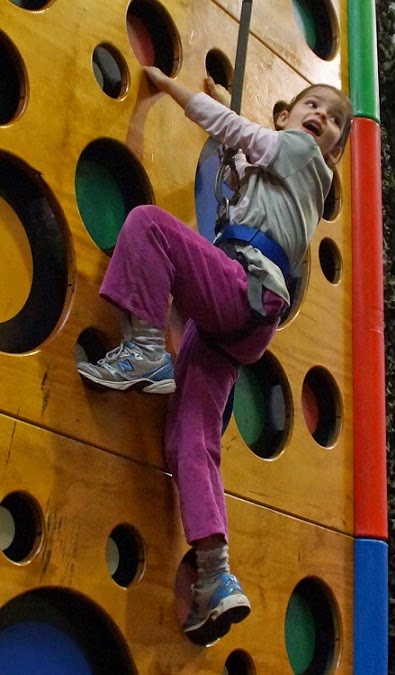 Hannah's last climb was this fun dot one. Here she is calling Dad to see how high she had gotten to (I had encouraged her to reach the line at the top of the red border).
She continued to get to the next line too. Well done Hannah. You not only overcame your fear but had fun today too. I am sure at the next visit she will be going all the way to the top. 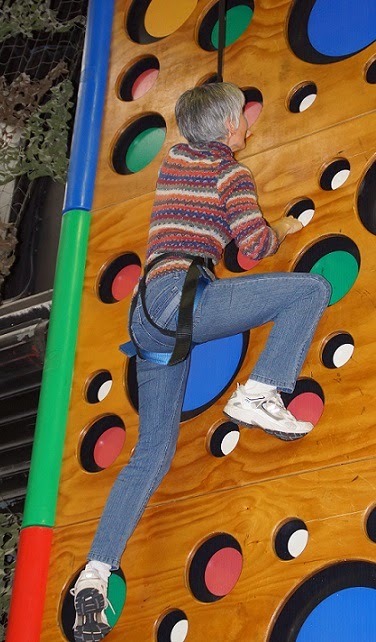 I had my last climb on this one too.
And Rachel's last climb was on this one that looked like big lego blocks. :-)
We had a great time and look forward to visiting again some time in the future.
Posted by Buckland at 11:00 AM