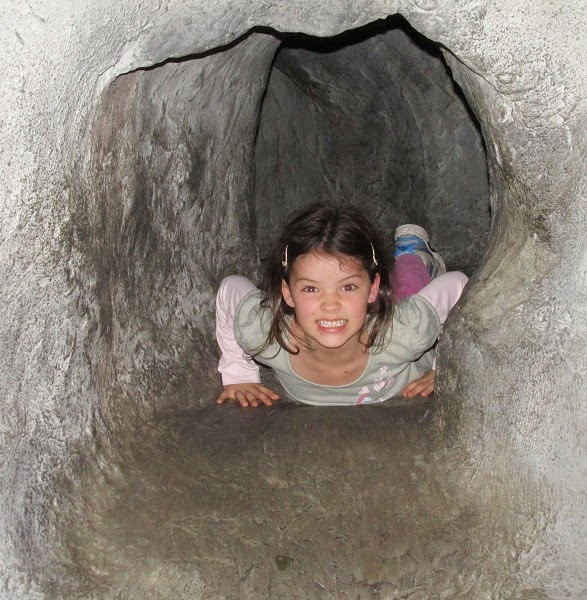 When we told the children we were planning on visiting the museum after lunch (as we were in town anyway for Clip n Climb) the most excited person was Hannah. And the reason? She wanted to go in the tunnel again. :-) So as soon as we arrived she made sure she got some time going into the dark cave and coming out through the tunnel. Hezekiah was not at all worried about the dark and neither was Asher, who happily walked in without a care. Ruth noticed the spots they put on the ceiling this time - making it look like a night sky. It is amazing how quickly your eyes adjust though and then there is a nice display to enjoy while in the cave. 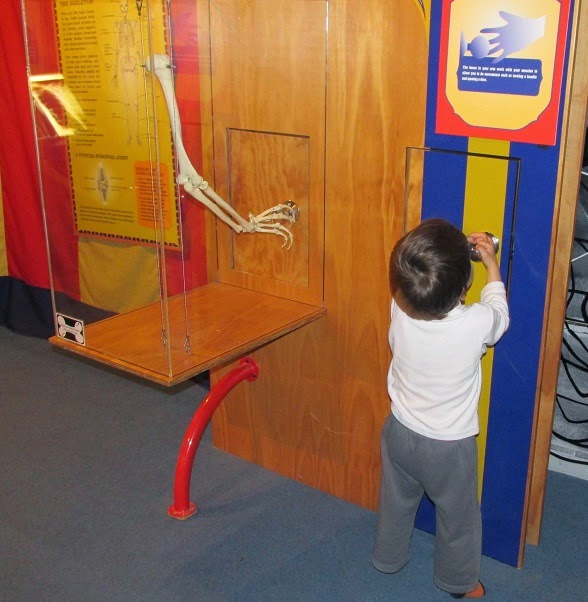 The main reason we headed to the museum was because Ruth Love had mentioned that there was a new interactive body section. So the children had loads of new things to try out.
Hezekiah loved opening this door and watching how the bones moved - copying his movement. It was quite hard though - so he used two hands. :-) 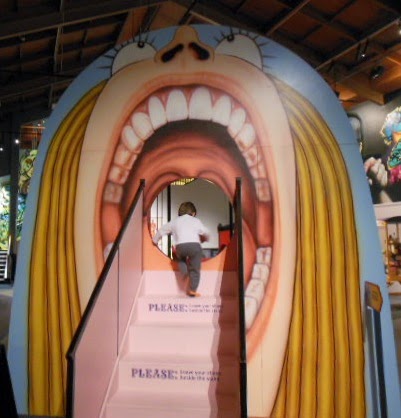 This was a highlight for Hezekiah and Asher - the mouth leading to a slide. 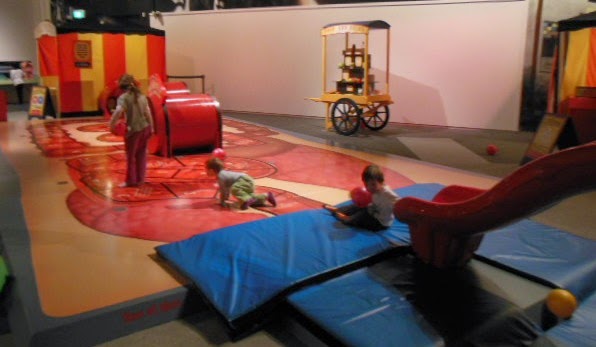 Sliding down the slide (tongue) and then the older girls got to follow the intestines and read a few of the interesting facts that were there (and listen to the sound effects that would play when you stood on the spaces). From gurgling stomach and hiccups to some more rude sounds. 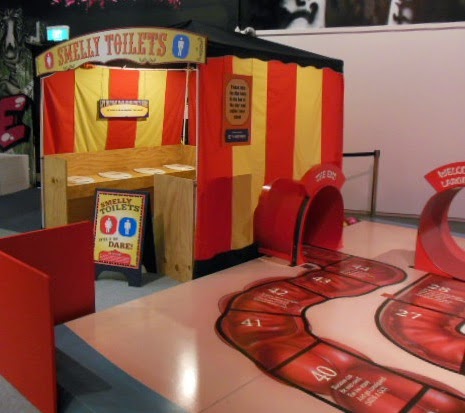 And ending in the "Smelly Toilets". 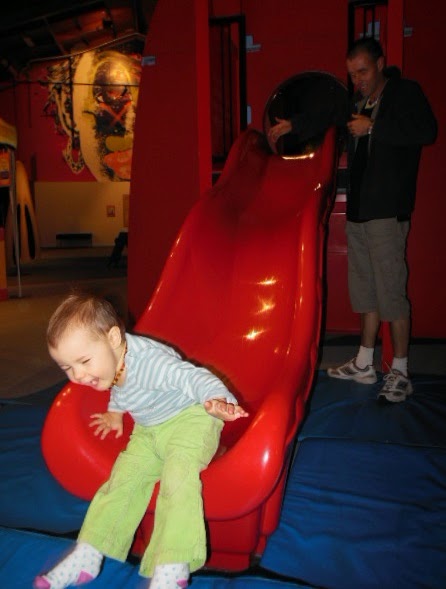 The attraction for the little ones was just the slide. But it at least kept them busy for ages while the older ones got to explore more. You can see how much fun Asher had. And I was surprised when I came to take photos and Brendon told me she goes on her own - all the way off with a soft landing on the mats. So nice that she can have some safe but wonderful tumbling fun. 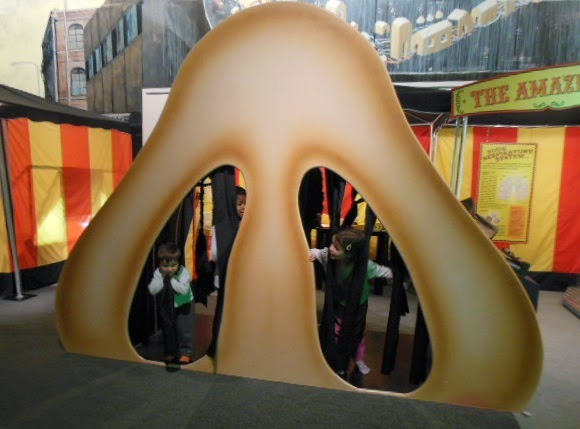 Then the amazing nose. 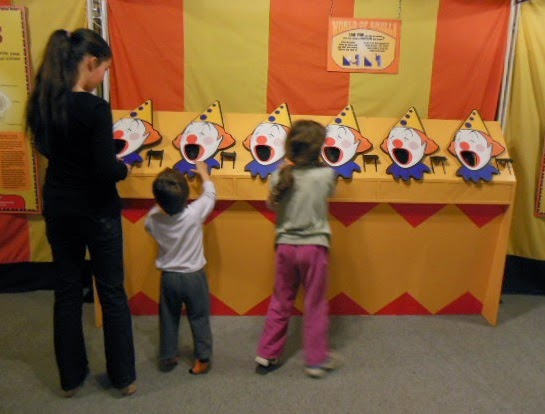 Having fun seeing how many of the items they could recognise by their smell. There was also another one where you had to put your hand in and just feel the item. I wondered how Hezekiah would feel about even trying this but he was fearless and got a few of them right. 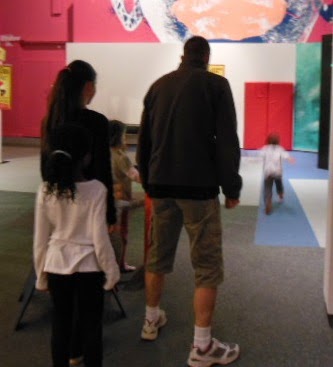 A highlight was getting the family to see how quickly they could run 10 meters. Off Hezekiah goes (left). 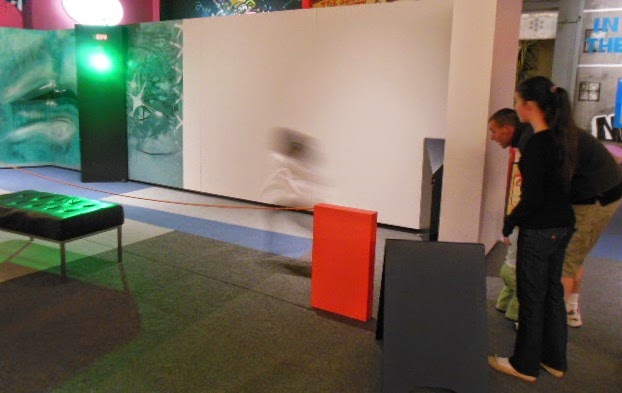 Then Ruth (right). She beat Rachel's first time - so the competition was on. :-) 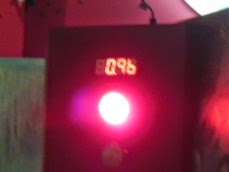 Rachel ended up with the fastest time at .96 seconds - just beating Brendon's .97. They did have cushions to run into on the opposite wall - but they were still rather close so there was no way Brendon was not slowing down before the end. 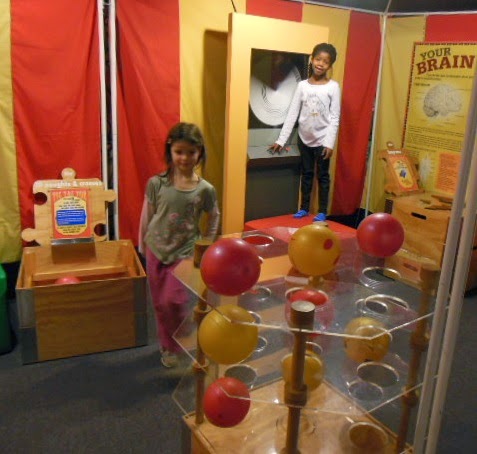 Having fun with the mentally challenging games. A 3 layer tic tac toe was fun and that spinning disk at Ruth only had some black lines on it - but when spinning different people can see different colours. Eventually Rachel, Ruth and I were able to see quite a few colours (brown, green, blue and even red). 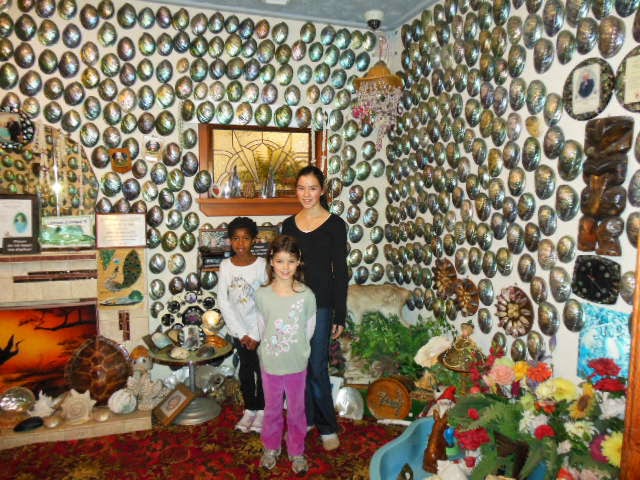 This Paua Shell House was new as well. Fred and Myrtle Flutey had collected hundreds of shells and displayed them around their home. (1,170 to be exact). They had people coming and visiting it for many years. It was lovely to watch the movie about it all and then actually be able to walk into the room and see them all. The husband had polished each shell himself. For all the details you can read about it here. 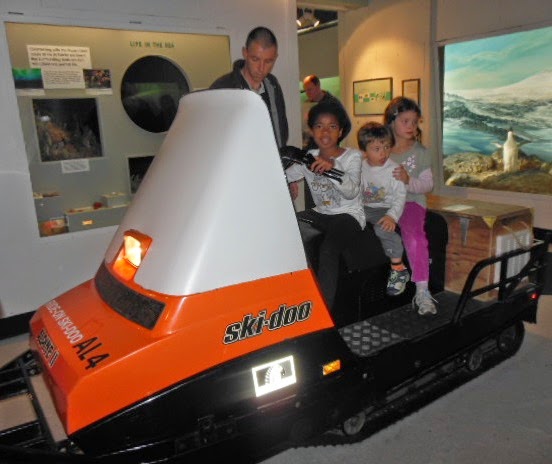 And although we didn't go through the rest of the museum - we had very clear requests to go through the Antarctic display area so that they could have a bit of time on here. 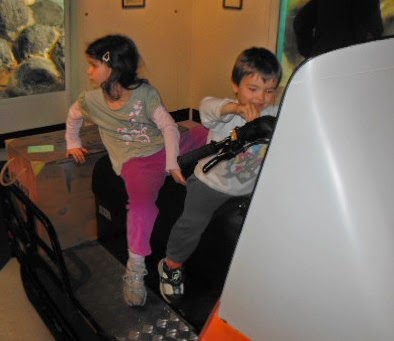 Each one getting their turn to "drive". :-)
We had a lovely afternoon and then topped it all off by having fish and chips at that lovely shop we discovered on our adventures on Tuesday. We even had their number so ordered the food and it was ready when we arrived. It was a day filled with making so many wonderful memories.
PS: On writing this post almost 2 weeks later Hannah is still praying and thanking God for the lovely day (and thanking him for each detail including the fish and chips). :-)
Posted by Buckland at 5:00 PM