Not a traditional Christmas 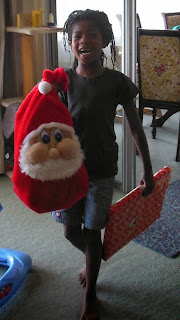 The whole issue of presents came up again this year as Ruth just LOVES getting presents and months before Christmas we hear her regularly talking about "what she will get". Everything within me wants to fight this popular "getting present" focus at Christmas. So for a while I had been thinking about it and eventually said that I think perhaps it would be better to not have presents at all. Nana has given money for the children's gifts and so we decided we would get them one "big" present from Nana and then not do any individual gifts. I really wanted the focus to be on CHRIST and giving rather than receiving. 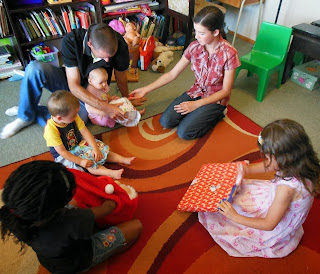 Thankfully the idea was not upsetting to anyone and they just got that in their minds. My mind kept working things over and eventually I decided on a little treat. When Ruth and I went into town with Asher I told Ruth that I would be ok with buying a small gift for each of the children so that they could have at least 1 present to open. We spotted a "sushi making kit" at the shop and I said that could be her present. She was thrilled with the fact that she was the only one who knew about the presents. It stopped her talking about it and helped change her focus completely. 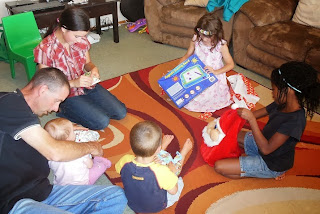 She was excited about wrapping them with me (without anyone else knowing) and the excitement of Christmas for her was GIVING. You can just see the excitement on her face when she brought them through.
I even decided to change things up a bit more and I suggested Ruth bring the presents through to surprise everyone on Christmas eve - after dinner.
It was fun to watch Ruth's face as she unpacked the bag. I had managed to buy her a swimming costume on-line (the shop had sold out of her size and she really needed one) and Rachel's first gift (that Ruth knew about) was hair ties (just those practical gifts that they would have gotten anyway). 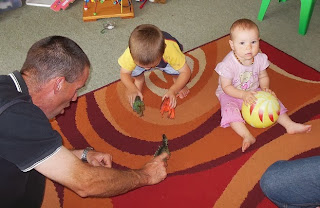 Ruth was so surprised to find a gift for herself once she had gotten to the bottom of the bag and then there were still 2 more! One each for her and Rachel - each getting a pack of Dutch Blitz cards (each pack is slightly different so you can play with up to 8 players or teams). The girls had learnt the game at Church camp and were so excited when they saw what the gifts were.
Hannah loved her magnetic drawing board. Hezekiah was thrilled with his 3 dinosaurs and Asher loves her ball (I know it may seem a strange present for her but she really does love balls). 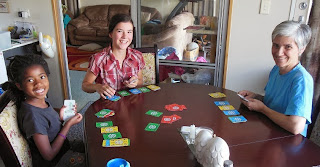 The main reason I suggested presents this evening was that I knew we had a bit of time to get a bit of Dutch Blitz in while the younger 3 had a bath. :-) Thanks Dad for watching them and giving us some time to play. I know these cards are going to be enjoyed much over the weeks and months to come and bring loads of fun family time. 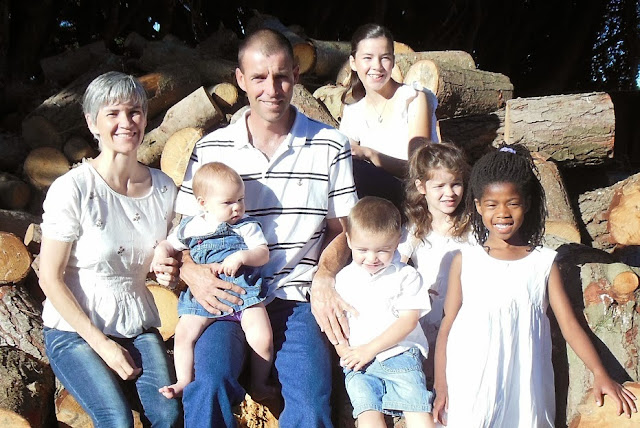 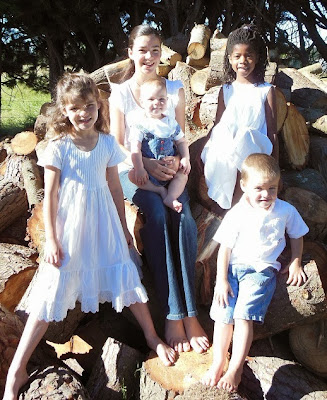 What a beautiful day Christmas day started out as. I got an idea to get a new family photo and have every one dress for it. The girls thought it was SO exciting and fun (and the boys put up with it).
We had arranged to talk to Nana at 8am - so just managed the family one and then went inside to chat to her.
We headed out again afterwards and although the sun was a bit too bright it was fun to get a few more photos.
A nice one of the children (an extra to the monthly couch photo tradition).
Someone had given us some clothing for the children and I had spotted these two dresses for Ruth and Hannah and the shirt for Hezekiah and this was the first time they had even seen them. I think that was most of what made it fun for Hannah - having a new dress to wear. 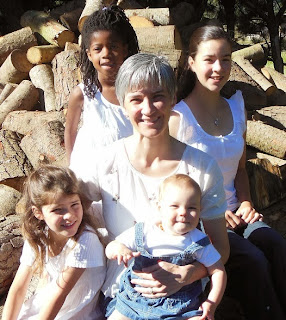 One with me and my girls.
Rachel did not have a plain white shirt so I had to quickly look through all of mine and I found this one for her. The scary thing is that it fits her so well. She really is growing up so quickly. 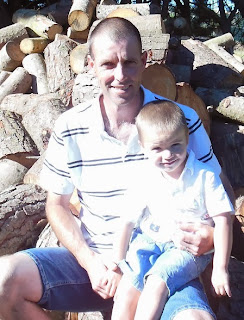 And yes - the boys just tolerated all this silliness. Thanks for your patience Brendon. They are fun and special memories for us. 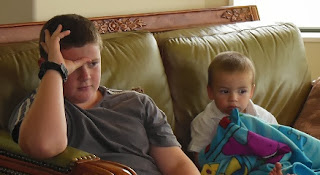 Asher then had her nap and once she was up we headed over to the Stern's for lunch. We had a lovely time with their family as we always do.
The boys enjoyed watching Chitty Chitty Bang Bang after lunch. We had brought it with knowing Hezekiah would be tired (due for a nap himself after lunch) and it did help her through the afternoon (with his Barnie blanket). 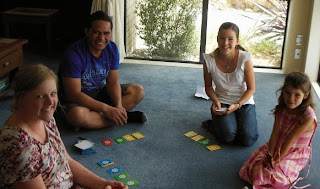 Loads of fun was had with the Dutch Blitz cards. 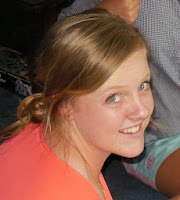 A highlight for Hannah was having so much time around Katie. Katie has managed to have a soft spot in Hannah's heart ever since Hannah was very young. It's so sweet.

We were pleased to meet Richard who we have heart a lot about from Holly. They have been very busy the last week with visiting and getting to know family and friends - so an afternoon nap on the couch went down well for them. Amazing that they could actually get rest with all the noise going on next to them. 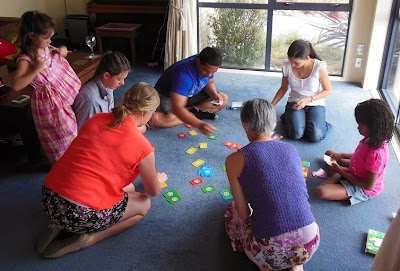 And it did get quite noisy. We had a nice long game with 6 of us. It was quite an experience for me as I had only played it with 2 or 3 others. The game can get so fast when you have so many people playing.
Loads of fun and a very special day. By the time we left after 4 (after Asher had woken from her nap) the rain was bucketing down. What a contrast to the morning.
Posted by Buckland at 10:00 PM