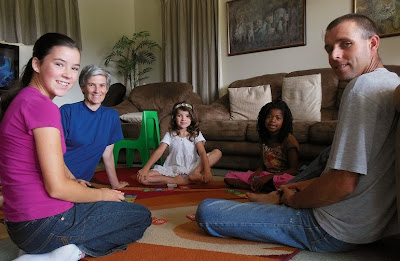 Sunday 29 December - another rainy day. After church and before lunch we managed to get in a few rounds of Dutch Blitz. I am thankful we have something fun to do together when it's so wet out. We do score when we play but adjust according to age. So Hannah does not get any negatives for her Dutch Blitz pile that is left at the end. Ruth was also getting that easier scoring until she started beating Dad and so we suggested she start getting proper scoring. The funny thing was that the next two round she got Blitz. 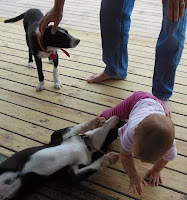 The puppies are getting so big and I wanted to get some photos of them. Zorro just loves nibbling Asher and although it freaks me out - she loves it and even laughed when he nibbled her hand. She just wanted to get to me though and would not sit still and play with him for the photo. 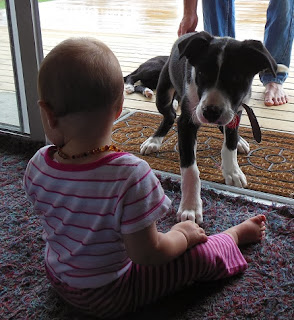 And then Zorro was so interested in my camera he would not sit still either. :-)

No work on the deck happening this week with all the rain. We were hoping to get it stained while Brendon was on leave for the two weeks around Christmas and New Year, but we have had a very wet week (starting Christmas afternoon).

Thankfully there was a bit of a break in the rain and we got out to play with the puppies.

I called Rachel to take a few photos. This was a nice action one of Hezekiah.

Zorro loves chasing balls and is really good about bringing them back too. 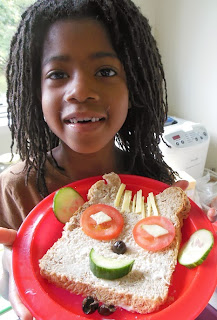 Rachel managed to take this photo just as I caught the ball.
Ruth having fun again with Hannah bread. :-) 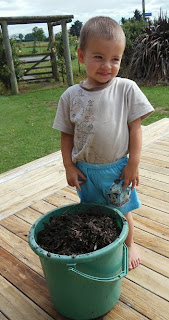 Monday 30th was yet another grey day. There was a break in the rain long enough for Brendon to get up on the roof to clear the gutters. Even though we don't have any trees near the house - he still managed to get this whole bucket load from the back side of the house (where the gutters were overflowing this last week with all the rain). He also got some other jobs done around the house as well as getting those longs steps (behind Hezekiah) fully sanded. The big floor sander did not reach to all the sides - so there was still a bit to clear.
Briar and Brooke came over for a visit again today and we introduced Brooke to Dutch Blitz. We teamed up and she learnt really quickly with Rachel. 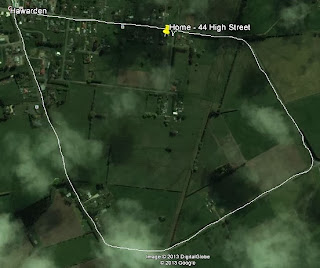 Tuesday 31st looked rather grey again so I made an early start and use of the lack of rain to get out for a walk / run. Google has a great "path" function so you can see how far a path is. Our "big block" is 3,3 km. My knee started worrying me for the last 700m but I still managed to get it done in 24 minutes.  Not bad for a non-runner. Ruth came with and managed it in 29 minutes. 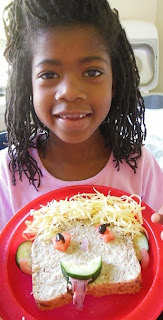 It ended up being a lovely clear day. Ruth creating another face for Hannah. Hannah gets so excited about seeing her "surprise". 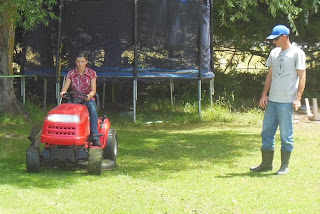 Brendon had worked on the deck in the morning but after lunch decided he wanted to get the grass cut. Rachel asked if she could try. So Brendon got her to do the easy section - making sure she could do it safely. It's going to be a real bonus when she can do it all for us. 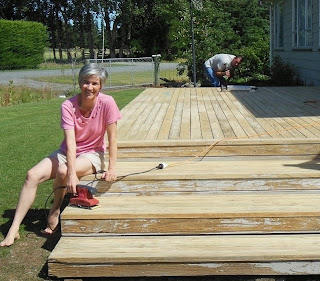 Then we got back to the deck. Once Asher was down for her nap I got sanding. Our neighbour lent us this small sander so that once Brendon had scraped as much of the paint off as he could (in the sections the big sander could not reach) I smoothed it off with this. 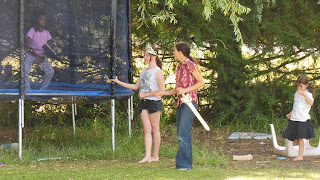 The older 3 girls happily spent the whole afternoon outside with Briar and Brooke (who had left before I thought to get a photo). It was so nice for them to get a full day outdoors. It's been almost a solid week of being stuck indoors. 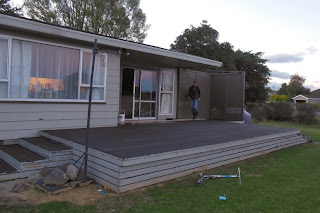 Just before 7 Brendon got started on staining the deck. Once the children were in bed at 7:30 I went out to help with the edges and other brush work. 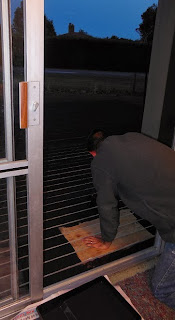 He finished just after 9:30. It's looking really nice. It will look even better once we paint the front / side sections the same colour. The paint there is well stuck on and so we are just going to paint over it to match. We were so pleased to finally have a clear day (after waiting almost a week) to get this done. We still want to get another coat on - but it's great to have the first one on.
Wow - and that concludes 2013.
We thank God for His grace and favour through the year past and praise Him for His faithfulness and love. We have had trials but have grown so much closer to Him through those trials and for that we are very grateful. Perhaps a word that would summarise what has been a blessing to me this year is peace. God's peace that truly does surpass understand.
Posted by Buckland at 10:00 PM