The year begins and then Mum is away 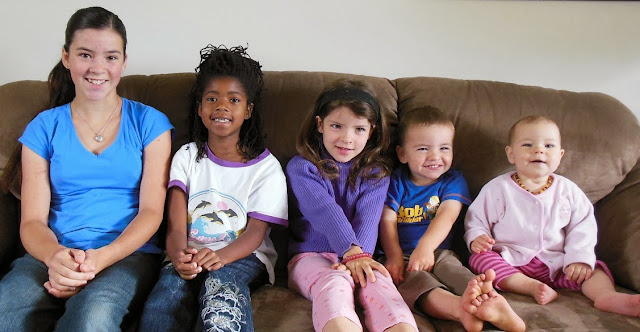 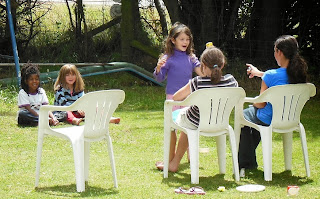 Nice and on time with the children's photo - taken on Wednesday the first of January 2014. Now that another year of photos have been taken I need to try make a video of of them all. It will be fun to watch how they have grown. I started when Hezekiah was a baby - so we have over 2 years of monthly photos already.
What a beautiful first day of the year and how better to spend it with friends. Brooke and Briar get along so well with our children and they always have so much fun. They came up with some fun game today. 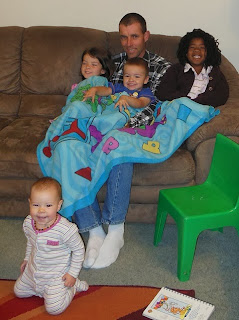 Cuddles with Dad on Thursday morning (2nd Jan). Brendon normally works these public holidays, so it has been wonderful having him home for 2 solid weeks. 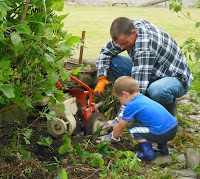 Dad made use of the "no rain" to get some more gardening done. 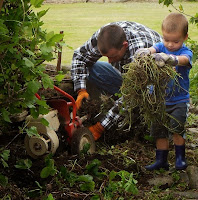 He has such a great little helper. 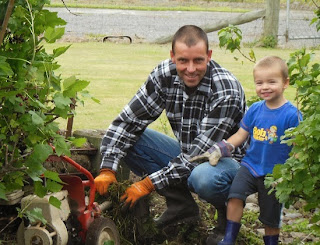 The two special men in my life. 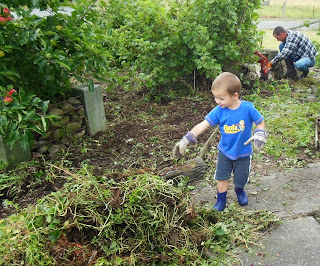 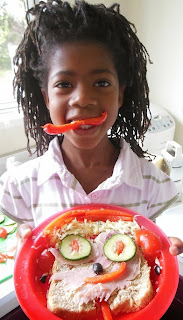 He got loads done. We have ordered some stones and bought weed mat for this area. Unfortunately the stones will only arrive later into the new year, but it's one step closer to getting this area under control.
Ruth's creative fun again at lunch time. Hannah just loves the surprise of it. 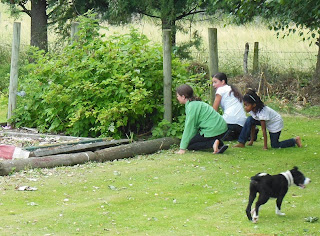 Friends over to play again today. I love the new games they come up with.

Hannah was to the left - a different part of the game. It had something to do with seeing how close you could get to the person. 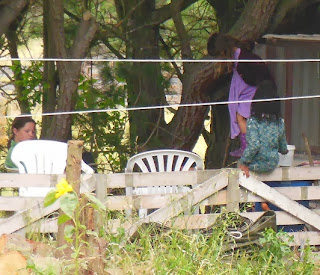 Eventually it was getting a bit wet out there (after 5pm already) but they just moved to the sheltered tree line and continued with another game. 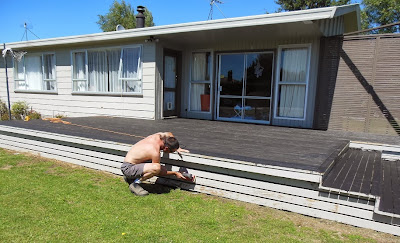 Brendon was thankful for a clear sky on Friday (3rd Jan) so that he could get some sanding work done on the side of the deck. We can't take this paint off but are just roughing it up a bit so that we can paint over it to match the top.
The top looks so good. 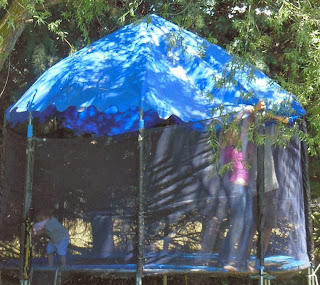 It was a lovely dry day but boy was it windy. Brendon and Rachel ran out to put some extra tape on the canopy as it was starting to lift a bit. 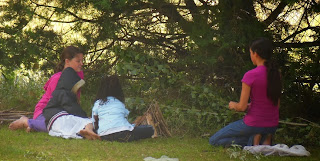 The girls found a nice sheltered spot so that they could continue with their outdoor play - only Hannah putting a jacket on because of the wind. 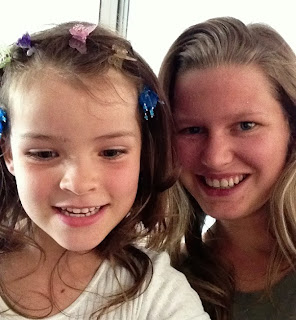 Sunday 4th was the busy day with Asher and I ending up heading into town via Ambulance. You can read about all the details here.
Brendon got different ladies to help out with the children on Monday but there were some issues with the younger ones so he came home early and stayed home with them on Tuesday. I think it was such an adjustment to having had both of us home for 2 weeks to having neither. So a day adjusting to me not being there probably helped.
Brendon managed to organise Lila Love to come and help with the children for Wednesday and Thursday and that worked really well.
The children's new iPad mini arrived (thanks Nana for such a cool Christmas present) and as I had the iPad and the camera with me I suggested they get a few photos with the iPad mini. 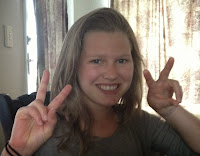 Thanks Lila for helping out. 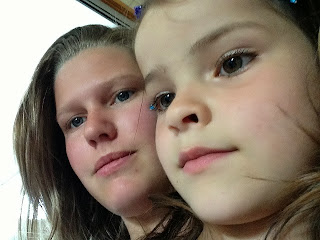 Hannah having some more fun with photos. :-) 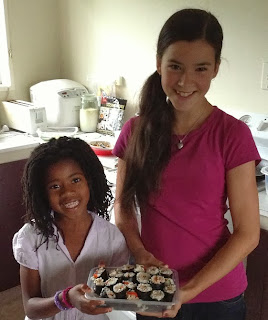 I had suggested the girls make sushi on Wednesday as the wooden bowl I had bought had also arrived. They look rather chuffed with the results. :-) 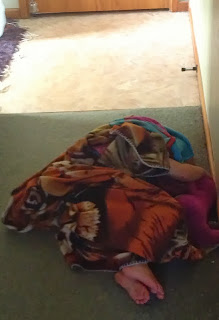 Hezekiah did not have his afternoon nap on Wednesday (Brendon said he things Rachel just forgot). So on Thursday Rachel knew he had to have a nap. So she closed all the other bedroom doors as well as the passage door (as he kept coming through) and eventually he fell asleep in the passage. All wrapped up in his blankets as he normally is on his bed. At least he got the rest he needed. Especially as they came in to the hospital for a visit on Thursday and got home late.

Rachel also made some "deviled eggs" for them to enjoy. It's lovely that the girls are able to do so much in the kitchen. They did use a few frozen meals that we had made previously - so it was good that the freezer was well stocked.
PS: The sushi photo reminded me to also make the note that Rachel and Dad even managed to keep my Kefir alive (the milk Kefir is that bottle in front of the bread machine) and Rachel made the daily Kefir smoothy for everyone too. What a blessing my big girls are.
Posted by Buckland at 5:00 PM