Puppies, wood and a swim 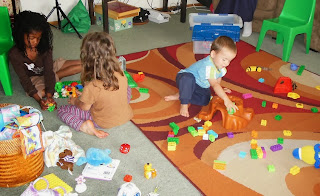 It's always enjoyable for me to see how much fun the children have with toys that have been packed away for a couple of months. 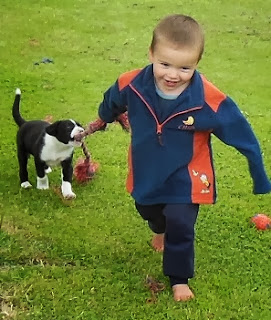 So much fun playing with Zorro. 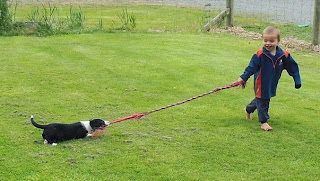 Getting energy out of both of them. 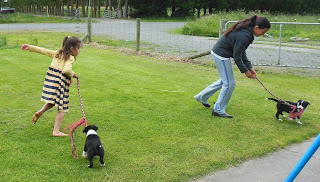 The girls having a turn. 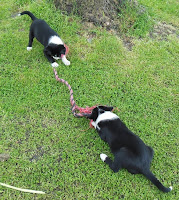 I am so glad we got two puppies. They play so nicely together. 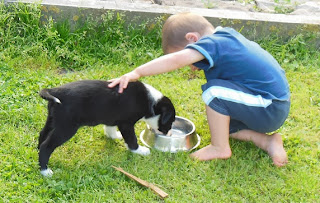 I know you normally say "don't go near an animal when they are eating" but Brendon thought it might actually be a good idea if the dogs stay used to the children being around them and even touching them when they have food (in this case some milk). 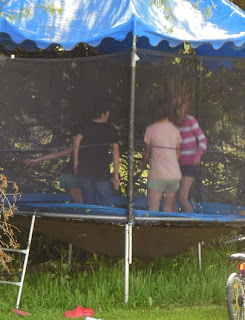 The school had holidays on Thursday and Friday because of the Show day on Friday - so we ended up with a few extra children in the garden. :-) 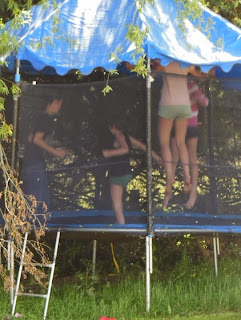 It's nice that even though these girls are not far off their teenage years - they are still happy to enjoy the trampoline. 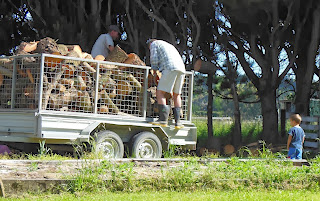 It's that time of year again.... Time to collect wood for next winter. Alby and Brendon are teaming up to do the two households together. 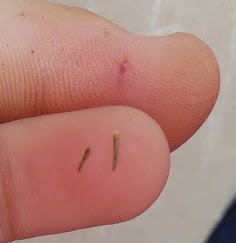 Hannah got a really bad splinter in her toe (above) on Thursday just before Holly arrived for dinner before Bible Study. I tried to get it out but it was just too big and too deep. So we put some cream on it and had to leave it. On Friday morning I tried again and ended up pulling two pieces out. I think they must be the biggest and hardest splinters I have had to do. The funny thing about splinters is that recently I got a splinter in my index finger on my right hand. I tried to get it out myself but was struggling so asked Brendon if he could do it for me. He could not even see it as it was so small. So eventually I managed to get it out myself and understood why I have been the parent that has done all the splinters. :-)

Off to the pools on Friday afternoon and I got to see this family of ducks that live just outside our properly. They are rather big now but Hezekiah and Hannah have seen them often from our garden. 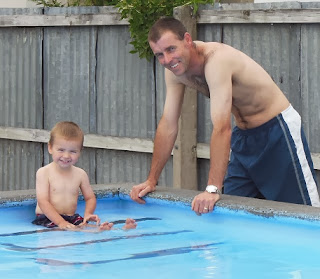 First Hawarden swim of the season and the earliest yet. I was so surprised to hear the pool was open in November already and with the solar heating the temperature was already up to 23. For mid November I think that's brilliant. Too cold for Brendon and I still - but the children loved it. 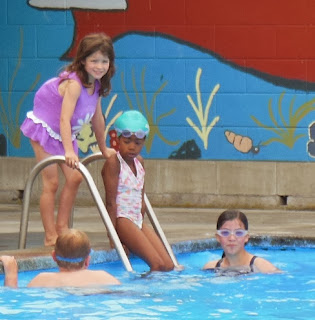 Hannah loves her "blow up" togs and it allows her a lot of freedom around the pool - as well as allowing Brendon and I to only have 1 child each to be holding or watching carefully. Hannah found it a bit chilly and did not spend too much time in the water. Rachel and Ruth however made the most of it and thoroughly enjoyed it. 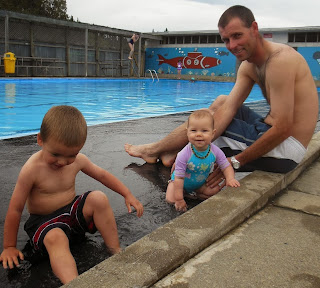 I took Asher over to the small pool and as soon as she felt the water with her feet she put her hands down to start splashing. So I put her togs on and she just loved sitting on the side of the main pool, playing in the water there. Hopefully we will have many enjoyable visits to the pool in the months ahead.
PS: I took the photo just before Rachel jumped in. If only I was a few seconds later.
Posted by Buckland at 10:00 PM